The fourth season of The West Wing sees the show continue on as strong as ever.  It is however, notable for bringing a close to the Aaron Sorkin years on the show as he left at the end of the season due to disagreements with Warner Bros.  The show also loses Rob Lowe midway through the season.  As I understand it, Lowe was first brought onto The West Wing with the intention of using him as its lead actor.  His actual role as Sam Seaborne ended up being significantly marginalized and so he opted to leave to pursue other work.  He gets replaced by Joshua Malina as Will Bailey in a role that initially is written almost as a facsimile of the Sam Seaborne character.  Thankfully, he goes on to become his own person later on.

The season starts off very strongly with the double feature 20 Hours In America.  It’s a fun start to the season that sees Donna, Josh and Toby out of the office and stuck in Indiana at a campaign stop.  While Leo tries to contain the news breaking out of an American assassination of a Qumari official, the rest of the episode is focused on the Bartlet Administration developing their ‘bigger picture’ ideas for their potential second term.  The episode finishes with one of those awesome Martin Sheen moments as he gives a stirring speech in response to the bombing of a college swim meet.  The writing is classic Sorkin and has that wonderful ‘the streets of heaven are too crowded with angels tonight’ line that I love.  And Sheen just delivers the speech like a total champion.  There’s a reason why people want a real life Jed Bartlett for president.

I think the best parts of Season Four are the heated and passionate exchanges between the staff in the administration when they debate policy and attempt to overcome a crisis.  By now, the actors have really fleshed out the nuances of their characters so there is a sense of understanding and expectation from the viewer on who takes which side.  In general, Toby and Josh remain shrewd and astute policymakers who understand what is required to pass a bill and take a pragmatic approach to accomplishing ‘the greater good’, even if it means making some concessions to the Republicans along the way.  By comparison, CJ Cregg, the administration’s social conscience, is increasingly uncomfortable with some of the decisions that Jed and Leo make, whether it is related to the Qumari assassination or the inaction taken by the administration during an African genocide.  In most Western countries, I believe that there is typically a broad uniform consensus on what it means to be a conservative which is why they typically comprise a powerful voting block.  The political spectrum for being a liberal is much wider and so its fascinating to see the cases put forth internally from the Bartlett Administration.  And of course individual characters will have their own policies that they are particularly passionate about.  Women’s rights for Amy Gardner, gun crime for Charlie, mental health for CJ and so on.

The weaker aspect of Season Four and I would say this probably applies to most of the series, is the haphazard and sloppy way that the love interests are handled.  I don’t think there is a single person in the world who watches The West Wing primarily for its romantic content but they still comprise a large part of Season Four and they remain typically abrupt in nature and frustratingly directionless.  In this season, Donna Moss hooks up with Christian Slater (?!), Josh Lyman has a dalliance with Amy Gardner and Zoe starts dating a French aristocrat.  The problem with most of the love interests in The West Wing is that the characters are almost entirely defined by their relationship to someone else.  Only Amy Gardner and Danny Concannon serve a purpose beyond who they’re sleeping with.

Overall though, this is another great season with plenty of solid episodes.  There are plenty of emotional scenes with a heavy sense of gravitas but the show also delivers its moments of humour and levity.  Who can forget Jed Bartlett bemoaning the loss of his lucky tie only for Abby to respond ‘tough’ and cut the tie he is wearing in half.

One last nit-picky criticism.  After 20 solid episodes, mostly shot in the traditional format of the show, the fourth season of The West Wing finishes with an episode that is more like something out of 24.  My favourite closer is from the third season when Bartlett addresses the media after disclosing his MS.  It feels like a suitably climatic ending in the style of the show.  Most of the other seasons unfortunately opt to do something very uncharacteristic and not particularly fitting with the tone of the series.  Sadly, Season Four is like this and ends with the dramatic kidnapping of the president’s daughter.  Sigh. 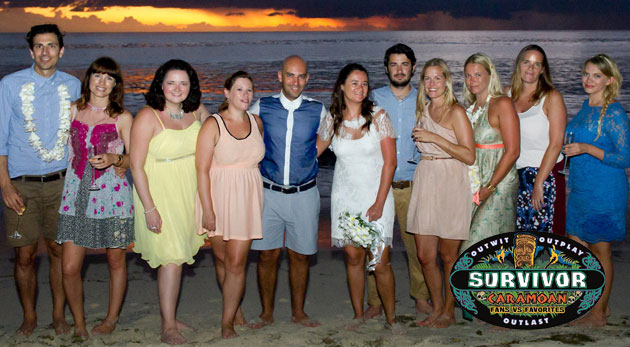 The pre-merge episodes of Survivor Caramoan:  Fans Versus Favourites II concluded last week.  It’s been a reasonable season so far that’s seen its share of dumb alliances, some typical Survivor inexperience from the fans and a memorable meltdown from Brandon Hantz.

The Fans tribe was struggling from day one as they found themselves splitting into factions immediately.  The four most attractive fans formed a self anointed ‘Beautiful People’ alliance in one of the stupider moves I’ve seen in recent seasons.  Who the hell decides to form a minority alliance of four people in a ten person tribe?  They even seemed to be shocked when they were decimated at tribal council.  The most memorably strange person in the Beautiful People alliance is Eddie.  It may be partly down to the edit but his constant self-aggrandizing and evaluation of who he would socialize with, based on looks alone, is rather bizarre.  He seems to have a pathological disorder on par with Patrick Bateman where he views other people as commodities and objects that help shape how attractive he looks.

Meanwhile in the Favourites camp, Phillip was back up to his usual tricks, giving everyone code names to be in his secret agent ‘clubhouse.’  Everyone seems to patiently humouring him, although Cochrane in particular seems to enjoy making fun of him in the confessionals.

The first half of the season however will definitely remembered for Brandon Hantz’s meltdown in episode five where he decides to destroy the Favourite’s camp.  It’s one of those ‘what if’ moments on Survivor that finally unfolded.  What would happen if someone snapped and just decided to completely destroy their own camp?  Now we know I guess.  The immunity challenge wasn’t even completed and an impromptu tribal council was held on the obstacle course while Jeff Probst tried to calm down Brandon by giving him a back rub.  It was certainly one for the books.

Now that we’re heading into the merge, it’ll be game on.  At this stage, I’d like to see Cochrane win the series but surely the front runner will be Malcolm who seems to be playing a very astute game and is looking to form his own Beefcake alliance.  Let’s see what happens.

Lastly, any major fan of Survivor would do well to check out this interview Jeff Probst did with Chuck Closterman on ESPN.  Probst talka about what goes on behind the scenes on the show and is asked some very good questions.  The casting process, memorable moments, lessons learned, the evolution of the show etc.  I think one of the most interesting things he mentions is that in a recent season, they hired two people ‘of low IQ’ who broke the suspense and tension in that season because they were too easily manipulated as pawns.  My guess is that he is referring to Leif and Christina from Survivor: One World.  It was one of the worst seasons of the show in recent memory and part of the problem was that the two of them allowed themselves to be used for votes and then didn’t make any attempt to scramble and save themselves when they outlived their usefulness.  The basic concept of the social game seemed completely lost on both of them.  Anyway, Probst says that hiring people too slow for the social game was a mistake that they hope to avoid in future.  The interview is full of interesting comments including what would happen if someone died on the show, as unfortunately was the case in France recently.  Check it out!

Tagged with: Survivor The West Wing