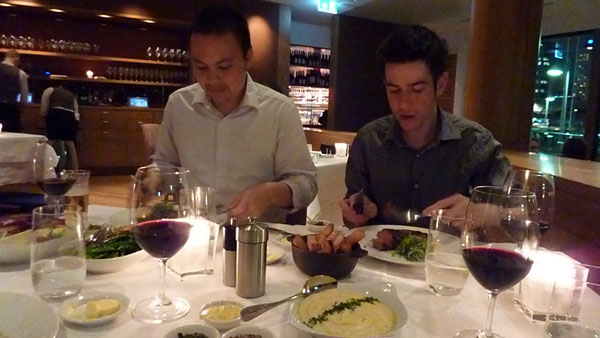 A month ago, Jen and I had a picnic in the park with some friends.  When we went to the grocery store to pick up some food for the day, we had to cater for the following dietary requirements:- a vegetarian, something suitable for a pregnant woman, a gluten-free meal and a lactose-free meal.  Pregnant friend aside, these other dietary requirements have been set in stone for some time now and aren’t fad diets.  I’m not expecting my vegetarian friend to be lured back to the dark side by a bacon sammich and I don’t expect my brother-in-law to find a renewed tolerance for lactose.

Like many Australians, the eating habits of me and my friends are changing.  Neither Jen nor I have any specific dietary constraints ourselves but the construct of our daily meals have changed.  Less meat, more vegetables and a greater diversity of ingredients (my wife puts quinoa in everything).  Over the years we’ve begun eating more meals where meat isn’t the centerpiece of the dish and we’re putting less fried melted cheese on everything.  Even though it feels like it costs a million dollars more, we eat organic where possible and choose locally sourced, environmentally sustainable food.  I’m not quite sure when or how it happened but food has become increasingly politicized in this country.

I can still remember my friend Jarrod telling me about the night he told his parents he was becoming a vegetarian and how poorly they took it.  It sounded like he was coming out of the closet to fundamentalist Christians.  But I think generally, attitudes towards vegetarians have changed a lot nowadays from what they were.  I think meat eaters used to be quite precious about their diet and would generally scoff at people who are vegetarian or try to goad them back into meat eating.  I don’t see anything nearly so churlish nowadays and I think most meat eaters (myself included), have far more vegetarian meals than in decades past.

Celebrity chef and author Anthony Bourdain predicted that in the near future, we will see a great upswing in the cost of meat and that the average diet of most people in developed nations will begin to change significantly.  I can definitely see that happening.  What I’m bracing myself for, is food becoming even more politicized and I don’t think the changing views and attitudes towards our diet will look favourably on my eating habits today.  With my affinity for dining out, I would easily have eaten twenty different animals this year including pigeon, wallaby, kangaroo, snail, squid, duck, rabbit, quail, lamb, cattle, chicken, crayfish, prawn, lobster, mussel, pig and goat.  As overpopulation, climate change and deforestation puts more animals on the endangered species list, I anticipate that decades from now, my predilection for eating so many of nature’s magnificent creatures will likely be viewed very poorly.  For now, I can slip under the radar while the fast food junkies fall under the microscope.

I remember that once upon a time when lawmakers began introducing prohibitive smoking laws, questions were raised speculatively about whether we should be ‘taxing fat people for eating McDonalds.’  The argument goes that a morbidly obese citizen is surely as great a burden on society as an ailing chain smoker.

We haven’t got a fat tax in Australia yet but we probably will one day.  As much as 75% of Australian’s support banning the advertising of fast food during children’s programming.  If we were to pass such a thing, it’d be just the beginning.  In our office we have one guy who eats KFC three or four times a week and it often constitutes dinner for his young child.  He’s basically a social pariah for that.  I think attitudes towards the obese are generally becoming less sympathetic in this country.

Personally, I’m still primarily driven by taste, not morality or health, when deciding what I choose to eat.  I’m your prototypical Gen-Y ‘slacktivist.’  I buy free-range eggs because, well, I still get to eat eggs but I feel slightly better than buying caged eggs.  But I’ve never given up anything entirely because of a political or health reason.  Slowly but surely, this is starting to make me an outlier amongst the people I know.  Sides are being picked.  One day, I’ll probably have to pick one too.