Lets talk about Alien, the greatest of all sci-fi horror films and one of the my favourite films of any genre. 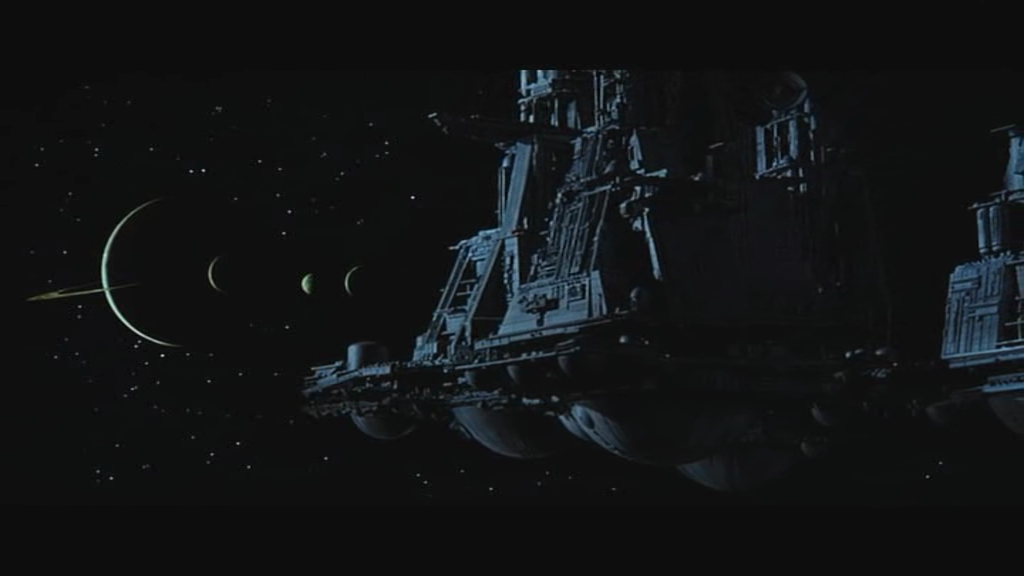 It amazes me that watching Alien in 2009, on its 30th anniversary, on my laptop, its still capable of scaring the hell out of me.  I don’t think you ever really ‘enjoy’ watching it but it certainly is affecting.

Set aboard the spaceship Nostromo, the crew are awakened from a cryogenic sleep by the ship’s computer Mother when it (she?) receive a distress call from a nearby planet.  The crew explore the planet’s surface and find a derelict ship and inside, a giant cavern which is filled with enourmous eggs.  One of the hapless crew members decides it might be a good idea to stick his head in to see whats going on inside and things get progressively worse from there.

The fantastic Giger-influenced architecture and alien designs are part of the distinct visual trademarks associated with the film that have passed down through the series and influenced scores of imitators.  This unique look was achieved through the use of scaled miniatures, fibre-glass sets and surprisingly simple visual tricks such as using children in space suits to make certain environments look bigger.  All this on a paltry $11 million dollar budget.

Alien has uncommon patience in telling its story.  It expertly builds tension over the course of its generous two hour running time.  Which certainly isn’t to say that the film is ‘slow’.  It simply resists the urge to rely too much on jump-scares and instead takes the time to follow the development of the alien as it grows from birth, changes form and gradually becomes a greater threat to the crew as it matures into an unholy killing machine.  Some of the film’s most effectively freakish and disturbing scenes are from prolonged shots of the crew member Kane who is alive but has his entire face consumed by this guy: 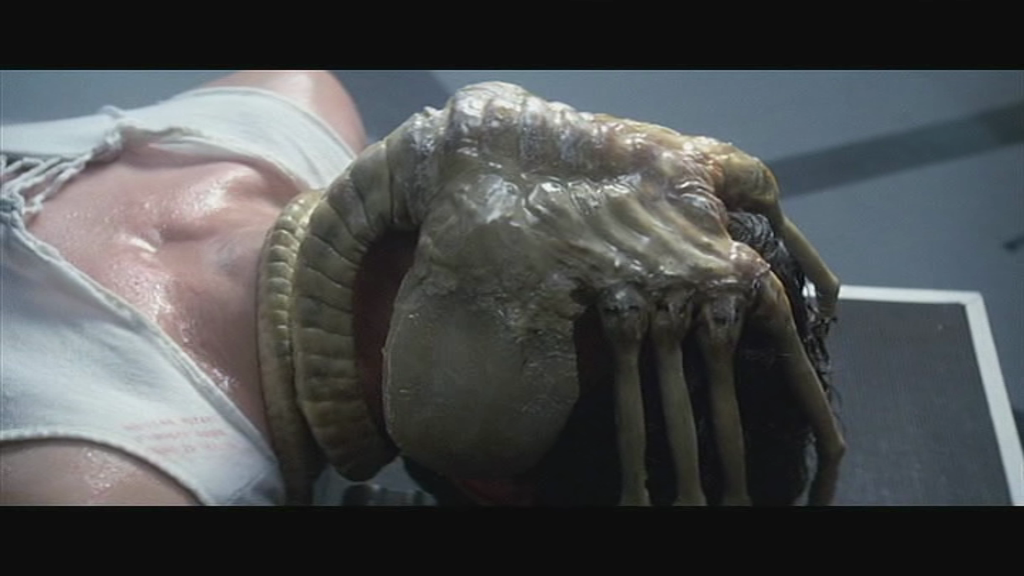 I love the detail in Alien.  The cast are excellent and convincing in their roles because they look and play their parts to perfection.  As a group of contract workers in space they are mostly in their forties and none of them are made-up to look particularly glamorous.  They are disinterested in the distress call and are more concerned over whether they will get paid overtime for the disruption to their schedule.  No one fires off snappy one-liners and instead they have every day conversations punctuated with coffee and cigarettes.  The same film made today would add ten layers of muscle and sex appeal and everyone would probably be about fifteen years younger.

Alien is the film that made Signourney Weaver into what I believe to be the only ever bankable female action star.  And yet for a film that is almost entirely permeated with a sexual subtext, it never feels like its pandering to win over a female audience.  I’ve heard it said that the Ridley Scott wanted to make a film about the male fear of pregnancy and childbirth.  Once you read about it, its impossible to ‘un-see’ it throughout the film. 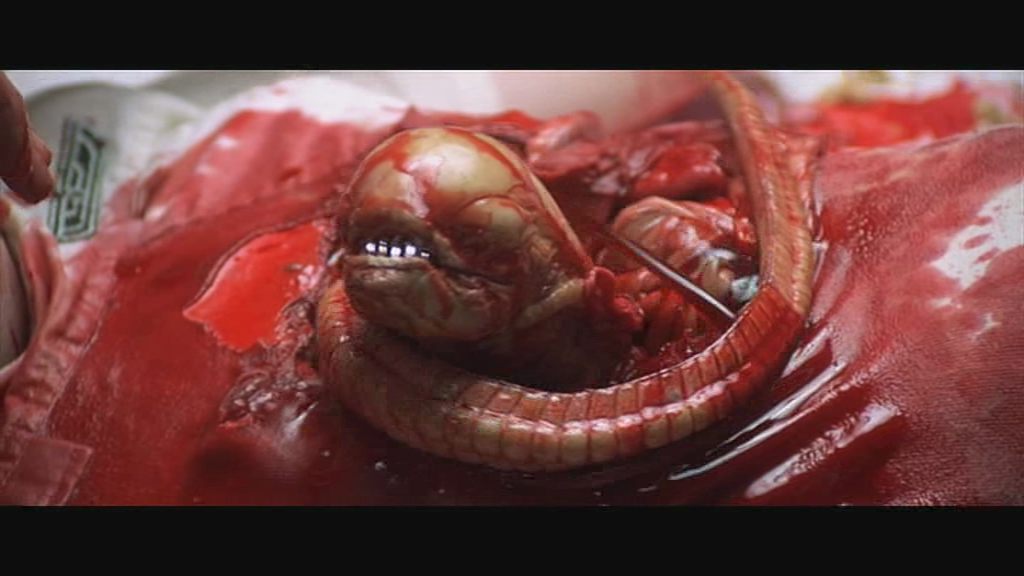 There is a lot going on in this world created by writers Dan O’Bannon and Ronald Shusett.  Like any horror film worth its salt, there is a lot of subtext and commentary about the age in which the film was made.  Corporate greed, the plight of the working class, hostile attitudes to women in positions of authority  are all themes that are explored in Alien.

There is so much to appreciate about this classic film.  Fortunately, its been given excellent treatment in its DVD releases which are complimented by some excellent documentaries about its creation.  The only thing I’m holding out for, given its recent anniversary, is the possibility of a Blu-Ray transfer.  Make it happen, Fox Studios! 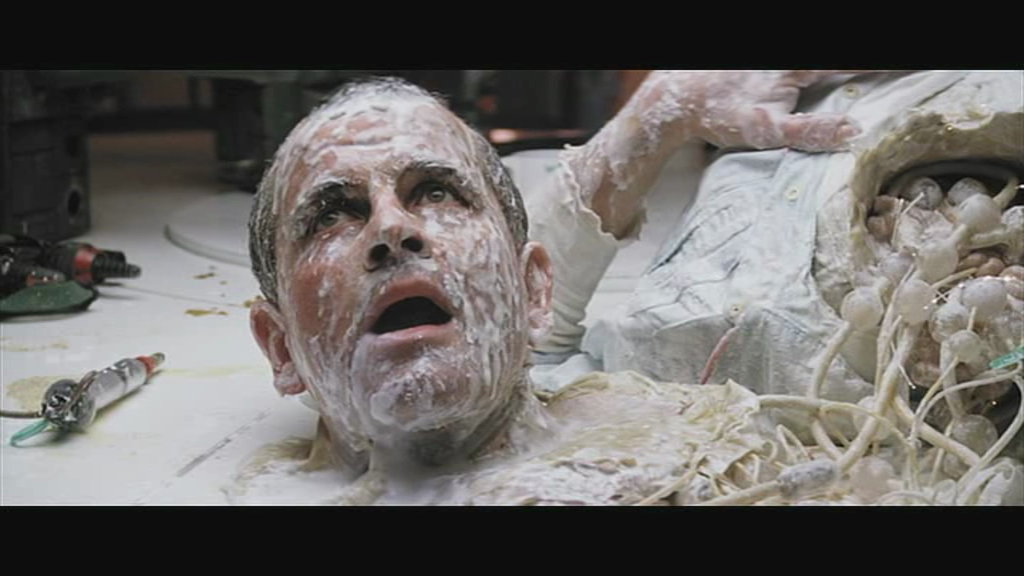 Alien: a film with sexual overtones

In space, no one can hear you scream

Summary : The greatest sci-fi horror film of all time. They don't make 'em like this anymore. 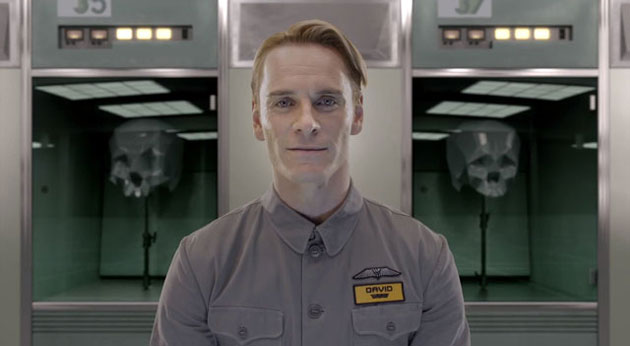 Who trains the trainers?