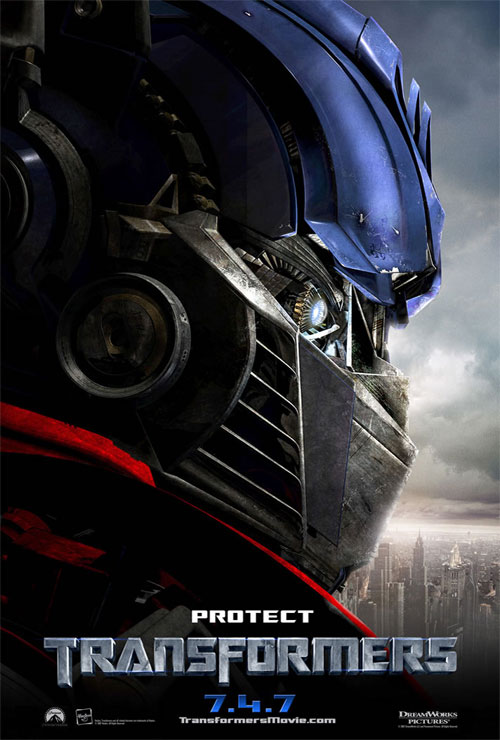 Over the past decade, Bay’s name and brand of film-making has become synonymous with both Hollywood excess and, well, crap.  After being mentioned by name in Team America‘s soundtrack for his terrible directing skills and then having his work satirized in Hot Fuzz earlier this year, Bay seemed to be well on his way to becoming permanently stereotyped as a cheesy action director on the way out (especially since The Island stunk up the box office).

Transformers comes as something of a surprise then.  Maybe it was working with Spielberg that did the trick?  Whatever it was, this film is a lot better than I suspect most people thought it would be and seems to have lead to an olive branch being offered between Bay and movie-goers.

For a license based around gigantic intergalactic robots fighting on Earth, Bay shows unusual restraint in taking his time introducing the robots and anchors the story with a simple and effective coming of age story about a boy named Sam Witwicky (Shia Lebeouf in a star-making role) who has to grow up fast, learn about responsibility and get the girl (Megan Fox).

As expected, the live action sequences with the Transformers battling in a bustling metropolis are superb.  Whats not as expected is the fantastic sense of humour that is prevalent in this film.  Best of all is character actor John Turturro as Agent Simmons.  Turturro is too much in this film as an incredibly pompous secret government agent who is constantly on Sam and his girl’s case.  The scene where Sam finally gets the upperhand and orders the agent to disrobe was a highlight.

Being one of the most recognizable licenses from Eighties, the era which spawned a million nit-picking internet film critics, I think Bay has a lot of fun at their expense, with some hilarious nerd-bating lines such as a passerby remarking ‘this is even more amazing than that movie Armageddon!’ and referring to a yet unseen character as the “world’s best hacker” and then revealing him to be the big fat guy from Kangaroo Jack (Anthony Anderson).

Hopefully, the success of this film means we are seeing a rejuvenated Michael Bay returning to the form that made him famous in the mid-Nineties.  Although Transformers 2 & 3 seem pretty much a given, I also look forward to seeing what other projects he works on next.  After a successful Transformers film helmed by Michael ‘Pearl Harbor’ Bay, anything seems possible.

More than meets the eye

Summary : The action is standard Michael Bay fare but I wasn't expecting the sense of humour that comes along with it. Fun, exciting and a excellent homage to the classic cartoon.

Previous: Knocked Up
Next: 4: Rise of the Silver Surfer