TV Show Round Up: Wrestlemania 29 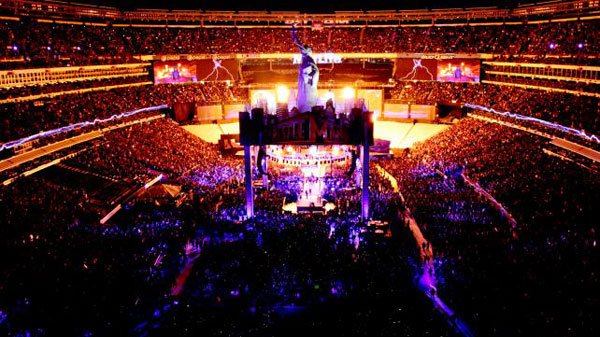 Wrestlemania 29 – 80,000 strong at Metlife stadium. For all the company’s ups and downs in the last decade, there’s no denying their success in turning Wrestlemania into a massive marquee event

Wrestlemania 29 won’t likely be remembered as one of the all time great Wrestlemanias.  It doesn’t come close to the best – VIII, X, XVII, XIV – but instead it fell somewhere in the middle.  The impressive Met Life set design, sellout crowd and excellent CM Punk vs Undertaker match were all big positives but some of the main event matches didn’t really deliver, most notably John Cena vs The Rock II which was mostly notable for how derivative and lackluster it felt.  Here’s a recap of the whole event.

From the get-go, Wrestlemania 29 seemed rushed and under the pump to fit everything in.  The show was notable for scrapping a planned eight man tag match, the singing of the national anthem or the use of any backstage segments whatsoever.  It was match after match and even then, you could tell certain bouts were cut short.  Jack Swagger made his entrance to the World Heavyweight Title match in a camo-vehicle but there wasn’t enough time to fit it in.  So instead he was given a jobber entrance – already in the ring when the cameras turned to him.

The opening bout was The Shield vs Super Best Friends.  It was a solid opening encounter and it turns out the friends weren’t so tight after all.  After some bickering over who should tag in, Randy Orton was eventually overcome by the teamwork of The Shield and beaten cleanly after a spear from Roman Reigns.  Clearly someone up high is pretty big on The Shield who remain undefeated in six months.  This is pretty extraordinary when you consider their opponents have been exclusively babyface main eventers.  Meanwhile Randy Orton continues to tread water.  He’s one of the company’s few main eventers but he’s sitting on two strikes for failed drug policies so the company seems reluctant to do anything with him.  It was a solid opening encounter though.

Ryback vs Mark Henry was a pretty slow, pedestrian affair as you’d expect from a couple of musclebound giants.  The match ended when Ryback lifted Henry onto his shoulders only for Henry to grab the ropes, causing Ryback to drop the weight of his opponent onto his own head (!).  It was a curious booking decision.  After spending the better part of a year building up Ryback, they’ve had him lose every pay-per-view match he’s been involved in since October.  I hope he gets some traction soon otherwise he’ll end up in that midcard hell currently occupied by Kofi Kingston, The Miz, Antonio Cesaro and Wade Barrett who endlessly trade wins and loses with one another ad nauseum.

Team Hell No vs Dolph Ziggler and Big E Langstonwas everything I wanted it to be.  The match got a decent amount of time and Daniel Bryan finally got to have his moment in the sun, defeating Ziggler and celebrating with a jubliant crowd afterwards.  The sight of Bryan leading a chorus of fans chanting ‘YES!’ put a smile on my face. Chris Jericho vs Fandangoended with Fandango picking up the upset victory in a passable match with a botched ending.  I remain unconvinced with Fandango’s ability to work a match of any length.  After Jericho lead the opening ten minutes of the match I thought Fandango looked nervous as hell when he was trying to dictate the pace of the closing minutes of the match.  On the plus side, he may have stumbled onto a job-saving goldmine the following night on Raw when the New Jersey crowd began to hum along to his theme song and dancing.  If that catches on, he will be over as a performer no matter how much he sucks in the ring. 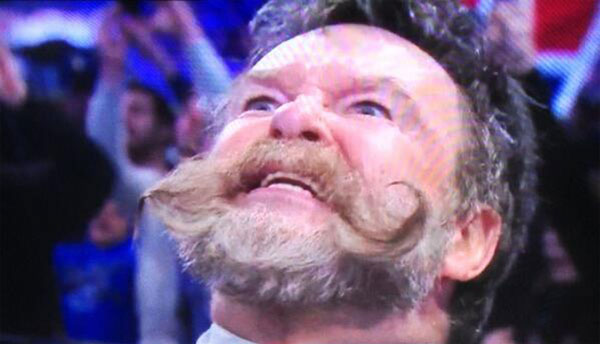 Dutch Mantell’s moustache is a thing of beauty. He cut a pretty good promo before the World Heavyweight Title match too where he criticized America’s multiculturalism to draw some decent heat from the New Jersey crowd.

I don’t know what I was expecting for Alberto Del Rio vs Jack Swagger but we got a reasonable encounter that was alright but not exactly a classic.  The strange thing about this encounter was that it is readily apparent that the two most over performers are the two respective valets – Ricardo Rodriguez and Zack Coulter.  I can’t really put all the blame on Swagger and Del Rio though.  Both have been victims of some spectacularly haphazard booking that makes it hard for the crowd to seriously engage with both performers.

Easily the match of the night and one of my favourite Wrestlemania matches in a long time was CM Punk vs The Undertaker.  Both wrestlers had great entrances.  Punk had Living Colour perform Cult of Personality live and Taker had a great entrance that had a visual of the souls of the damned reaching out for him. 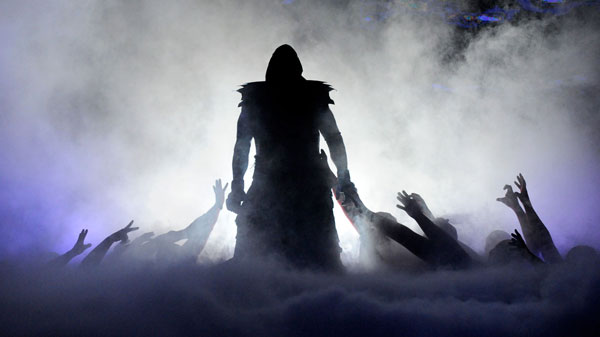 The best thing about this match is that the setup is really simple – The Undertaker wants retribution on Punk – and the outcome is really obvious – Undertaker wins – but the journey that these two wrestlers took to get us there was memorable.  It started from the opening bell when Punk slapped Taker in the face, ducking and weaving from Taker’s enraged flurry of punches.  Throughout the match, CM Punk trolled the audience by having the audacity to mimmick trademark Undertaker moves, like the rope-walk, and by constantly evading the chokeslam at the last possible moment.  By the end of the match, the crowd was baying for blood and wanting to see Punk get his come uppance.  The Undertaker deserves credit for being willing to go along with Punk getting the upperhand for so long but he also showed an excellent understanding of timing and when to deliver his comeback.  This match told an excellent story and in that way it reminded me of classic matches from Bret Hart, Shawn Michaels, Chris Benoit and Kurt Angle.

Triple H vs Brock Lesnar was a lacklustre match with a strange ending where Triple H went over for reasons best known to Trips and Vince alone.  Triple H is practically retired anyway so why he needed to win is beyond me.  Lesnar has been giving a contract extension to continue performing at high profile main events but a large part of mystique has already been squandered.  He’s got a 1-2 track record since his return and has been cleanly beaten by John Cena and Triple H.  It doesn’t really leave him with much to do.  The speculation is that he will likely be used in a Wrestlemania main event next year against The Rock.  It’s another weird rematch, this time a follow up to their Summerslam encounter from 2002, in a follow up that no one I know is clamouring for.

This particularly match was a surprisingly slow encounter with a long drawn-out finish.  Since the show ended, its been revealed that Lesnar suffered a concussion early on and that Triple H burnt himself on dry ice during his entrance which both likely contributed to the poor quality of the match.  You get the sense though that for whatever reason, these two don’t particularly have great chemistry together.

The main event of John Cena vs The Rock was a strange and disappointing ending to the night.  As mentioned before, the show felt rather rushed and after a cluster of other wrestlers getting special treatment for their Wrestlemania entrances, these two were rather unceremoniously bundled out there.  They proceeded to put on an indy-riffic contest where they had a completely forgettable pre-amble that didn’t mean anything before lurching into a prolonged exchange of finishing moves for the end of the match.  There was absolutely no rhyme or reason to any of this.  You hit your finishing move.  I’ll hit mine.  Now you do my move and I’ll do yours.  There was absolutely no sense of momentum and no build towards a final move.  Which is why the crowd largely responded with surprised apathy when John Cena eventually got the pin.

The match finished with a chorus of boos from an uninterested crowd who hated the match, hated John Cena and hated the trite handshake of respect that finished the match.  Desperate to pop some kind of cheer from the crowd, they played The Rock’s music and had Cena point at The Rock in adulation but even that didn’t work.  Considering that conclusion – John Cena finally gets the best of The Rock – has been 3 Wrestlemania main events in the making, it was an unmitigated disaster.  Imagine if other Wrestlemania moments culminated in such apathy from the crowd.  Hogan slamming Andre.  Randy Savage reuniting with Miss Elizabeth.  Shawn Michaels winning his first heavyweight title.

It’s such a well worn subject that barely warrants repeating but its absolutely extraordinary that the WWE have persisted with John Cena as their top babyface performer for a decade.  His reign at the top now exceeds Hulk Hogan’s original Hulkamania run in the Eighties and yet he has been in main event after main event where the crowd has soundly rejected him and booed him mercilessly.  Ten years of commentators having to pretend like the crowd isn’t vociferously cheering the other guy, desperately hoping for Cena to lose.  It’s now become a strange kind of stand off between Vince McMahon and his audience.  He refuses to turn Cena heel or try anyone else at the top but the fans are just as stubbornly rejecting Cena as the top dog.  The sad thing is that there’s no reason this can’t go on for another ten years.  Cena works a very safe style that doesn’t put too much wear and tear on his body so he could comfortably keep working the same match till Wrestlemania 40.

The first half of this show was excellent, culminating in the fantastic CM Punk vs The Undertaker match which will go down as a classic.  The second half, the Main Event, was trash.  It was kind of like an old WCW PPV from the mid-Nineties that way.