Central Coast Mariners’ coach Graham Arnold never won a title as a player.  His club Sydney United once made the finals in the old NSL football competition but were defeated in the knockout stages.  He later went on to manage the Socceroos but could not lead them to World Cup qualification in 1997.  They lost on the away goals rule against Iran despite leading 2-0 at one stage.

He then went on to coach Central Coast Mariners who had appeared in three of the past seven grand finals in the A-League without ever winning anything.  Most famously, his side was winning 2-0 against the Brisbane Roar in the 2011 Grand Final before eventually losing to penalties.  Graham Arnold had a distinguished career as a player and a coach and he never won anything.  Leading a game 2-0 was his worst nightmare.

On Sunday he finally, finally won some silverware in his 30 year career of playing and coaching.  In the grand final against massive crowd favourites Western Sydney Wanderers, the tiniest club in the competition won in a surprisingly comfortable 2-0 performance where they dominated possession and made the most of their opportunities.  For the Wanderers and their fans, they basically experienced the worst case scenario that I feared when the Roar entered the 2011 final on a massive winning streak.

The game wasn’t nearly as exciting as the previous two grand finals which both featured dramatic last-gasp come-from-behind victories.  But not every final is destined to be such a spectacle.  Having said that, it was a sight to see Allianz stadium sold out in Sydney with 45,000 fans generating a fantastic atmosphere for the full ninety minutes.  It was a great milestone for the league and its continued development and prosperity. 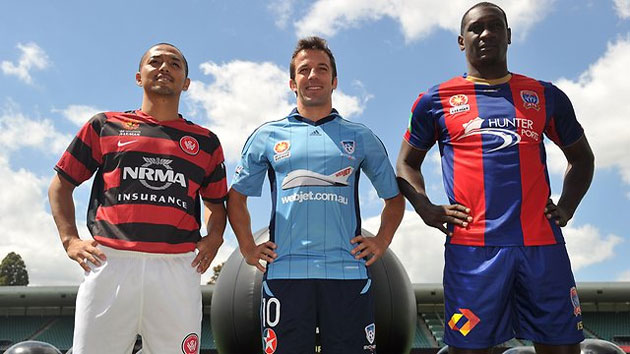 The eighth season of the A-League will definitely be remembered for the fairytale run by the Western Sydney Wanderers and for the impact made by the three marquee men – Alessandro Del Piero, Shinji Ono and Emile Heskey.  It was a season that saw average attendances up, tv ratings on the rise and an improvement in the standard of football on the pitch (unless you support Melbourne Heart).  The game’s many detractors have had to switch from saying the game is unpopular and has poor quality matches to criticizing the fans and pretending that hooliganism is on the rise (it’s not).  I guess it’s some sort of progress?

And what of the teams themselves?  Where do they go from here and what can we expect in Season Nine?

Aftera tumultuous season for the Roar where they fired their coach, sat bottom of the table in October and had rumours flying of distension in the locker room, the club and its fan must be pretty happy with how the season finished.  They secured fifth place in the competition and were one game shy of making a third grand final.  Mike Mulvey has certainly made his mark as a coach and although not every single one of his decisions has worked out (Stef Nijland was no replacement for Mitch Nichols), there is plenty of choices he made that were fruitful for the club – the defensive pairing of Donachie and North, the promotion of Franjic to wing and the improving cohesion of Lustica and Bratten as lynchpins in the midfield.

The Roar released the much maligned Matt Jurman in the offseason, alongside James Meyer and Stef Nijland.  I’m sad to see Meyer go.  For the upcoming season the task at hand for the Roar must surely be to find a top quality striker to partner up with Berisha who was good value for his 14 goals but needed support from the rest of the team.

A huge benefit for the Roar in the next season is their talent retention.  Other than maybe Mitch Nichols, I don’t believe the club is at risk of losing any of their other major players who clearly seem very settled with the club.

The Wanderers would be thrilled with their performance in their maiden season.  Everything came together both on the field and off it.  They also have managed to retain the services of Shinji Ono for another season which is a huge boost for the club.  I presume that like the Roar, the Wanderers will be keen to find a new striker and offload Dino Kressinger as he contributed a measly two goals to the campaign.  The rest of the club obviously gels well together and I don’t expect any other major changes.

They’re the smallest club in the competition and yet they’re the most competitive and consistent.  Bet against the Mariners at your peril but I think they are finally due for a massive decline in form.  Their two best players, Danny McBreen and Patrick Zwaanjswik, are both north of 36.  Worst still, Graham Arnold has followed Ange Postecoglou’s playbook and left his championship winning side for a coaching job in China.  They won’t be horrible in Season Nine but it will be the start of a decline.

The club is in a great position with Ange Postecoglou at the helm.  They had a solid season and were a permanent fixture in the top four on the table which is some achievement considering their past form.  You get the feeling that the current squad still isn’t quite good enough to go all the way and the loss of Marco Rojas to Europe will hurt.  But have faith in Ange Postecoglou’s savvy recruiting skills and expect them to come back bigger and better next year.  Their biggest challenge is consolidating their leaky defence.

I had planned to write about howwould be better off under coach Frank Farina and how the club would learn from the lessons of this season.  They would finally sign up some decent young players, make the most of ADP’s experience and talent and be a genuine title threat next year.  Then I learned that they signed Matt Jurman.  I can’t imagine a backline with Jurman, Thiago and Fabio.  Those are some of the worst players in the entire league.  They remained doomed to underachieve.

Goddamn, what happened at AUFC?  The club was riding high and in the top two for the first half of the season and they’ve been a disaster ever since John Kosmina left as coach.  Even the current recruiting process for a new coach has been a shambles with the coaching panel quitting in a public fashion.  I think the club’s director Greg Griffin needs to get his shit together.  The moral is sapping the player’s confidence and its affecting their performance on the field and their ability to retain talented players off it.

Unless they really get it together in the off season, they’re currently on track for a miserable Season Nine.  Although the club finished fourth in the league, their current form is woeful with just two wins from thirteen games.

The club seems to be in pretty good hands under new coach Alistair Edwards.  The club is undergoing a similar rebuilding phase as the Roar did after Frank Farina’s exit.  They had too many aging players who seemed to get picked irregardless of form.  I don’t think they’ll be challenging for the Premiere’s Plate next year but they will make a decent run at the finals.  They need someone to partner up with Smeltz.  He had a relatively quiet year for scoring goals by his high standards and no one else at the club was able to support.  The club didn’t have a single player score over ten goals all season.

John Aloisi has pretty much blown up the team and started again after they finished second to bottom this season.  It was the right call.  The Heart basically ran out of steam with the current crop of players and it did them no good having a captain in Fred who was perpetually injured.  Who knows what they’ll look like next season.  Seems reasonable to expect a rebuilding phase next season.  Surely the goal will be to make the finals and finish fifth or sixth.

The Jets are a strange side in that they never seem to spend their season anywhere near the bottom of the table and they’ve been a pretty consistent side and yet here they are missing out on the finals for a second consecutive year.  Surely its time to start asking questions of Gary Van Egmond and whether he’s the man to get the most out of the players in his side.  Nikolai Topor Stanley, Mark Bridge and Jeremy Brockie are all big players thriving at other clubs now that were relatively unremarkable during their time at the Jets under GVE’s tutelage.

Uh, the only way is up, I guess?  The club massively underachieved in Season Eight, unexpectedly picking up the wooden spoon.  They started out promisingly with a first round victory over Sydney FC and then never lived up to their potential.  I’m told that some backstage politics played a part in the club’s low morale.  It will be interesting to see the side without Ricky Herbert but the club will surely improve next season.  They have too many good players not to.