Don't Miss
Home > Film > The Girl Who Played With Fire 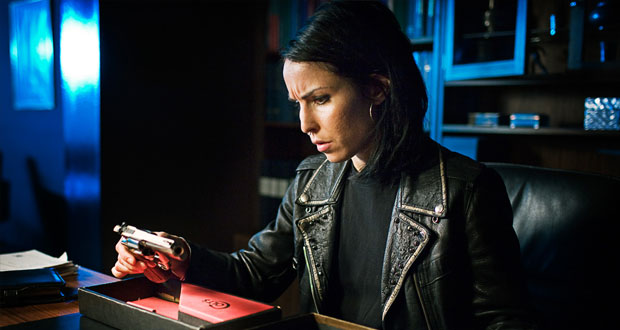 The Girl Who Played With Fire is the second installment in the hugely popular Millenium trilogy written by the late Stieg Larsson.

The renowned Swedish journalist Mikael Blomkvist and his publishing company Millenium are about to publish a news story written by freelance writer Dag Svensson which is an expose on sex traffickers in Sweden.  The article also identifies a number of prominent policemen and politicans as part of their clientelle.  On the eve of its publication, Dag and his girlfriend Mia are executed and a gun with Lisbeth Salander’s fingerprints on it are left at the scene of the crime.  Soon the police are sparking a nationwide manhunt for Salander who herself is busy hunting down her evil father Zala, an ex-Russian military officer who defected to Sweden.  To make matters even more complicated, a deranged seven foot tall goon who is impervious to pain is on the prowl…

Picking up where the first film left off, this adaptation of the second novel is a pretty faithful adaptation, only just like the first film, its a little bit selective about its inclusion of the fifty-seven different sex scenes (approx.) that are in the book.  I think wisely, they opt not to include Lisbeth Salander’s sexual escapades in a shed in the Carribean with an underage boy.  I wasn’t really sure what Larsson was going for with that scene in the book and I guess the producers weren’t either.

The recurring theme of mysogynistic men and their treatment of women is once again a major backbone to the story only this time the pacing of the story has shifted.  While the original novel was comparable to a Agatha Christie who-dunnit, this sequel is a lot more action packed and generally delivers more on Lisbeth getting her sweet retribution on a number of men who have harmed her and other women.

That said, part of the fun of watching this Swedish adaptation is how it bucks a lot of Hollywood conventions for an action thriller movie.  There are no love interests in the film.  When the film reaches its climax and Blomkvist is driving across the country to reach Salander, he’s not swerving into oncoming traffic and racing against a clock with the soundtrack pumping.  In fact, we see him stuck in a traffic jam and he also stops for a nap on the way.

While The Girl Who Played With Fire is a good deal more sensationalised than The Girl With The Dragon Tattoo, its still an enjoyable ride and once again, Michael Myqvist and Noomi Rapace do an excellent job portraying the central characters.  I have a sneaking suspicion that the film might be difficult to follow if you haven’t read the book but for fans of the series, this is definitely a satisfying and worthy adaptation.  Bring on the The Girl Who Kicked The Hornet’s Nest.

Summary : A faithful adaptation to the second instalment of the Millenium book series

User Rating: Be the first one !
60
Millenium trilogy Stieg Larsson The Girl Who Played With Fire 2010-10-13
Edo

Tagged with: Millenium trilogy Stieg Larsson The Girl Who Played With Fire

TFW Book Club: The Girl Who Played With Fire by Stieg Larsson