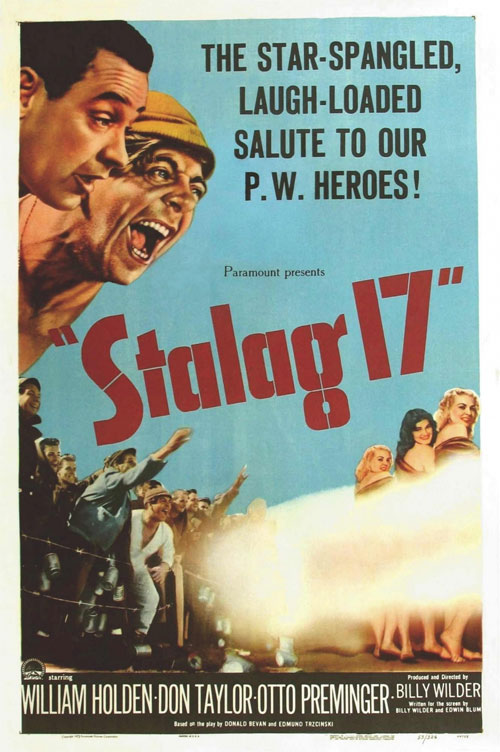 “Maybe he wanted to steal our wire cutters.  You ever think of that?”

Stalag 17, a World War II comedy set in a POW camp, begins and ends with a daring escape.  Sandwiched in the middle of it all is a ribald comedy about a group of burly American soldiers doing their best to survive imprisonment at the hands of the Nazis.

Believe it or not, the inmates of Stalag 17 have it comparatively easy.  They report to Oberst Von Sherbach, played by the irrepressible Otto Preminger, a plump and cheery commandant who loves laughter and oddly seems to crave the approval of the POWs.  We don’t see much of the other Stalags but you imagine Von Sherbach to be one of the more laid back military officers in movie history.  He shares a similar temperament to  Captain Renault in Casablanca but not the same moral compass.

The film is narrated by an inmate named Cookie but the core group that we follow in Stalag 17 are Price, Blondie, Animal, Duke and Shapiro.  They are the alpha males of Stalag 17 and are constantly hatching schemes big and small, whether its smuggling in a radio for listening to news on the front, sneaking into the ladies delousing cabin to perv on them or planning an escape out of the camp.  Invariably, all their plans come unstuck.  Von Sherbach finds the radio.  He learns when one of the new POWs – Lieutenant Dunbar – confides to the group that he blew up a Nazi ammunition train.  The film begins with two POWs trying to escape the camp.  The plan is meticulously constructed but the Nazis seem one step ahead and waiting guards shoot the men dead as soon as they set foot outside the camp. 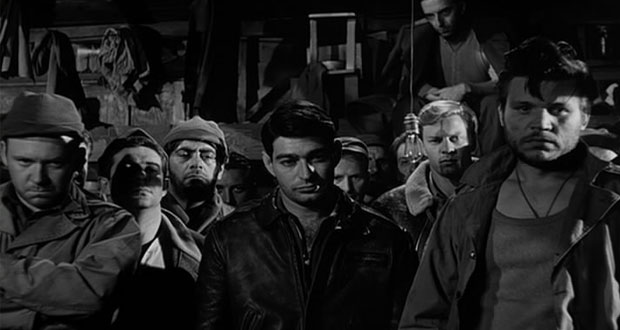 The group begin to suspect that there is a mole in Stalag 17.  A stoolie who rats out their plans to the Nazis.  They suspect Sergeant Sefton.  Sefton is the most resourceful man in Stalag 17.  He openly trades favours with the Nazis for better food, blankets and other luxuries.  He takes money off the other inmates by selling them alcohol from his still, taking bets on mouse races and charging for looks through a telescope pointed at the women’s camp.  He confidently predicts that the escapees won’t make it any further than the woods and he is right.  The rest of the camp resent him for it.

Stalag 17 is a whodunnit set in the POW camp but at its heart, it is a film about how proud American military men deal with confinement and authoritarianism.  At various stages of the film they are bored, angry, lusty, scheming and supportive.  In such close quarters they sometimes lose their temper with one another.  But in their darkest moments, they are also there for one another.  One of the saddest inmates of Stalag 17 is Joey, a man so tormented by the sight of his battalion being gunned down that he has become a introverted mute. 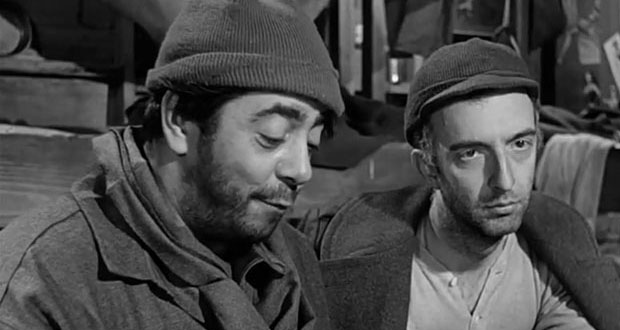 The body of the film focuses on the indomitable spirit of the Stalag 17 POWs.  Mostly this takes the form of their harebrained schemes to ridicule the Nazis and to satiate their needs whether it be for gambling, booze or women.  William Holden won a Best Actor Oscar for his role as Sgt Sefton but the scenery chewing twosome that really steal the show are Animal and Shapiro.  Their antics improbably turn parts of this film into a screwball comedy.  They bicker like a married couple, constantly torment their Nazi captors with pranks and they seem unerringly like a prototype of the characters in M*A*S*H and frat house comedies that followed nearly three decades later.  For me they were a highlight in this film.  Entertainingly daft and never failing to draw a smile.

As with so many of Billy Wilder’s films, Stalag 17 is a quality piece of work because it is populated with well rounded and interesting characters who are enjoyable to watch bounce off one another.  Wilder has a sure footed confidence with his direction that sees him to weave together a film that has moments of both darkness and levity, often switching between the two in a single scene.

There are some interesting points of trivia about the film.  As I mentioned earlier, Holden won a Best Actor award at the Oscars for his role here.  I’m not totally sure why this is.  You could argue he isn’t even really the lead actor.  I think it was an apology Oscar for not giving him one earlier for his work in Sunset Boulevard.  Regardless, Holden’s acceptance speech holds the record to this day for its brevity.  He simply said ‘thank you’ and left the stage.

Another curious tidbit about the film is that it was shot chronologically and the cast were supposedly kept in the dark until very late in the film as to the identity of the mole.  I don’t know how much of a difference it made to their performances but I will say that I wasn’t able to correctly pick the person out.  I like a good whodunnit as much as the next guy and this one was a pearler.

What else is there to say about Stalag 17?  It is an entertaining World War II pot boiler that serves up mystery, drama and plenty of laughs.  This has it all.

Summary : An inventive and thoroughly enjoyable WW2 film that has a little bit of everything. Holden won the plaudits for his role as Sefton but its Animal and Shapiro that made this film memorable for me.