I woke up this morning to check out the groups drawn for the World Cup in South Africa next year.  I got three teams I’m rooting for: Japan, New Zealand and Australia.  Here’s a quick breakdown of how we went.

I was a bit disappointed about this grouping really.  I was hoping we would get Italy so we could crush them as payback for when they stole the 2006 World Cup from us.  We have a good history of beating Ghana so I think thats pretty much 3 points in the bank and then you’d imagine that we’d only need 1 point from either Germany or Serbia to advance.

I can’t say I know much about what Cameroon is like on the World stage any more.  I always imagine them to be pretty good because my first real memories of a World Cup are the Italia 1990 one when Roger Miller was kicking all sorts of ass for them.  Frankly, this entire group looks hard as hell so sadly I can’t really imagine Japan advancing beyond the group stages.

New Zealand got the group Australia should have been in, dammit.  Oh well, the Socceroos can play vicariously through the All Whites and I’ll have to settle for New Zealand beating Italy.  1-0 is fine.  Nothing fancy.  As for the rest of the group, I guess its always going to look uphill for NZ.  Still, they do have the best striker in the world class Hyundai A-League so that has to count for something.  :p

Finally, here’s my predictions of how the tournament will play out: 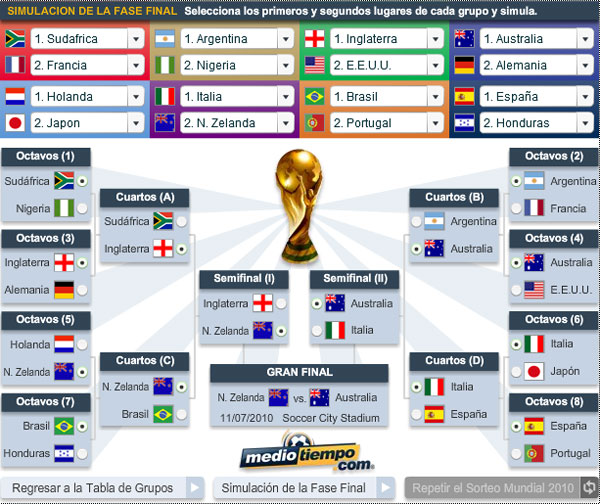 Previous: The Mildly Disappointing Summer of Cricket
Next: Busy Week of Stuff Going On