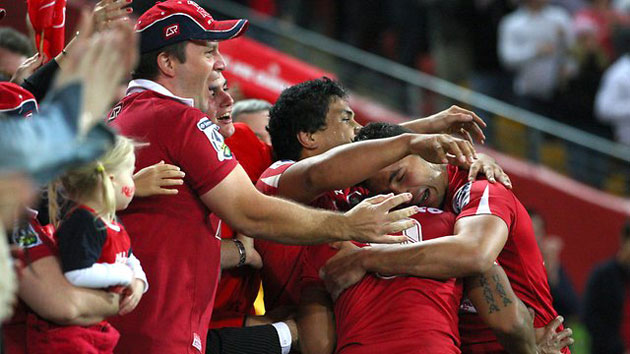 The last time I blogged about the Reds, it was Round 16 of the competition where they rather unexpectedly lost to the unfancied Brumbies.  Since then, the team have bounced back and won two away games against the Force and the Chiefs to secure the top spot in the competition and make their first finals appearance in a decade.  It turns out, I picked a good year to buy season tickets.

The semi final was a home game against the in-form Blues from Auckland who finished fourth in the competition and knocked out the NSW Waratahs the week before.  The game would be the Reds’ fourth attempt at qualifying for a grand final.

I felt incredibly nervous in the build up to the game.  I thought the Blues looked great against the Waratahs the previous week and I remember how they stormed back against us in the regular season from a 24-0 deficit to only lose by a margin of six points at full time.  They were a dangerous side and I had concerns about the occasion getting the better of us.

As it turns out, I needn’t have worried.

The Reds put on a sublime performance in front of a near sellout crowd at Suncorp, with Will Genia and Quade Cooper both in career best form (ignoring Cooper’s spot-kicking for a minute).  An intercept try from Rocket Rod Davies put the Reds in front inside the first fifteen minutes and they didn’t look back from there.  Cooper helped set up one of the tries of the season when he danced down the touchline, fending off Lachie Munro and wrong footing the Blues backline before offloading to Ben Tapuai for the second try of the night.  He then proceeded to miss about 5 million kicks at goal before finally converting one.  The Blues scored a cheeky try right on half time to end the first half 15-7 in favour of the Reds.

In the second half, the Reds pulled away from the Blues in emphatic style.  In the battle of the forwards, they were aided immensely by the return of Beau Robinson and they continued their incisive backplay which ultimately lead to two more tries and a hattrick for Rocket Rod.

Previous: Youtube Friday: Brave – The Most Scottish Pixar Movie
Next: Lord of the Rings: Extended Edition on Blu Ray