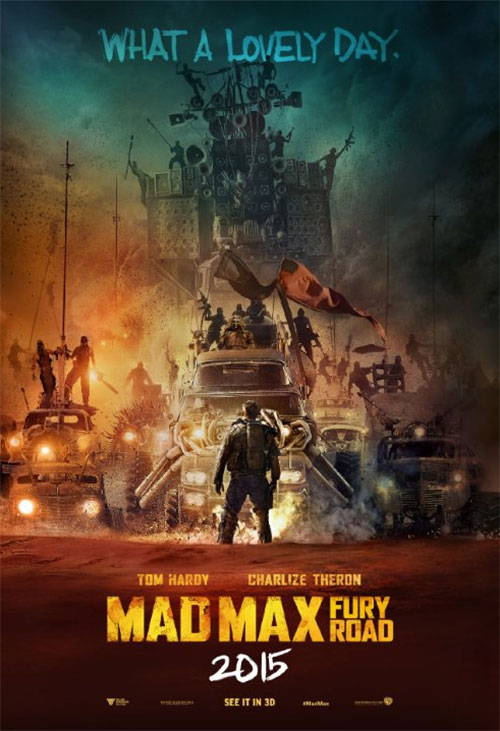 Mad Max: Fury Road is a mind-bending and uncompromising new instalment in the post apocalyptic Mad Max series with veteran director George Miller returning to the helm thirty years after the last chapter Beyond Thunderdome.

It’s extraordinary to think that at the ripe old age of seventy, Miller has found it in him to create something so strikingly original and visionary.  Fury Road is a film that benefits from every last drop of modern special effects technology when showcasing its wild, bombastic chase sequences but the construction of those scenes, the ‘show don’t tell’ philosophy and wonderful characterization behind its oddball cast are all techniques honed by an ‘old guard’ director who still has a thing or two to teach the younger generation.

When I think of most of the other major action films I’ve seen this year, they’ve felt by-the-numbers, designed by committee and very safe.  By comparison, Fury Road exists in a gleefully bizarre and otherworldly universe.  There wasn’t a single scene in the film that felt it existed to placate an overbearing producer or please a test audience.  It is a film that is crammed with quirky observational details about the world these people inhabit and it trusts that the audience will keep up and soak it all in.

A news story that broke just prior to the film’s release about disgruntled Mens Rights Activists bemoaning the film as a work of ‘feminist propaganda’ spoils one of Miller’s greatest chances that he took with the script.  The film has a new Max – ably played by Tom Hardy – but he isn’t really the centrepiece of the story.  Instead that role belongs to Charlize Theron in her performance as the tenacious, ass-kicking Imperator Furiosa.  The character is destined to become a classic, a 21st century spiritual successor to Sigourney Weaver’s Ripley. 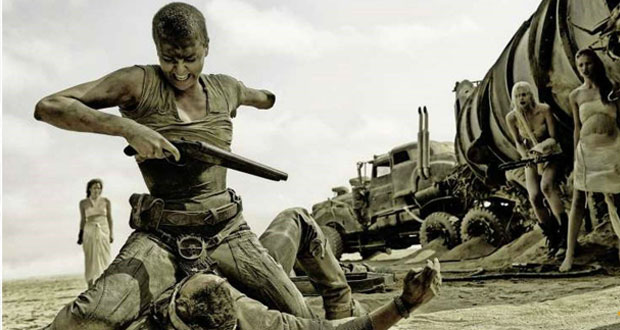 “My name is Max. My world is reduced to a single instinct: Survive. As the world fell it was hard to know who was more crazy. Me… Or everyone else.”

The film begins with a brief narration from Max (Tom Hardy) introducing us to the desert wasteland before he is captured by soldiers called Warboys who serve the imperial ruler Immortan Joe.  Max has an iron mask clamped over his face and he is ignominiously used a hood ornament and live blood bag for Nux (Nicholas Hoult), a Warboy who is slowly succumbing to radiation poisoning.

Immortan Joe rules over the Citadel – a desperate and impoverished society that perform backbreaking labour (think of the machines in Fritz Lang’s Metropolis) in exchange for tantalizingly brief access to clean drinking water.

The action kicks off in earnest when a convoy that Immortan Joe sends out to Gas Town suddenly takes an unexpected detour.  We learn that the driver of the war rig, Imperator Furiosa (Charlize Theron), has secretly taken the First Wives – five sexual slaves that Joe kept in captivity – as her cargo and she has made a break for freedom.  She heads East, hoping to find The Green Place, a sanctuary from the harsh terrain and out of Immortan Joe’s grasp.  To get there she will have to travel through perilous terrain and outrun Immortan Joe and his goons – who are armed to the teeth with guns, spears, explosives, drummers and a guy in a red jumpsuit shredding an electric guitar.

The action in Mad Max: Fury Road comes in thick and fast.  The film has a glorious kinect energy, with Furiosa’s war rig tearing across the desert at a break-neck pace, smashing, bouncing and bulldozing over anything in its path.  Miller shows he has a canny eye for shooting vehicular carnage.  Fury Road has dozens of explosions, crashes and minions getting squished but it never feels repetitive or confusing.  Miller does an excellent job setting the stakes and giving the audience a clear sense of the landscape and what is happening.  The cherry on top is the wonderfully creative window dressing.  The vehicles in Fury Road are rusty shitboxes that are covered in spears and are highly explosive.  The bit-part villains are a terrific pantomime gallery of weirdos – there’s a blind judge firing machine guns, a roided up wrestler who has a child’s mind and a big fatso called The People Eater.

The film’s onslaught of action would count for naught if we weren’t invested in the characters and Fury Road benefits immensely from the performances of Hardy, Theron and Hoult, all of whom probably have a page of dialogue between them and largely rely on their physical performances to set the scene, picking the right times to show grit, determination, vulnerability and compassion.  I’ve always admired Hardy and Theron and both deliver superb performances in Fury Road.  Hoult and his baby blue eyes looked familiar to me but I couldn’t place him.  Turns out he’s the little kid from About A Boy.

Special mention must be made of Fury Road’s excellent soundtrack which compliments the on-screen carnage beautifully with some heart-rending orchestral numbers produced by Junkie XL.  It’s appropriately loud, grinding and elevates the tension in some of the scenes to breathtaking levels (quite literally).

What else is there to say?  Fury Road is unexpectedly great and destined to become a cult classic.  It’s so self assured and unrelenting in its own bizarre world that I’m not entirely sure how much of a mainstream audience it will find.  But those who give the film a chance are in for a treat.  Fury Road is a labour of love and a call to arms from George Miller to other action movie directors out there.  Let’s see if any of them can top that.

Max and Furiosa are on the run in a desert wasteland from the treacherous warlord Immortan Joe.

Summary : Fury Road is an instant classic, a wild action ride for the ages.