TV Show Round Up: Q&A, Survivor: Redemption Island and America’s Most Hated Family In Crisis

Anyone who’s kept up with The FAT Website over the years will know that one of my favourite forms of television entertainment is politics.  Modern day politics is all about sound bytes, spectacle, name-calling and muck raking.  Whether its Silvio Burlusconi having bunga bunga parties, Donald Trump running for the White House or Muammar Gaddafi giving a speech under a brolly, international politics rarely fails to entertain me.  Believe me when I say the 2012 American Presidential election will be the best show on tv next year.

Occasionally, I also like to see a bit of substance to go along with the japery.  In that sense, we are fortunate enough in Australia to have a rather excellent television show called Q&A on the ABC where there is some meaningful and substantive discourse.  The show has a panel format where each week different politicians and pundits take questions via the studio audience, Twitter, SMS and video submissions.  I appreciate the show’s moderation by host Tony Jones who ensures that panelists get to have their say without interuption and he is quick to pull them up if they don’t answer the question.  That said, the show has definitely had its share of spectacle and gotcha moments too.

During a special episode with John Howard last year, he (a) had a shoe thrown at him by an Iraqi War protester and (b) took a surprise video question from David Hicks, an Australian who fought with the Taliban and did time in Guantanamo Bay.  The unannounced nature of the Hicks video was the political equivalent of Jerry Springer bringing out a surprise guest to air some dirty laundry.  It was great television.

Q&A then followed that up a few weeks later with a special episode with current prime minister Julia Gillard.  Once again they came up with a surprise video question, this time from WikiLeaks creator Julian Assange who accused her of passing on private information about Australian citizens to the Americans.

This week, we had another headline making episode of Q&A. It was a regular episode with five panelists, one of whom was former Prime Minister Kevin Rudd.  Rudd was asked by the audience about whether he regretted his decision to scrap the Emissions Trading Scheme, an initiative he pushed heavily for during the Election, famously referring to it as ‘the great moral challenge of our generation.’

To everyone’s surprise, Rudd answered the man’s question by saying that he did indeed regret the decision.  It is a rare thing to see a politician admit to a mistake.  Rudd then pulled the curtain back on the infighting within the Labor party during the middle of 2010, basically insinuating that the current Prime Minister and her colleagues wanted to scrap the ETS altogether.  It was a surprising level of candor followed up by what appeared to be the country’s incumbent foreign minister taking a big dump on his own party and the leader who ousted him.  Perhaps embarassing her and the party nationally was a small measure of revenge for how he was given the boot by his own party last year.  There are now rumours swirling once again that Rudd intends to try and depose Julia Gillard and return to power at the next election.  I tell ya, you couldn’t make this stuff up and have it be any more melodramatic. 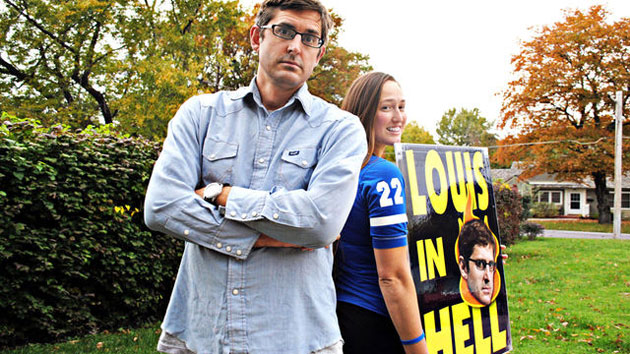 Five years ago, BBC documentary maker Louis Theroux spent time with the infamous Phelps family who belong to the Westboro Baptist Church and gained international noteriety for picketing the funerals of dead soldiers to complain about homosexuals in America (I still don’t really understand the link).  The deranged family has a fantatical obsession trolling the lives of the weak and vulnerable with their bizarre fixation on gay people.  As ever, Theroux applied his trademark style, appearing meek and soft spoken, allowing for the Phelps family members to espouse their deplorable vitriol and he somehow found the self restraint to not let their conversations turn into a shouting match.  Easily the film’s most interesting segments were with the younger Phelps children who are brainwashed into this family’s hardline beliefs.  With even the gentlest line of questioning about whether they miss having a more normal life, Theroux was clearly able to get under the skin of two of the Phelp’s daughters who you suspected may have supressed wishes to leave the church.  We were left wondering whether they would eventually grow up and escape from the family.

Fast forward five years and we have our answer.  There has now been a flood of members leaving the Church behind, even by the church’s own admission.  Some of the girls from the original documentary have left.  Others have not.  In fact the remaining members have become even more fanatical, if such a thing could be possible.

Watching Louis spend time with the Phelps once more, I finished watching the documentary with a measure of satisfaction.  It seemed clear to me that the church was in a significant decline.  While its a shame to see that not all of the younger Phelps kids have left, it was also heartening to see the leaders of the church, Fred Phelps and his daughter Shirley, simply becoming older, decrepit and more senile.  Once they are gone, its pretty easy to imagine the church and its hateful rhetoric dying with them.

We are at the midway point of this current season of Survivor and it has been excellent thus far.  There is always a measure of luck involved with the show in terms of whether they have got the casting right and whether the game unfolds in a fashion where the most entertaining players remain in the game.  While it was unexpected to see Survivor kingpin Russel Hantz get booted from the game so early on, it hasn’t really mattered because the show has offered plenty of drama and colourful characters in his absense.  Survivor veteran Boston Rob has been terrific to watch as he commands the loyalty of an entire tribe of starstruck inexperienced players.  Alleged federal agent Phillip has been a revelation as the crazy-but-lovable contestant that rivals the legendary Coach for his bizarre diatribes about the bushido code and his longingness to fit in with the tribe.

Best of all, for a season that introduced an island about second chances and redemption, it worked out pretty well that a devout Christian by the name of Matt ended up being a force on the island winning six consecutive sudden death challenges to stay in the game.  It’s always interesting to see how well players in Survivor can play the game if they try to adhere to a strong moral code and so it was with Matt who survived Redemption Island and returned to the game with the opportunity to make a significant powerplay by turning his back on his teammates who voted him out and siding with the rival tribe.  However, he was conflicted because he felt that betraying his own tribe would not be the Christian thing to do. I look forward to seeing what happens.

I’m rooting for crazy ol’ Phillip to win but realistically, I’d be happy with Boston Rob, Andrea or Grant to take home the million dollars based on their social game, ridiculous hotness and performance at challenges respectively.