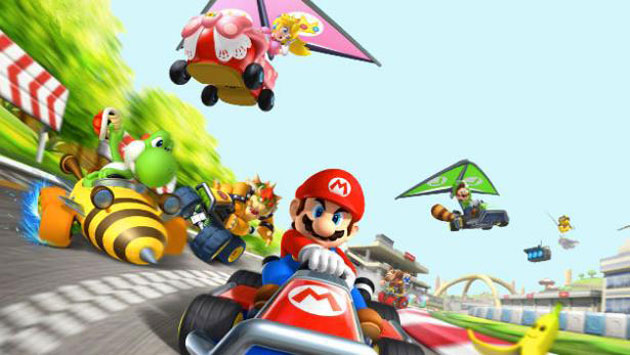 When playing Mario Kart 7, I thought of something that film critic Mark Kermode mentioned in his review of the fourth Twilight movie.  He said what pleased him most about the series as a whole was seeing something so weird and unconventional hit the stratosphere in terms of popularity.  It’s easy to sneer at the Twilight franchise and its fanbase but there’s no denying that it gets pretty bonkers towards its conclusion.  The fourth film finishes with a baby eating its way out of its mother.  That is some serious David Cronenberg-esque levels of weirdness and yet somehow it has become one of the most popular series of books and films in the past decade amongst teenage girls.  Thats kinda neat.  Thats not something a focus group would tell you they want.

In the same vein, consider the Mario Kart series which is one of video gaming’s most venerable and consistently popular franchises.  There’s no denying that in the seventh iteration Nintendo is playing it safe and tweaking an already well honed formula.  But when I was playing the game today and sinking my twentieth hour into it, the main thought in my head was how weird and wonderful the world of Mario Kart is.  I was racing as Donkey Kong in a bath tub with souped up wheels across a rainbow road in space, frantically chasing down a Metal Mario who is actually being controlled by a woman in Germany.  It’s both baffling when considered in isolation and completely normal when in the context of the Mario universe.  And we’ve become acustomed to it.  This is the world that Shigeru Miyamoto created and somehow found a global audience in the millions who bought into this vision.  And a fan base that is close to 50% women.  I think thats kinda neat too.

While I didn’t really warm to the Nintendo Wii version of Mario Kart (I felt it pandered to beginners a little too much), I was a huge fan of the DS iteration.  And Mario Kart 7 offers a very similar level of polish and balance to that game.  Newbies who find themselves at the back of the pack will still be granted a Bullet Bill power up, an invincibility star or the all-conquering blue shell to turn the race on its head but there is still plenty of reward and advantage to the more seasoned player with the implementation of power sliding and shortcuts.  It’s a tricky balance thats hard to fully articulate but I felt Nintendo got it right with this game.  You’ll occasionally have a win snatched away near the finish line due to an untimely turtle shell strike but if you’re good enough, you’re just as likely to be able to use a tanooki power up to counter it.

As with the recent Mario Karts, the game offers a selection of classic tracks from the past games as well as some entirely new ones.  The new tracks are excellent.  It seems Nintendo have used ‘3D’ as a source of inspiration when designing the new levels.  The introduction of both air gliding and underwater navigation to the karts gives the tracks a much more dynamic range of movement.  Plenty of levels snake up and down vertically and its not uncommon to find a track that offers both options at a fork in the road.

The online community, much like the past two Mario Kart games is robust and well populated.  It’s a piece of cake to find other players around the world to play against.  I love the presentation of the game which shows the country of origin of the players in the race.  There’s a real sense of pride to be had when winning a race online against seven competitors that you can see are from all around the globe.  The 3DS version is the most feature-rich online version of the game to date, offering a new community mode as well as improved stat tracking and the use of spot-pass to give players new lap times to beat and challenges to master.  There’s plenty here to keep you coming back once you’ve finished the single player mode and unlocked all the hidden characters and the mirror mode.

If you’re a fan of Mario Kart, this latest version won’t let you down.  Its an evolution, not a revolution, but few games exhibit such a finely tuned understanding of what makes their game successful while still being able to tinker and refine it so that each version still has something new to offer.

My only beef with the game is that my go-to guy from the DS version, Dry Bones, got bumped off the player roster!  I’m happy to see Metal Mario in there and I guess you can make the case for Lakitu but did we really need to keep Daisy in the game if we’re ditching the coolest, baddest skeletal turtle in the Mushroom Kingdom?  She’s practically the same thing as Princess Peach!  I guess you can’t win them all.  Otherwise, this game is nearly perfect and the best version of Mario Kart yet.

Summary : Great graphics, great track selection, questionable roster. Overall, this is one of the better Mario Kart adaptations though.