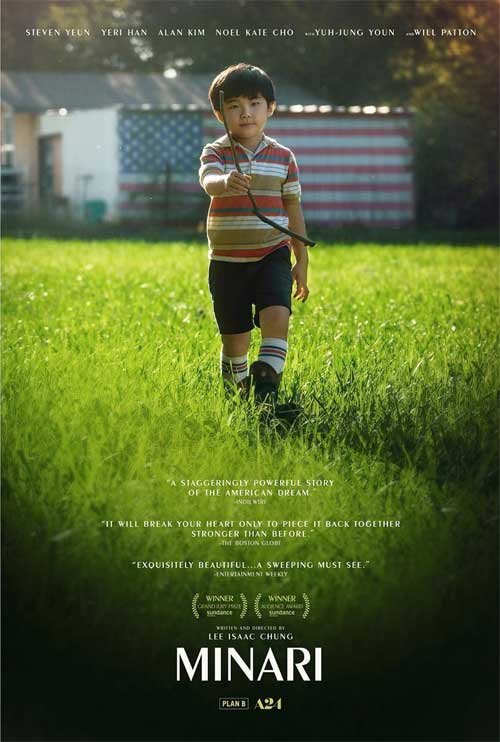 Minari is a semi-autobiographical film from Lee Isaac Chung about the Korean-American Yi family who migrate from California to Arkansas in the Eighties to start a new life.

Parents Jacob and Monica take on work sexing chickens a local hatchery but Jacob’s big plan to improve their lives is to start and maintain his own farm growing vegetables.  Monica is sceptical that farming will work and wishes they could return to California.  This becomes a point of considerable strain in the marriage.

Meanwhile, their children David – who suffers from a heart condition – and Anne, struggle to form their own identity in rural America where they are viewed as outsiders by the locals but the children also don’t have particularly well developed ties to their Korean heritage either.

When a late night argument about the farm blows up between Jacob and Monica, they agree to fly over Monica’s mother Soon-ja, to help raise the children.  Her traditional Korean values and unconventional behavior that doesn’t conform with what David expects American grandmothers to be like initially causes friction in the household.  Soon however, her eccentricity and warmth charms the kids (and I suspect the viewer) and she becomes an integral part of the Yi clan. 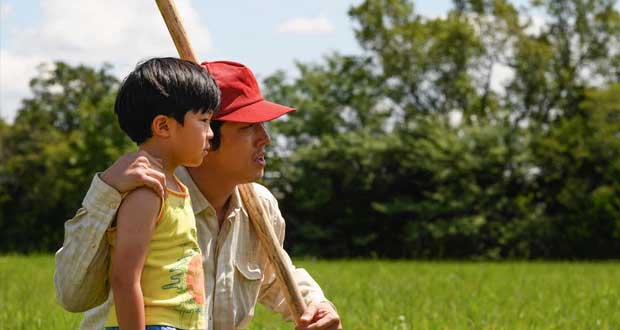 Minari is part of a small but welcome recent wave of Asian-American cinema that includes the likes of The Farewell, Searching and Crazy Rich Asians.  It’s great to see actors such as John Cho, Akwafina and Steve Yeun, who’ve had secondary roles in Hollywood productions for years, have a chance to shine in these recent films.

Minari is a finely crafted Slice of Life film about making a new home for yourself.  The writing and sense of place has a real authenticity to it that resonated with me.  After all, I was David’s age when I was an Asian kid who moved to New Zealand and found myself somewhere totally new and unfamiliar too.  The scene in the church and Sunday school particularly hit home for me.  I remember similar experiences to David and Anne who are asked some rather blunt and clumsily worded questions from the local white kids that are borderline offensive (“why is your face so flat?”) but its actually genuine inquisitiveness and curiousity.

Minari exists with two lenses of the Yi’s new world.  From the eyes of David, he gradually has a chance to flourish in the film.  Although he initially clashes with his grandmother (“you’re supposed to bake cookies and not use bad language!”), over time he comes to embrace her company and they bonded over playing card games.  David also successfully makes a friend with a kid from church and is invite for a sleep-over.  You can see how he begins to adapt and thrive in his new surroundings.

For the parents, it’s very different.  Jacob struggles with farming.  When he first arrives, he turns away a local water diviner and trusts his own instincts to find water to grow the crops.  But his elation at finding a spring of water is short-lived when it runs dry and he is alarmed when one of his only business deals to sell crops in Dallas collapses.  He is supported by the long-suffering Monica who tries to make the best of the situation but is concerned with both David’s health and the long term viability of staying in Arkansas. 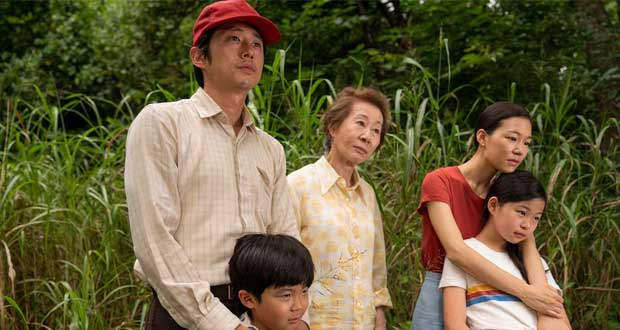 Minari is a simple and effectively told yarn that is elevated by the performances from the cast which are universally excellent.  A lot of the film’s trailer and marketing promotion smartly identifies that the audience will likely latch onto the dynamic between David and Soon-ja which is both entertaining and heart warming.  I also found over the course of the film that Han Ye-ri became a standout for me as Monica.  Steve Yeun’s character begins the film with a sense of wide-eyed optimism but he is far from a “model migrant” and gradually his desperation to provide for his family via the farm leads to him making some questionable decisions and skews his priorities.  There’s a scene shortly after a trip to visit a doctor in Oklahoma City between the parents that is gruelling and heart-breaking to watch unfold as Monica’s patience with Jacob reaches its end.

For a film about migration and seeking greener pastures, Minari is unerringly clear-eyed about the hardships and suffering that often comes with it.  Although set nearly forty years and in a very particular part of the world, the experience of Yi’s still rings true and feels universal for many families today.  What a remarkable and accomplished film Lee Isaac Chung has made.

A Korean family starts a farm in 1980s Arkansas.

Summary : A smartly made and heartfelt film about migration and what it takes to find a new home.