Just over a year and bit ago at the end of 2007, we planned a whirlwind trip to Singapore, Cambodia, Thailand and Hong Kong.A couple of those destinations was to meet up with friends and family. I had never been to Cambodia before and it the part of the trip I was most looking forward to. I wasn’t disapointed, it was an amazing country. There was something about it that reminded me of Brunei in the old days when we were still little kids.

We spent a few days in Siem Reap to look at the temples and ruins around Angkor Wat. We stayed at an eco friendly hotel called La Noria which trained blind masseuses and supported a local children’s charity. It also had an little pool in the courtyard surrounded by those plants I used to play with at ISB, the yellow polleny things. I think I took about a thousand pictures while we were there. We spent one night in Phnom Penh, so I didnt really get to see much of the city, although after being in sleepy Siem Reap for so long it was weird to be harrassed by tuk tuk touts and motorbikes everywhere we went.

We stayed at a fancy hotel that night, as a treat for ourselves. It was quite funny seeing the concierge’s face as we rocked up with our backpacks, sweaty and dirty. Cambodia is so unbelievably cheap, staying at boutique hotel cost no more than £25 for the night. Unlike Siem Reap, there was a plaque outside the hotel gates that had the words “No Sex Tourists Allowed” inscribed. That was quite nasty.

I took this picture while we were looking around Angkor Wat. For my birthday last year, Rob reworked the colours and got it blown up onto a canvas which hangs in our living room. 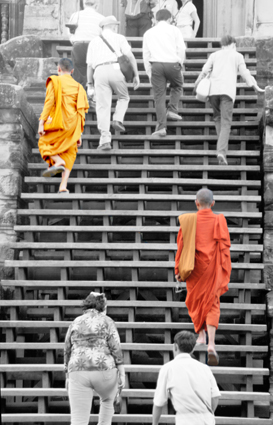 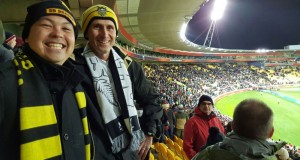