When it comes to politicans and their policies, does it matter whether they genuinely believe in them?  With Prime Minister Julia Gillard it seems pretty clear that a significant proportion of her policies exist specifically because they will increase the likelihood of her re-election and do not stem from any personal feeling one way or another.  How else to explain her backing of Kevin Rudd’s policies when she served in his cabinet only to then turn around and embark in a wholy different direction when she succeeded him (see: mining tax, immigration policy etc).

On the other hand is it better to have a leader who doesn’t impose their own beliefs on the country?  Someone who is open to the idea of changing their approach when they realise what they have tried hasn’t worked?

One thing is for certain: Opposition Leader Tony Abbott is that rare politician where What You See Is What You Get.  Honest to a fault.  In Australian terms, fair dinkum. 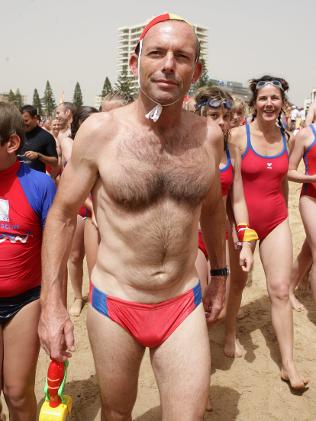 In some ways he reminds me of the gormless government minister Simon Foster from Armando Iannucci’s In The Loop.  I thought in this post-Sarah Palin political landscape, politicans in high profile positions would have 24 hour minders, much in the same way that pop stars do, to stop them from having a brain explosion and saying things like ‘don’t believe everything I say‘ (Abbott, May 2010).

Tony Abbott is often presented as a figure of ridicule by his opponents for his conservative Christian values.  While Australian is predominantly a Christian nation so this isn’t a political handicap in of itself, Abbott still has a habit of phrasing things that makes him come across like one of those characters out of Pleasantville.  Sure he’s that Christian guy but you still can’t quite believe it when he casually implies that housework and ironing is women’s work, or that he rather bluntly describes homosexuals as making him feel uncomfortable or that he believes a women’s virginity is a ‘gift’ to be given to a lucky man.  These are the phrases and media soundbytes of a man who is giving his honest unvarnished opinion and is apparently unphased by how they make him come across.

I guess we should applaud the honesty but in actuality, I find most of it doesn’t improve my opinion of Tony Abbott at all.  I’d rather not have a guy with archaic social values as a Prime Minister although its nice to know he doesn’t try and hide his beliefs.  Its great that he’s open enough to admit that he wouldn’t really go to any great lengths to prevent Japanese whaling on Australia’s coastline because he doesn’t want to damage their economic ties but it doesn’t really change the fact that that is pretty lousy reasoning.  And yes, while it shows a perplexing level of frankness to say ‘don’t believe everything I say’ because he occassionally gets carried away and makes promises he can’t deliver on, that doesn’t change the fact that its a piss poor politician who would put themselves in that position.

Previous: Boat People
Next: Not long to go now