I think this is the first time I’ve written about American politics since Obama got elected two years ago.  It was a highly optimistic time back then and we were all hyped up on that, ahem, ‘hopey changey’ rhetoric after eight long years of the Bush Administration.  I’m not entirely sure what we were expecting these past two years but clearly there’s been some disappointment.  The public option healthcare plan didn’t materialize, the troop deployment in Afghanistan got expanded, the administration is currently fighting to overturn a court ruling to get rid of Don’t Ask, Don’t Tell and the American economy is still in the toilet (yesterday, the Australian dollar had parity with the greenback for the first time ever).

The Republicans responded to their thrashing at the polls in Presidential Elections of ’08 by standing together as a united front, blocking any bills that Obama and the Democrats have tried to pass.  In return, Obama has continually tried to compromise and work with the Republicans and with the midterm elections looming, the polls suggest that all he has succeeded in doing is alienating his own base while winning none of the conversative vote.

The GOP’s newfound resurgence didn’t happen overnight and the party required a serious transformation after the collapse in support for the Bush Administration.  What I don’t think many people would have predicted is that one of the key power players in this new movement is Sarah Palin, once considered the political liability that cemented John McCain’s defeat in the 2008 election.

Although not the founder of the Tea Party, Palin has co-opted the movement and travelled the country, endorsing candidates across dozens of States, and with a reasonable trackrecord of converting them into election-winners.  Perhaps none more surprising than Christine O’Donnell who defeated veteran Republican candidate Mike Castle.  Capitalizing on an extraordinary level of voter apathy, O’Donnell won her nomination with just 3% of Delaware’s population.  O’Donnell however, comes with a lot of baggage.  Accusations are rife of campaign fraud and she has a rather colourful background in the public eye having appeared on Bill Maher’s Politically Incorrect show and gone on record as saying she used to practise witchcraft and believes masturbation is a form of adultery. 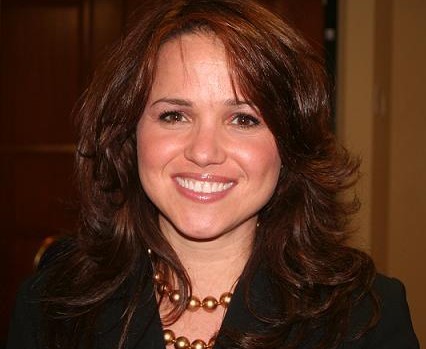 Christine O'Donnell - "I'm not a witch"

When O’Donnell won her Republican nomination, former Bush advisor Karl Rove called her ‘nutty’.  Palin then publically called out Rove and told him to fall in line to which he relented and gave O’Donnell an endorsement the very next day.  This to me cemented Palin’s newfound political power.  She had the ascension over Karl Rove, formerly one of the most powerful figures in the conservative movement.

O’Donnell has since become one of the most widely recognizable Tea Party candidates in the media for good reason.  She is attractive, has batshit insane beliefs and is a big proponent of the party’s policies which are critical of the Obama Administration’s bailout and stimulus packages and is in favour of smaller government.  For frame of reference, lets have a look at how the government currently spends the American tax payer dollar: 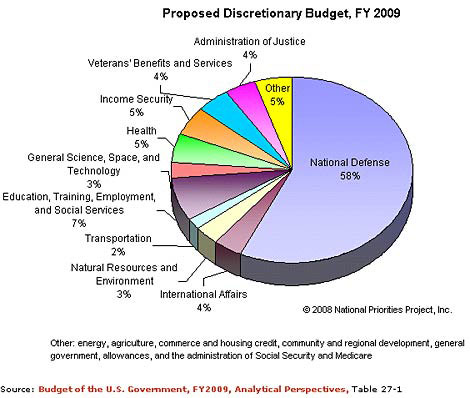 If you think someone from the Tea Party who supports ‘small government’ is in favour of reducing Defence spending, you’d be wrong.  None of them want to touch that.  Instead candidates are talking about repealing Obama’s healthcare bill, eliminating the department of Education, the Environmental Protection Agency and Social Security.  If the Tea Party are successful in attaining any meaningful position of power in American politics, its safe to say the country will likely undergo one of the most radical changes to national policy and infrastructure over the past hundred years.

I began writing this particular post to lead into two other examinations of the Tea Party that do a better job at portraying them than I ever could.  Firstly, this excellent article written by Matt Taibbi which explores the origins of the party and rather bluntly assesses the strange dichotomy between the Tea Party supporters who want to get rid of social welfare but are themselves reliant upon it.

“I’m anti-spending and anti-government,” crows David, as scooter-bound Janice looks on. “The welfare state is out of control.”

“Me?” he says proudly. “Oh, I’m a property appraiser. Have been my whole life.”

I frown. “Are either of you on Medicare?”

Silence: Then Janice, a nice enough woman, it seems, slowly raises her hand, offering a faint smile, as if to say, You got me!

“Let me get this straight,” I say to David. “You’ve been picking up a check from the government for decades, as a tax assessor, and your wife is on Medicare. How can you complain about the welfare state?”

“Well,” he says, “there’s a lot of people on welfare who don’t deserve it. Too many people are living off the government.”

“But,” I protest, “you live off the government. And have been your whole life!”

“Yeah,” he says, “but I don’t make very much.” Vast forests have already been sacrificed to the public debate about the Tea Party: what it is, what it means, where it’s going. But after lengthy study of the phenomenon, I’ve concluded that the whole miserable narrative boils down to one stark fact: They’re full of shit. All of them.

Secondly, this video clip is an excellent series of vox pop interviews conducted during Glen Beck’s rally on the anniversary of Martin Luther King’s I Have A Dream speech.  I think the interviewer does an excellent job of raising some pertinent questions and letting the candidates speak for themselves.  A lot of them display an extraordinary lack of critical thinking.  One woman complains that Barrack Obama has ‘done a lot’ to drive a racial divide in America.  When asked to name an example, she is unable to think of one.

Which brings us back to the type of candidate she would typically be supporting:  Christine O’Donnell.  When O’Donnell went onto a political debate hosted by CNN, she was asked to name a decision by the supreme court that she disagreed with, O’Donnell replied that she knew that she definitely disagreed with some, she simply couldn’t name any.  “Check tomorrow on my website” was her final word on the matter.  I think America has reached an extraordinary position in their country’s political discourse when even the candidates themselves are spouting political talking points with apparently no understanding as to the meaning or context behind them.

As an observer watching this coverage from abroad, it is a fascinating experience.  Take the recent political debate between Tea Party favourite son Rand Paul and Democratic candidate Jack Conway which turned into a mud-slinging contest during which Conway came out with this verbal attack:

“Why did Rand Paul once tie up a woman, tell her to bow down before a false idol, and say his god was ‘Aqua Buddha?'”

Despite my misgivings about the recent Australian election, I don’t think that is something I would ever hear over here in a million years.  There is nothing quite as surreal, comical, saddening and potentially world changing as American politics.  Its the best reality show going on tv today.

Previous: Enslaved: Odyssey to the West
Next: Aria Brisbane