The premiere world footballing competition, the AFC Asian Cup begins this weekend.  The competition features sixteen of Asia’s best footballing nations and is held every four years.  The defending champions of the competition are Iraq who beat Saudi Arabia in the final of the 2007 competition.

Australia are perennial favourites to win the tournament but they did such a shit job of it in 2007, people are wondering if its some sort of thing like the All Blacks at the World Cup.

It is the fifteenth time the tournament has been held and this time it is eminating from the fine country of Qatar. 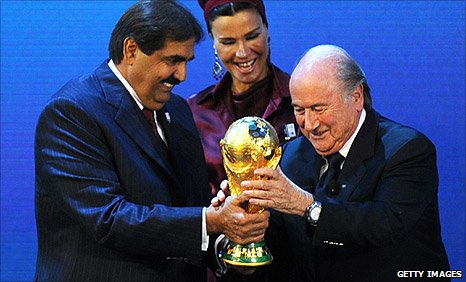 Thats right.  Before Arab Paul Bearer bought the right to host the World Cup 2022, he was also throwing money around the AFC to secure hosting rights to the Asian Cup.  The competition is normally held in July but because it’s too f’ing hot, we’re getting it in January instead.

Lets have a look at the groups.

This group is actually already under way with hosts Qatar having played Uzbekistan last night.  They were going into the game as favourites but ended up losing 2-0.  A crowd of 38,000 supporters were on hand to support Qatar but once they started losing, they started leaving the stadium in their thousands and by full time the stadium looked embarassingly empty.  Have I mentioned just how shitty a decision it is to have this nation host a World Cup?

Uzbekistan are the seeded team to go through this group.  China and Kuwait both have lower ranks which seems a little bit suspicious since China has a billion people and they all like Manchester United or Liverpool so surely they can put together a better squad than the Uzbekis?

Before the tournament, I desperately wanted Qatar to qualify through to the tournament stage so they could meet Australia but given the result of the opening game, I’ll settle for them remaining goalless throughout the rest of the Group stage and being eliminated without a point to their name.

MY PICKS TO ADVANCE: Uzbekistan and China

This is a pretty tough group with Saudi Arabia being the top seeded team who came in as Runners Up for the 2007 instalment of the Asian Cup.  They also have a palm tree for their logo.

Of course, I’m backing my boys in blue Japan to crush the opposition and to return glorious honour to the Empire.  It’s a bit tricky to pick who’ll top the group but I don’t think anyone is expecting much from Syria and although Jordan is renowned for her ball handling expertise, she isn’t expected to trouble the rest of this group.

MY PICKS TO ADVANCE: Saudi Arabia and Japan

“Hang on,” I hear you say, “since when have Australia been a part of Asia?”

Well if they weren’t let into the AFC then we’d have to have our own Confederation tournament with the Faroe Islands, Samoa and Wellington Phoenix so thats no fun.

Australia actually has the AFC Asian Player of the Year in their squad in Sasa Ognenovski.  In the AFC, to win the Player of the Year award you have to be able to attend the Award Ceremony.  Since most of the best Asian players are playing club football in Europe, the likes of Tim Cahill and Park Ji-Sung did not get considered for the award.  Ognenovski however, did receive the award since he was injured and had some free time on his hands.  If you can believe it, the AFC might actually be a worse run organisation than FIFA itself.

Like China, India are surprisingly awful for a country that has over 1,000,000,000 people.  Korea normally has a contigent of smoking hot supporters but unfortunately Qatar doesn’t allow women.

Anyway, Australia and Korea are so much better than Bahrain and India its not even funny.

MY PICKS TO ADVANCE: Australia and Korea

Every tournament has its Group of Death but surely there has never been a more fitting title for this rogues gallery of dictators, warlords, army generals and sodomists.  Feel sorry for the two teams that don’t make it past the group stage because they’re getting shot when they fly back home.  What a terrible group.

MY PICKS TO ADVANCE: North Korea and Iran

Australia’s first game of the tournament is against India and will be on at 12am EST on Tuesday, January 11th.  You can expect full reports on their games right here on TFW.

EDIT:  Here’s a highlight video of the opening game between Qatar and Uzbekistan.  The first goal is an absolute screamer.  The second goal is bit of LOLQATAR stuff.

Previous: A-League – Round 25 – Brisbane Roar vs Perth Glory
Next: Tomorrow When the War Began