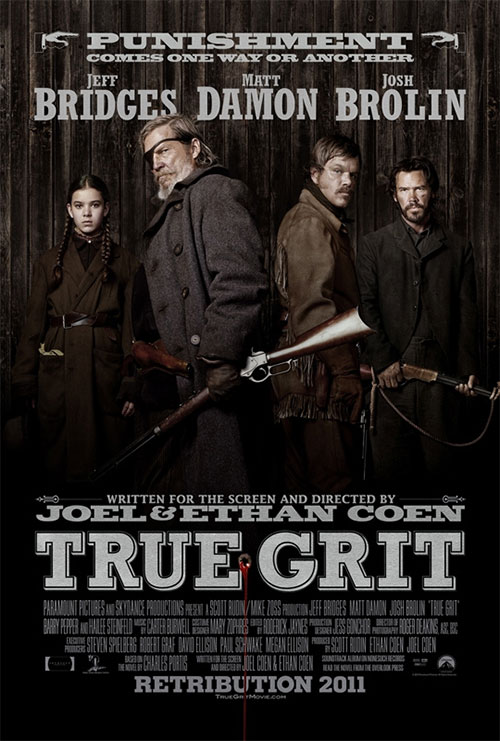 If you can believe it, True Grit is the first Western that the Coen Brothers have made.  Although many films in their extensive oeuvre are set in the American South and are populated by hardened, accented characters with Western sensibilities, its taken the release of this, their 18th film, to go all in.

While I can’t say I’ve seen all that many Westerns, I enjoyed every single minute of True Grit and I loved it enough to want to seek out some other classics in the genre.  It’s that good.  At heart, its a pretty straight-forward revenge film but as is always the way with the Coen Brothers, it is the journey and the characters that give the film its quality.

Mattie Ross, played by Hailee Steinfeld, is a feisty and fast-talking fourteen year old girl who arrives in the town of Fort Smith to finalize the business of her father’s death.  This involves paying the undertaker for the coffin, claiming the ponies he bought shortly before his death and hiring a bounty hunter to track down his killer Tom Chaney.

When Mattie asks the sheriff his opinion of the local marshalls who do bounty work in Fort Smith, he offers up three candidates and assesses their worth: cheap and effective, brutal and unreliable or a well rounded combination of the two.  She opts to track down Rooster Cogburn, the second option.

This opening chapter of the film is exceptionally well crafted.  Not so much for the setup of the plot but for how two scenes, one involving Mattie bartering with a conniving horsetrader and the other involving Rooster being cross-examined in a trial, so effortlessly encapsulate who these people are, what their idiosyncracies are and why we should root for them.  Mattie shows confidence and a mastery of reasoning beyond her years as she befuddles the horsetrader who mistakenly assumes her age makes her an easy mark.  Rooster meanwhile possesses a cocksure swagger and cheekiness as he recalls a recent gunfight and makes a mockery of the lawyer’s questioning. 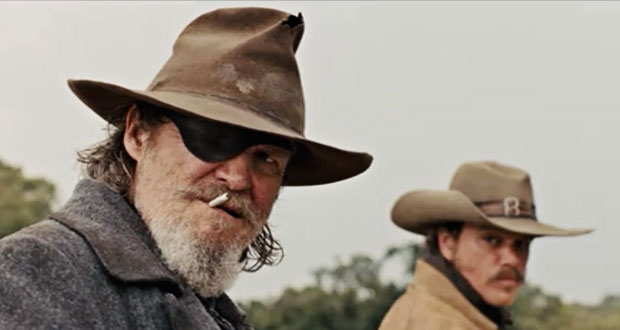 Rooster and Mattie are two very different people cut from the same cloth.  Both are stubborn and used to getting their way.  Which is why the story wisely introduces the character of LaBoeuf, a Texas ranger, who plays the straight man to Rooster and Mattie.  LaBouef is played wonderfully well by Matt Damon.  His exchanges with Mattie and Rooster where he bears the brunt of their putdowns are some of the film’s finer moments.  I absolutely love the dialogue in True Grit.  The characters talk in a well-spoken and mannered vernacular and yet paradoxically most of the dialogue is dedicated to derision and oneupsmanship.

LaBoeuf: You give out very little sugar with your pronouncements. While I sat there watching you, I gave some thought to stealing a kiss… though you are very young, and sick… and unattractive to boot. But now I have a mind to give you five or six good licks with my belt.
Mattie:  One would be as unpleasant as the other.

Of course, once the journey to track down Chaney gets under way, the characters come to know and appreciate one another for their qualities.

Along the way, they also meet some strange and colourful folk.  There is an enourmous bearded journeyman wearing a whole, skinned bear.  There is also a gang of bandits whose members include a man who speaks entirely in animal grunts and noises.  As ever, the Coens have an uncanny knack for casting memorable and esoteric supporting cast.

True Grit has some spectacular gunfights, some tense stand-offs and a truly glorious showdown involving Rooster charging on horseback at four bandits on the open plain.  It doesn’t get much better than a one-eyed Jeff Bridges clenching the reigns of his horse by his teeth while firing a pistol in each hand.  It is probably the most exhilerating scene of any film this year.

Of course, all good things must come to an end and so it does with True Grit.  Mattie finally gets her opportunity to exact vengeance upon Tom Chaney but it comes at a dear cost.  The film ends in a somewhat morose fashion but it is only fitting with the world these characters live in.

True Grit was everything I wanted it to be.  It serves up plenty of humour, action and suspense.  It’s got a great score and Roger Deakin’s cinematography ensures your eyes are always engaged with the beautiful and harsh landscape.  The central cast of Jeff Bridges, Haliee Steinfeld and Matt Damon are top notch.  Josh Brolin works well as the bastard Chaney.  This film does everything right.

A tough U.S. Marshal helps a stubborn teenager track down her father’s murderer.

Summary : It's been a long time coming but the Coen Brother's first take on the Western has been worth the wait. Superior to the John Wayne original with great performances from Bridges, Damon and Steinfeld.

Previous: Asian Cup 2011 Final: Japan vs Australia: I Win
Next: There is a ridiculously large cyclone that is about to hit Queensland in 3…2…1… 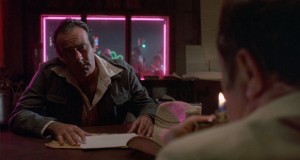