In the Boxing Day M1 Derby clash, the Brisbane Roar marched on with their losing streak, losing 1-0 to Gold Coast United.  The winning goal came via a penalty late in the game when Rocky Visconte was wrongly adjudged to have fouled a Gold Coast player inside the penalty area when in actuality he was about a metre out.  A win for Gold Coast was a fair result however.  They were easily the superior team that created the most chances.  Luck can be a fickle mistress.  During the Roar’s unbeaten streak they certainly had their share of it, particularly in scoring a last minute equalizer against Melbourne Victory despite Roar goal keeper handling the ball outside the penalty area.  Now, during the losing streak, they’ve conceded a goal that curled in off a corner kick, conceded a goal from a goal kick that went straight to the opposition and now this.

I can’t quite explain why but morbidly, I’m kind of enjoying the losing streak.  It creates some interesting drama around the league which the Roar were in danger of running away with at one stage.  They’ve been hailed as champions and strategic masterminds so how can they come back from this?  It’s certainly character building for both the club and its fans.  I’m curious how long we can keep on losing and then what happens when (if?) we bounce back.

The A-League losing streak record is 11 straight games, which is held by the now defunct New Zealand Knights.  The Roar are currently halfway there.  I think we could potentially have an extraordinary piece of pub trivia in the making if the Roar manage to break both the longest undefeated streak *and* the longest losing streak in a single season.  It could certainly be possible.  They played like garbage against the bottom team in the league and never looked like scoring.  In the meantime, virtually every other team in the competition is showing signs of improvement.

It’s an interesting time to be a Brisbane Roar fan. 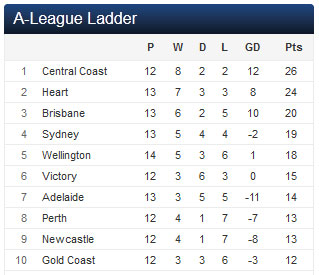