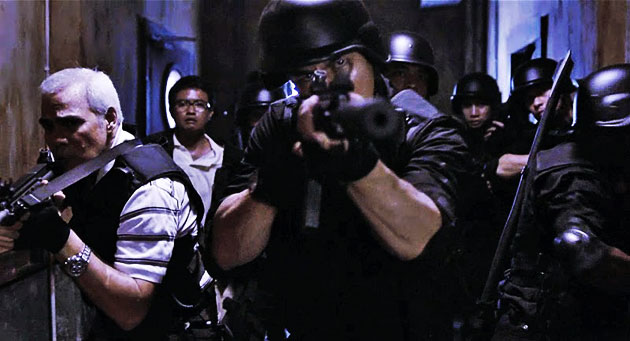 Time flies.  It’s been nearly ten years since Ong-Bak was released in cinemas.  This incredible debut action film starring martial-arts star Tony Jaa turned heads with its bone crunching action scenes that bucked convention at the time for being shot without the use of any computer aided effects. Ong-Bak begins with a short and sweet introduction – a boy completes his martial arts training and is told by his sensei that he must live peacefully and never use his fighting skills unless absolutely necessary.  What follows is roughly 90 minutes of some of the finest ass-kickery ever recorded on film as Jaa absolutely wails on some sorry Thai stuntmen with some painful looking elbow strikes (usually to the face).  It remains one of my favourite action films of all time.

It’s now 2012 and a Welsh-born Indonesian director named Gareth Evans has made The Raid.  It’s apparently his third film but I doubt many people have heard of Evans, let alone seen his earlier work.  It is The Raid that will make his name.

Not unlike Ong-Bak, The Raid is eye catching in part due to its location.  How often is it that you get to see a South East Asian film production?

The film begins by introducing us to a police officer named Rama.  He begins his day by practising his Islamic rituals, the religion of peace.  On this day, he and his SWAT team (are they still called SWAT in Indo?) are preparing to swarm an apartment complex which houses a crime lord named Tama and several hundred residents, most of whom are drug dealers or users.  They are all indebted to Tama for providing a safe house and will fight intruders to protect it.

The SWAT team, lead by Sergeant Jaka, seem to understand that they are on a fool’s errand.  It’s not particularly clear which higher-up in the police force ordered this attack but they get the feeling they are on a one way mission.

After sneaking into the building, the SWAT team make it up several flights of stairs before they are spotted by a young boy.  The boy makes a dash to an alarm trigger which alerts all the residents to their presence.  The crime lord Tama announces over the intercom that there is a police presense in the building and that they must be wiped out with extreme force.

And that is that.  That’s more or less the entire set up.  The last of any coherent dialogue.  After that alarm goes off, its all systems go with some of the most adrenaline-charged, inventive blend of martial arts and gun play that I can recall seeing in the action genre.

The Raid finds beauty and ingenuity in its chaos.  The whole nonstop ballet of bullets and blades seems interconnected and carefully choreographed.  The building itself is practically a character in the film.  The SWAT team and the criminals burst through walls, hack their way through floors and use their environment to cause severe bodily harm to one another in ways I didn’t know were possible.  You will find yourself cheering, gasping and wincing throughout the next 90 minutes.

Director Gareth Evens has crafted this film for a very particular audience.  Roger Ebert, a film critic who I greatly admire, watched this film and came away stunned by the near absense of plot or character development.  He awarded it one star.  For action fans looking for a genre film distilled to its purest essense, this is like mana from heaven.  For Evan’s target audience, there will be no greater moment than the extraordinary showdown between the film’s two protagonists and Mad Dog, Tama’s right hand man.  Mad Dog explains earlier in the film that he finds no joy in killing with a gun and that it is slaying a man by hand-to-hand combat that gives him the jollies.  What follows is one of the most exhaustive, prolonged fight scenes I can ever recall seeing in any film.  It goes back and forth for several minutes and at its conclusion, had the audience in my cinema clapping and cheering.

The Raid reminded me of Ong-Bak because of the geographical location of the film and how a small budget independent film shook up the world of Hollywood action blockbusters.  It is a very simple and straight forward proposition.  Ten minutes of story tops and then 90 minutes of unfettered action.  For those who want it, this is one of the best films of its kind in many, many years.

Tagged with: Gareth Evans The Raid 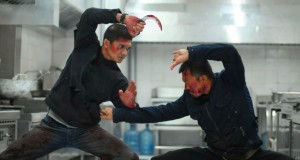