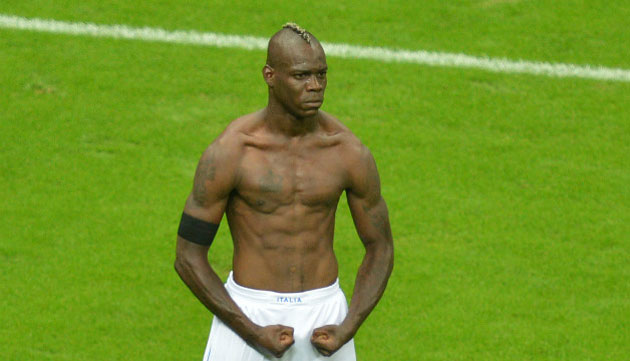 “I don’t celebrate [when I score a goal] because I’m doing my job.  Does a postman celebrate when he delivers the mail?”
– Mario Ballotelli

It couldn’t be scripted any better that Euro 2012, a tournament that brought into sharp focus the ugly side of European football that still struggles with rapant displays of racism, should find its star player in the most unlikely of places – Mario Ballotelli, a black Italian footballer.

Racism has been at the forefront of a tournament that has otherwise produced some quality football, low scores and few upsets.  It was already there in the pre-tournament warm up when players at the Dutch training camp were taunted by monkey noises from the stands.  It was a matter that showed UEFA in less than flattering light when they fined Niklas Benter more money for wearing the logo of an unofficial sponsor than for the Croatian fans when they were penalised for racist chants.  And for Mario Ballotelli, racism has been part and parcel of life in Italy.  When he played for Internazionale at the start of his career, Juventus fans taunted him with a banner that read “a negro cannot be Italian.”  And to put this in context – Juventus aren’t considered to have particularly racist fans.  There are far worse supporters for other clubs in Italy.

I’ve plugged the book on TFW before but Tim Parks’ A Season With Verona offers an excellent insight into how prevalent racism is in Italian football.  It’s so ingrained into the culture that I cannot see it ever disappearing.  There’s a particular attitude in Italy towards minorities, towards refugees and towards women that explains how someone like Silvio Berlusconi, a giant unlikable shitbag, can remain in power for so long.  When he was shown the door, it wasn’t because of the underage prostitutes, it wasn’t his remarks about Barack Obama’s skin tone or calling Angela Murkel an ‘unfuckable lardarse’.  It was because the economy went to shit.  Being racist or misogynistic is a-okay, but don’t screw up our economy.

Which is what makes Mario Ballotelli so damned interesting.  To be honest, he’d be an unusual proposition for Italy even if he was white.  I always think of Italian football as being incredibly conservative yet ruthlessly efficient.  I think of players like Paolo Maldini, Dino Zoff and Alessandro Del Piero.  Reliable players that have an ice cool demeanour.  If they were having a shit day, you wouldn’t know it.

Ballotelli is the opposite.  You can probably tell if he’s going to have a great game or a rubbish one if you looked at his face when he gets off the team bus.  He is hot headed and emotional, clashing with fans, coaches and players alike.  He is everything that I don’t associate with the Italian style of play.

Euro 2012 has been no different for Ballotelli.  He’s scored goals and then yelled at his own team’s bench on the sidelines.  There are players in his own squad that visibily have a problem with him and don’t celebrate goals with him.  But he’s also playing some of the best football of his career and he took his game to another level when he dismantled the mighty Germany with two goals in the first half of the semi final.  The second goal in particular was an unstoppable rocket.

How will Ballotelli go in the final?  Who the hell knows?  I don’t think Super Mario knows.  But it makes for incredible theatre.  In a tournament that was defined by racism, there is no better underdog to cheer for.  Since 2006, I have never cheered the Italian football team against any opposition.  And yet I find myself so drawn to Ballotelli that I cannot help but cheer for him and subsequently cheer for Italy.  I hope he wins.  I hope he scores.  And I hope he can do something to change the way football fans think in Italy.  He’s not the hero that most of them asked for but he might be the one that they deserve.

A Season With Verona