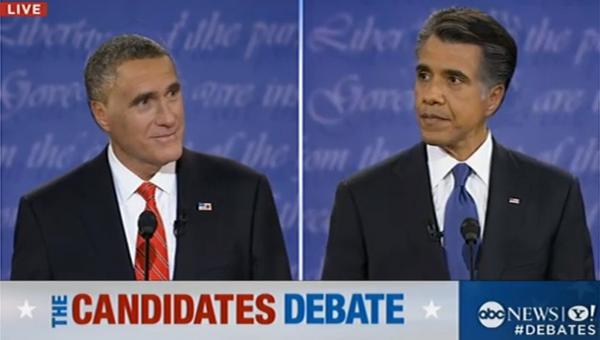 Mitt Romney finally struck a successful blow in his campaign for the presidency on Tuesday night when he was unanimously declared the winner of the first debate against Barack Obama.  The topic of the night was domestic policy, with the economy and healthcare being the two big ticket items up for discussion.  Romney trotted out the same lies that he has throughout his campaign and even brought back some of the classics from the Republican party, like Sarah Palin’s ‘death panels.’

For Obama’s part though, he put in a surprisingly flat performance.  He didn’t clearly articulate his ideas, didn’t call Romney on his bullshit and appeared listless throughout.  It seems unthinkable that he didn’t take Romney to task for his famous ‘I don’t care about the 47%’ quote.  In the end, Romney served up the same questionable talking points and Obama didn’t retort.  Romney was rightfully declared the winner.

Obama has always had a carefully crafted and stage-managed demeanor as president.  No matter what is thrown at him, he remains calm and impassive.  I’ve read that this is partly to stop any characterization of him as an ‘angry negro’ from the far right although if this is true, I think planning your public image around what a group of fundamentalist nut jobs think of you is a fool’s errand.  I think people were looking for some fire from Obama here and they didn’t get it.  Will he change his approach in the two remaining debates?  We shall see.  Will any of this make a difference in polling for Romney?  We won’t have long to find out.

Meanwhile, the GOP and its supporters continue to find new ways to lurch over the deep end.  Prior to the first debate, Romney supporters decided that polls that showed him losing to Obama were biased and unfair.  This week, when the latest employment figures came in and showed America having a shrinking unemployment rate of under 8%, they said those were made up too.  It seems statistics have a liberal bias.

As for Romney himself, he has managed the impossible.  In an election that all sides agree is about the economy first and foremost, Mittens has ‘won’ a presidential debate against one of the supposedly greatest orators in politics by running on a campaign that has no detail.  Sure, Romney is saying he’s going to make it all better but he is offering no detail as to how he’s going to fix anything.  ‘Find out once I’m elected!’  One of the sound bytes offered up from the debate was Romney talking about how he’d make cuts to public broadcasting to help balance the budget.  I think Neil deGrasse Tyson summed this one up best: A month to go.

Previous: Mark of the Ninja
Next: Everybody’s Golf