I’ve always thought that the life and times of Walt Disney would lend themselves well to cinema.  There’s probably a dozen different tales you could tell.  The rags to riches story.  His relationship with the Nine Old Men who brought his creations to life.  The curiousity that a lot of people have about his ties to anti-Semitic groups.

It’s likely that we won’t really see a lot of these stories told.  Not as long as The Walt Disney Company exists as we know it today.  However, Saving Mr Banks does give us a least a little insight into the creative process behind one of his most well known film adaptations.  Saving Mr Banks explores the torrid time that Disney and his creative team had working with the neurotic and controlling author of Mary Poppins, P.L Travers.

Travers, played by Emma Thompson, spends the later years of her life living in a townhouse in London and she is about as far removed from the cheery nature of her most famous creation as one could imagine.  She lives as a hermit, locked away indoors, her lawyer and her maid the closest thing she has to friends.

As her funds begin to run low, she is eventually convinced by her lawyer to hand over the film rights of Mary Poppins to Walt Disney, who we learn has courted her for that signature for the better part of two decades.

Travers relents but only on the condition that she oversee the adaptation and maintain strict creative control.  No Dick Van Dyke.  No animation.  No musical numbers.  Disney and his creative team (which includes Bradley Whitford, Jason Schwartzman and BJ Novak) will have their work cut out for them to convince Travers otherwise.  We realize just how arduous this task will be when during the first run through of the script, Travers begins to obsess on the concept art of her house, insisting that it look just like her own, down to the last brick and tile. 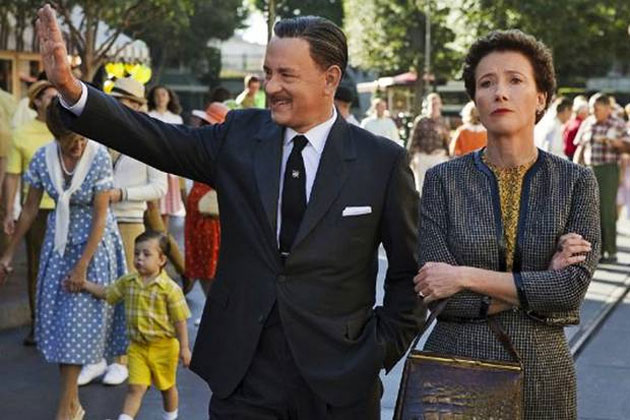 The pre-production process of Mary Poppins is interspersed with scenes from Travers childhood in Maryborough, Australia where she lives with her family.  The patriarch Travers Goff (Colin Farrell) has a wonderful relationship with his daughter but we learn that he is also a deeply flawed man, alcoholic, impulsive and unable to provide a stable environment for his young family.

I really enjoyed Saving Mr Banks a lot.  I have a soft spot for neurotic, obsessive characters like P.L Travers and Emma Thompson does a wonderful job bringing her to life.  Her dour, pessimistic and anti-social demeanour is a hilarious juxtaposition to her cheery, schmaltzy surroundings in Hollywood as everyone from her chauffeur  (Paul Giamatti) to her co-workers to Walt Disney himself find themselves bamboozled by her sharp tongue and short temper.

For a Disney production, I was surprised at how unvarnished the film really is in portraying Walt’s relationship with Travers.  He eventually comes to understand how she became so isolated and mistrusting but this does not exactly unlock a blossoming friendship.  He still doesn’t invite her to the film premiere for fear of her lambasting the final product to the media and you get the sense they probably never spoke again once they parted company and she returns back to England.

Saving Mr Banks is an entertaining and informative glimpse into how Mary Poppins was made.  You learn what a personal piece of work it was for Travers, whose wish-fulfillment in the book derived directly from her relationship with her father.  The end credits of the film reminded me of Argo where we are shown a snippet of a real life audio recording of Travers talking to the production team and we come to realize how close the film was to capturing what Travers was actually like.

Of Mice and Men

Summary : A fascinating tale about the arduous journey adapting a children's classic onto the silver screen.