Inspired by the true story of a 2009 container ship hijacking by Somali pirates, Captain Phillips is a tense and entertaining thriller directed by Paul Greengrass and stars Tom Hanks as the eponymous captain.  It’s a film that both surprises and engages the audience thanks to the time spent exploring and contextualizing the motives of the pirates.

Hanks plays Richard Phillips, an experienced merchant mariner who captains the vessel Maersk Alabama from a port in Oman.  They have not been at sea long when they are intercepted by Abduwali Muse and his band of pirates.  Earlier, we are shown a scene in which Abduwali recruits a handful of hopeful villagers from a destitute coastal town as his crew.

The fashion in which this team is assembled reminded me of a schoolyard pick for a football game.  There’s a cluster of eager volunteers standing around with their arms raised, yelling out their credentials and Abduwali simply points and chooses who he wants in his team.  He ends up putting together a crew that includes a trigger happy gunman, a naive and overwhelmed teenager and a dozen others.

Abduwali and his men commandeer two tiny skiffs (one with an unreliable engine) and it takes them the better part of two days to finally board the Maersk Alabama once they sight it.  This game of cat and mouse is excellently put together by director Paul Greengrass.  I remember during his days making the Bourne films that he developed a fondness for shooting action in that shaky-cam mode that was all the rage in the mid-2000s and it would make it difficult to follow what was happening.  Not so with Captain Phillips.  There is an entertaining game of wits between Phillips and Abduwali as the pirates bear down the the much larger vessel and I thought Greengrass did an excellent job showing the audience how it unfolded. 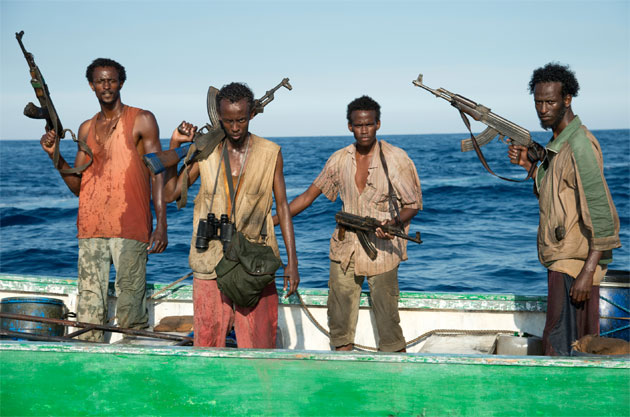 What the film eventually transforms into is a tense hostage standoff between the pirates, who escape the Maersk Alabama with Phillips in tow, and the US navy.  It becomes pretty evident that the pirates are hopelessly mismatched and out of their depth.  They naively ask for a Doctor Evil-esque sum of ransom money which I have no idea how they determined.

At this juncture, the film takes an unexpected turn and delivers an emotional suckerpunch to the audience.  We’re not expected to sympathize with the pirates or believe they are justified in their cause but just like Captain Phillips himself, you begin to wonder what has gone wrong in Somali society to drive these men into such a desperate act.

The ending of the film is comparable to Dog Day Afternoon and Of Mice and Men.  Abduwali’s depressing gullibility as he barters with an American naval negotiator to meet with some ‘village elders’ and be delivered his money was surprisingly affecting to me.  You can see the ending coming a mile away but it doesn’t make the journey any less depressing.

Captain Phillips is a fine film that works on many fronts.  It’s a well constructed action thriller.  It has some interesting political talking points.  And its held together by some wonderful central performances from not just Hanks but also two pirates in particular – Barkha Abdi as Abduwali and Barkhad Abdirahman as the teenager Bilal.

One of the perennial bugbears of this film is a news story that broke suggesting that Phillip’s role in the film has been embellished and that some of the crew are unhappy with him for risking their lives.  A lawsuit was even filed.

The film actually shows the events agreed upon by all parties and Greengrass is apparently well aware of the accusations and seemed to go to some lengths to include their perspective in the film.  Captain Phillips received email warnings of a possible pirate attack.  He discussed it with his crew and refused to deviate from his course because he believed the pirates would reach the vessel regardless.  Whether this was the right call or not is what is disputed and left to the viewer to determine.

Regardless, I’d encourage any prospective viewer not to be discouraged by the anonymous criticisms.  The film certainly does not lionize Phillips and show him in some implausibly heroic light.  In fact, it becomes pretty clear in the final act that the film isn’t even really about him.

Summary : A riveting and eye opening account of modern day Somali pirates and what drives them to do what they do.