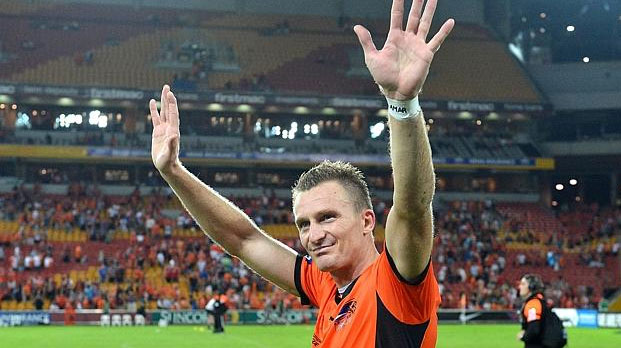 Brisbane Roar advanced to their third home grand final in four years when they defeated Melbourne Victory 1-0 in a tense, rain soaked semi final on Sunday night in front of 30,000 fans.  The goal came from, who else?, Besart Berisha.  In what turned out to be his penultimate game in the orange and black, Berisha scored his 47th goal in 75 appearances, when he latched onto a ball from Matt McKay, found room past Nick Ansell and beat Nathan Coe on the near post to give Brisbane the win over his new employers next season.  In a mark of respect to the Victory, he celebrated in muted fashion.

The game was a tight contest for the full ninety minutes and it wasn’t really until stoppage time that the game blew wide open with Melbourne Victory having a penalty claim turned down when Matt Smith appeared to bring down Archie Thompson in the penalty area.  Referee Stredbre Dilovski waved play on.  A minute later, Thompson fired home from point blank range only for a goal line clearance from Matt McKay to save the day.  That was as close as they would come. 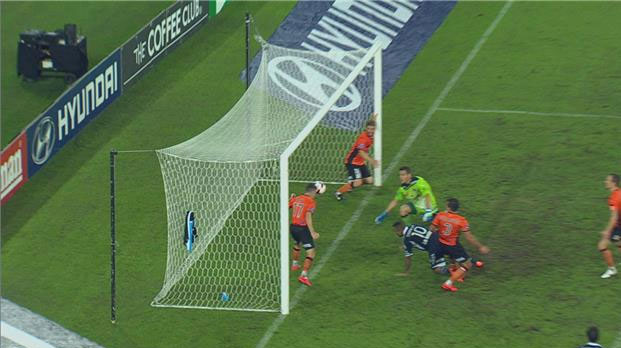 In the other semi final, Western Sydney Wanderers gained a measure of revenge against last years champions Central Coast Mariners by beating them 2-0 to grab the other finals berth.  In one of many items to be reviewed in the post season, the Mariners were the victims of some unfortunate match scheduling that saw them play a do-or-die Champions League fixture just 3 days prior.  They looked exhausted against the Wanderers and far from their best.  To be fair to the Wanderers, they too had an ACL fixture although they at least had the benefit of no overseas travel.

The results set up a grand final fixture between Brisbane Roar and Western Sydney Wanderers.  First versus Second.  The Old Guard versus The Upstarts.  The Wanderers are to be commended for making their second grand final appearance in as many seasons and they will be keen to win the silverware and avoid the label of chokers who can’t quite win the big one.  For the Roar, it has the potential to be coach Mike Mulvey’s first piece of silverware in just his first full season in charge of the Roar.  And in many ways, all eyes will once again be on Besart Berisha and his odyssey to leave the Roar with a second championship title to his name.

We’re set to have a cracking atmosphere at Suncorp Stadium on Sunday.  In the past two grand finals, the Roar have played against Central Coast and Perth who are relative minnows of the competition that don’t have large traveling supporter groups.  In both matches, their supporters were allocated two bays for their fans.  The Wanderers have a gigantic following by comparison and have been given 12 bays for their fans, roughly a quarter of the stadium.  It should be a lively atmosphere on match day both on and off the field as The Den will be in full voice to drown out the Red and Black Brigade.

Previous: The Prognosticator 2014 Checklist
Next: The Amazing Spider-Man 2: Rise of Electro