Satoru Iwata has passed away 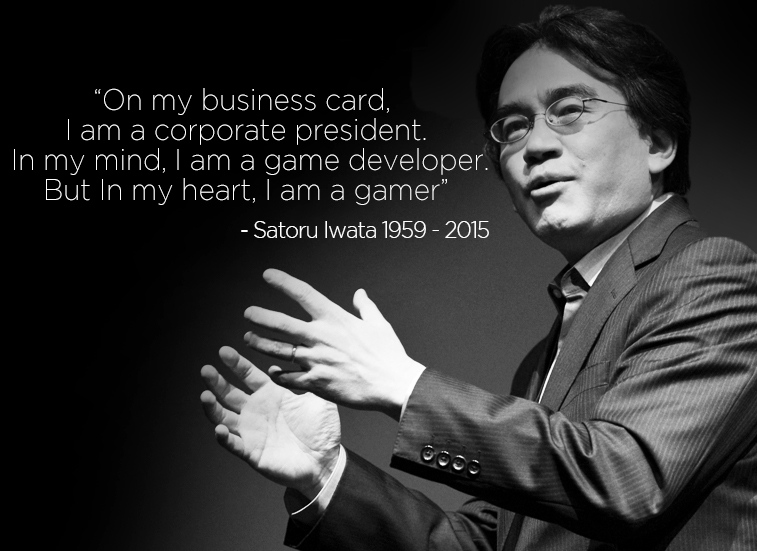 On Monday morning, news broke that Satoru Iwata, the fourth president of Nintendo Co. Ltd had passed away at the age of 55 from a bile duct growth.

Its tough to think of a passing in the video game industry that has resonated with and impacted so many people.  Thousands of gamers mourned through social media and message board communities.  Game developers and industry figureheads from both East and West paid their respects.  Even companies that have nothing to do with video games – Skype, Amazon, PETA to name a few – posted tributes online celebrating the life and accomplishments of Satoru Iwata.

I count myself amongst the millions that were both shocked and deeply saddened by his passing.  Video games are one of my favourite pastimes and has been since childhood.   Nintendo was the company that made me a lifelong fan and in the last decade, Iwata has been instrumental in not only nurturing that love of gaming but also fostering an environment that has produced some of the most entertaining, joyous and creative games the industry has ever seen.

An incredibly sad start to the week. RIP Satoru Iwata. You had the respect of a world of gamers, including all of us at Rare. #ThankYouIwata

Since his passing, much has been written about Iwata’s storied career.  In part, his wide-reaching appeal can be traced back to his humble every man origins.  Born and raised in Sapporo, Japan, he showed a flair for programming at a young age, even creating a baseball game on a calculator as a teenager.

He cut his teeth in the industry doing freelance work for HAL Laboratory before joining them full time upon his graduation from the Tokyo Institute of Technology where he majored in Computer Science.

The stories of Iwata’s programming prowess are now the stuff of legend.  A popular TV Tropes article sums it up nicely:

Ladies and gentlemen, meet Satoru Iwata, global president of Nintendo, former acting president of HAL Labs. When he was younger, he disassembled the programs for his home computer by writing down the memory dumps by hand. Mind you, this was before printers. Among his achievements as a game programmer, he…

… ported the battle code of Pokemon Stadium to the Nintendo 64 despite not having any access to crucial documents. And he did it all in a week.

… programmed EarthBound (from scratch) in its entirety, also with remarkable speed. At the time, the project was very close to being jettisoned due to the unmanageability of the original coding. The coding itself is a huge scripting language, so complex that, theoretically, the text system alone could be used to write an emulator, if altered somewhat.

… personally compressed Pokemon Gold And Silver, which filled the cartridge despite still being half-finished. That’s the reason the setting for Pokémon Red and Blue was included (with only two locations removed) in the games—there was that much space left after he was done.

… debugged Super Smash Bros. Melee all by his lonesome. It only took him two weeks—which was all the time he had to get it out.

Iwata stood out amongst a sea of corporate CEOs not just because he was the face of the oldest games company in the world but because he embodied so many of its best qualities.

He was a passionate gamer first and foremost.  He was also an accomplished and talented games developer.  Then he took what he loved about games – their creativity and ability to inspire joy in people of all ages – and made it a cornerstone of Nintendo’s philosophy when they appeared to have lost their way with the Gamecube.  He gave a famous speech at the Game Developers Conference of 2005 where he lead a call to action to the games industry – imploring developers to reach out to a wider audience beyond the traditional ‘core’ gaming audience of young adult males.

He backed up his words by overseeing the release of the Nintendo DS and Nintendo Wii, two systems that restored Nintendo’s fortunes and seemingly vindicated his highly unorthodox style.  Both games systems broke the mould, enjoyed extraordinary commercial success and laid the groundwork for gaming reaching a wider audience today than anyone would have imagined possible ten years prior.

But above all else, the reason Satoru Iwata’s passing has sparked such an outpouring of grief is that he was by all accounts one of the nicest guys in the games industry.  Iwata became a very visible leader at Nintendo – a far cry from his predecessors – thanks to his highly entertaining and informative Iwata Asks and Nintendo Direct videos.  These videos gave fans an insight into upcoming games, showed a glimpse of the inner workings at some of Nintendo’s most talented development studios and provided a perfect showcase for Iwata to show off his quirky, inimitable style.  Sight gags involving bananas, Muppets and Street Fighter spoofs were not uncommon in Nintendo Direct videos.  Iwata was not afraid to poke fun at himself, have a good time and best of all, he had an infectious enthusiasm for games that shone through.  “You want a revolution?  Because we’ve got one”  were the famous words he uttered before unveiling Project Revolution, the console that eventually came to be known as the Nintendo Wii.  Like a real life Willy Wonka, Iwata loved developing creative new products and seemed positively giddy with excitement to unveil them to the Nintendo faithful.

Nintendo has had a rough time  of it in the last five years with neither the successor to the Wii or the DS attaining the same level of success that the company would have hoped.  Nintendo is currently undergoing a transition phase with a new system on the horizon (Project NX) and a change in games development policy that finally saw them break down a resistance to mobile gaming.  During this tumultuous period, Iwata was battling cancer and fighting to turn the company’s fortunes around.  Ever the humble servant to the company he loves, he took a pay cut so that other staff could avoid retrenchment.

At 55, Satoru Iwata is gone too soon.  He should have lived to see the launch of the next system, had his hard work pay off and seen a change in the company’s fortunes for the better.  After a lifetime of work he should have lived to a ripe old age, having the opportunity to retire and bask in the knowledge that he brought so much happiness to so many people.  He was a giant of the games industry and a legend at Nintendo.

Previous: Whatcha Playin’ – The Witcher 3: Wild Hunt
Next: Diary of a Football Fan