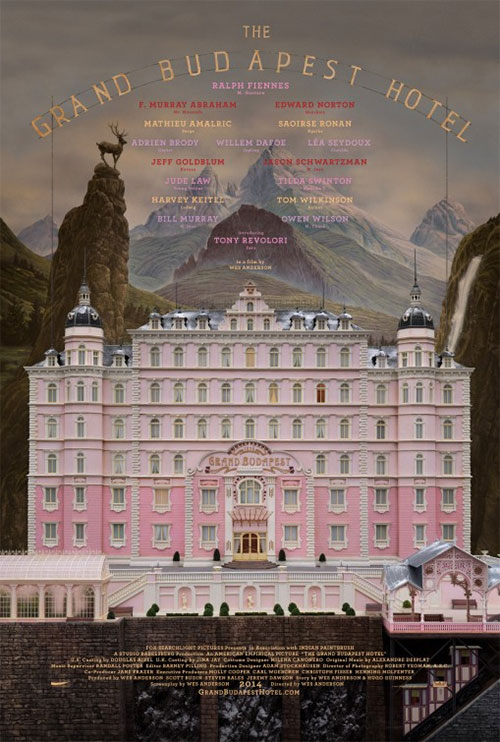 Wes Anderson, an auteur who people have come to either love or loathe, continues to refine his work with each cinematic release and so it is with The Grand Budapest Hotel.  Each film seems to build upon the last.  There are recurring themes (generational differences, relationships between adults and children) and there are constant refinements (his visual style and the verbal tics of his script).  As Anderson has gotten older, his films seem more disciplined than ever.  Part of what drove his detractors nuts were the pacing and ambling direction of his most indulgent films like The Royal Tenenbaums and The Life Aquatic With Steve Zissou.  His more recent films have a new found sharpness and focus in editing and pacing.  The Grand Budapest Hotel clocks in at a lean 100 minutes and there isn’t a wasted scene in the whole production.  Every scene, every line and every shot has a purpose.

The Grand Budapest Hotel is a comic caper about the irrepressible Gustave H, a famous concierge from the Thirties who worked at the eponymous hotel between the two World Wars.  The story is told from the perspective of his faithful lobby boy Zero.  As Zero explains, Gustave H prided himself on delivering impeccable service to his customers and in the case of his older female clientele, that extended to servicing them in the bedroom.

The fruits of one such tryst with a decrepit octogenarian, Madam D, results in Gustave H unexpectedly being the recipient of her most valuable possession, a portrait titled Boy With Apple, which she bequeaths to him in her newly arranged will.  Furious, the family members of Madam D hire a crazed hit man named Jopling to take out Gustave H.  Worse still, he gets prosecuted for killing Madam D and is sent to prison.  It’s up to Zero to team up with his young fiancee Agatha to bail Gustave H out and escape the clutches of the fiendish hit man.

So far, so Wes Anderson. 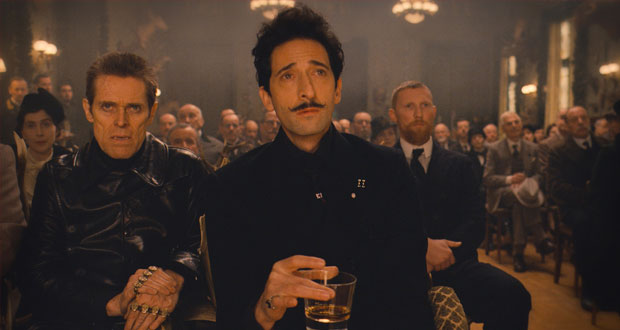 I count myself in the camp that always had plenty of time for Anderson and his films and I consider The Grand Budapest Hotel to be one of his best.  Ralph Fiennes is a stand out in the lead role as Gustave H and he really excels in showing off his comedic chops.  Seriously, who knew he had it in him?  I’m pretty sure this is his first comedy role and he absolutely nails it.

If you come in unspoiled, the rest of the casting choices are a treat.  There is a plethora of cameos from famous names and Anderson regulars.  Everyone is on the same page, reveling in taking part of Anderson’s madcap universe where twirly moustaches, birth marks and comically over-exaggerated glares are the order of the day.

Aesthetically, the film is very much a continuation of the style that Anderson developed with The Fantastic Mr Fox and Moonrise Kingdom.  The long shots use pull focus, to make it appear as though we are seeing miniature models.  The framing of the camera often captures the characters in profile or staring directly at the camera, as though we’re seeing a live action comic strip.  The characters even seem to move on an X or Y axis.

The story itself is full of zany characters and morbid humour that reminds me of Roald Dahl’s comedic sensibilities.  Although the action and one liners come in thick and fast, its all anchored by a touching relationship between Zero and Gustave H which starts off as mentor and student but evolves into something more like father and son.

There is so much to like about this film.  It has a distinctive look that is unique to Anderson’s films.  It is consistently funny and has a twisting tale that is imaginative and unpredictable.  And at the centre of it all is Ralph Fiennes living it up in one of his most unlikely performances.  His turn as the dashing, toffee nosed and lecherous Gustave H is a thing of beauty.

Summary : An entertaining comedic romp from Wes Anderson in which Ralph Fiennes is the unexpected comedic highlight.