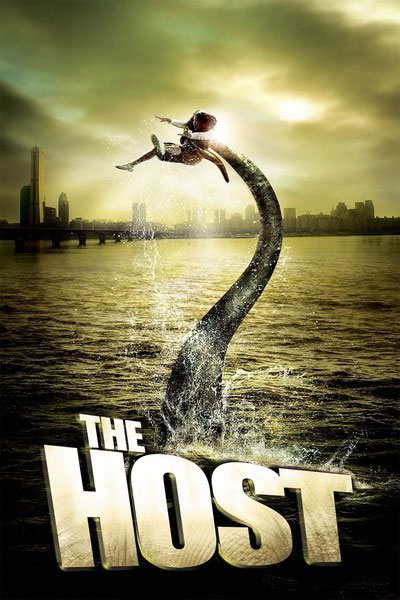 The Host (originally known as Gwoemul) is a Korean blockbuster film that is about a gigantic catfish with legs that terrorizes the Han River area of Korea.

Written in true monster movie style, the creature is created when a scientist, under the direction of a boorish American, pours chemicals down a waste disposal leading straight into the Han river.  Several years later, this oversized beast crawls out of the water and starts chowing down on the citizens of Seoul.

To personalise the story, we follow the fortunes of the highly disfunctional Park family.  The Park’s patriarch Hie-Bong owns a snackfood stand in the middle of the park next to the Han River.  His dropkick son Gang-Du runs the place but only barely.  Gang-Du appears to suffer from narcolepsy and constantly falls asleep on the job.  He also appears to be Korea’s answer to Homer Simpson and gives his pre-teen daughter beer to drink when they watch TV.  Gang-Du also has a sister named Nam-Joo who is an excellent archer and an alcoholic brother named Nam-il who is somewhat miffed that despite being the only university graduate in the family he is constantly overlooked.

When the monster starts attacking people near the river, it kidnaps Gang-Du’s daughter Hyun-Seo.  When the family discover that Hyun-Seo is still alive and at the monster’s lair, they band together to try and rescue her.

The Host is a film that is quick to switch between action, drama and comedy.  The tone for the film is set early on When the Parks assume Hyun-Seo is dead and they attend a funeral service.  They start off by weeping but soon after, all four Parks are on the floor rolling around (!) and yelling at each other.  Then they start a fist fight.

The family dynamic is both humourous and engaging and really helps set the film apart from the usual genre cliches.  In fact, there is a scene early on in the film where your typical all American hero steps up and tries to save the day only for the monster to make short work of him.

There is something of a secondary theme to The Host about how Americans are viewed in Korea.  They are not cast in favourable light at all.  Most of this seems to be the director’s own political commentary as the American government plays a hand in the story and they are seen to be meddling in business that shouldn’t involve them and they use misinformation and propaganda to justify their actions.

The real stars of the show though are definitely the Parks and the monster.  The creature is made entirely from computer generated effects and while its not quite up to the level of some Western blockbusters, you do still get to see a lot of the monster up close and the fact that it looks slightly ‘off’ helps add to the monster movie aura (read: cheese).

Keep an eye out for this one.  I’m sure you’ll hear more about it during the year.

Director:  Joon-Ho Bong Writer:  Joon-Ho Bong Cast:  Kang-Ho Song, Hae-il Park The Host (originally known as Gwoemul) is a Korean blockbuster film that is about a gigantic catfish with legs that terrorizes the Han River area of Korea. Written in true monster movie style, the creature is created when a scientist, under the direction of …

Summary : A monster terrorizes Korea and we see it through the eyes of a hilariously dysfunctional family. Funny, edgy and brilliant.