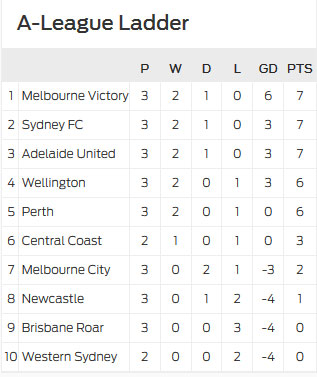 We Are Totally Rubbish

When the Roar struggled in the 2012/13 season under new coach Rado Vidosic, there some records that fell during his brief reign that symbolized the rot at the club.  Most notably, the club lost their first ever away game to Central Coast Mariners for the first time in the history of the competition.  Not long afterwards, disenchanted players Mitch Nichols and Erik Paartalu left the club seeking greener pastures after putting in some shockingly lazy performances.

When the Roar lost 2-0 at home to Sydney FC last Friday, it snapped a nine game winning streak that the Roar had at home to Sydney FC.  I had such fun during that time.  We used to reliably put at least four goals on them and rip their defense to shreds.  On Friday night we struggled to play out of our own third.  Zero points out of a possible nine is also the worst start by a club in the history of the competition tying the efforts of the now defunct North Queensland Fury.

Truly, it has been a start of a season to forget.

Then tonight, the club announced that it had parted ways with Liam Miller, an integral player in last year’s championship side.  Miller left not long after the Courier Mail reported that he had failed to turn up for a reserve grade game.  Local journos on Twitter have been asked to comment further but word is there is still ‘more to the story’ and that they are waiting for all the facts to come to light.  Clearly, all is not well with the Brisbane Roar and you get the feeling it may get worse before it gets better.  As I mentioned last week, even during all the trophies and championships of the last four years, the low periods for the club tend to be really low.

The club have a fortnight to get it together thanks to their game with the Wanderers being postponed due to the Asian Champions League Final.  The Roar’s next game is against an unremarkable Melbourne City side.  It’s too soon to call it a crisis but failure to get a result next weekend will result in some serious heat being applied to Mike Mulvey and the senior players in the team.  If something doesn’t happen soon, heads could roll.

How do you top a five goal local derby thriller played out in front of 42,000 fans?  By putting on a seven goal bonanza in front of 47,000 of course.

Victorians did their best to the top the spectacle of last week’s Sydney derby when Melbourne Victory and Melbourne City clashed at a sold out Etihad Stadium.  City twice took the lead in the first half before a Besart Berisha hat trick, including a goal 45 seconds after half time, lead to the Victory running rampant and ultimately claiming the spoils in an entertaining derby fixture.  The game was billed as a showcase for David Villa but despite some promising first half chances, he was ultimately marked out of the game and it was the lethal former Roar striker that stepped up to the plate.  Oh how Roar fans miss Bess’ contributions with both goals and attitude.  The game shot the Victory to the top of the table but they also broke a rather dubious record on the way.  They are the first club to concede in 22 consecutive games.  Its the defensive frailties that the club has that lead me to believe that at the business end of the season, it will be Sydney FC that will be favourites to pick up silverware.

If Brisbane Roar, Melbourne City and Western Sydney Wanderers all continue to underperform this season then it looks like Adelaide United, Perth Glory and Wellington Phoenix are the clubs that will pick up the slack and battle it out in the middle of the table.  The Phoenix made it back to back wins with a comfortable 4-1 victory over the Jets and Adelaide United looked impressive at home against Perth Glory.  To their credit, the Glory bounced back big time in the mid week FFA Cup, beating Melbourne Victory 4-2 with Andy Keogh netting a hat trick.  It looks increasingly like a two horse race between Keogh and Berisha for golden boot honours this season.

Previous: Youtube Friday: Anatomy of a fight scene
Next: The Monogram Murders by Sophie Hannah