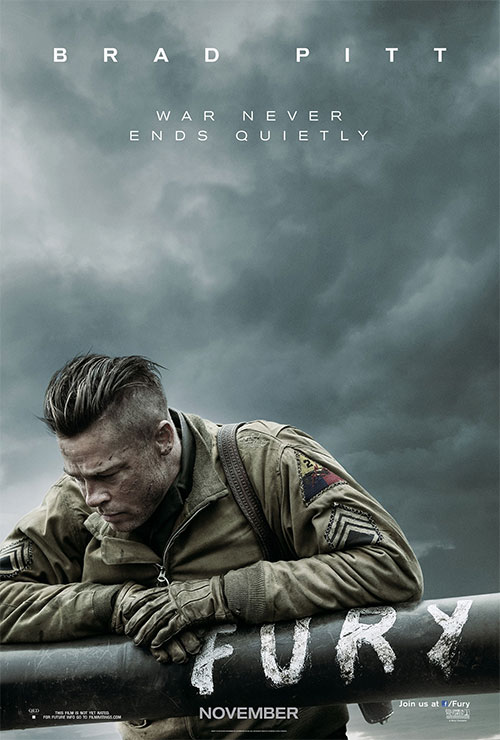 Fury is the latest film from David Ayer, the director of End of Watch and Training Day fame.  He is a director and writer who has an eye for making great character driven dramas and as an admirer of his earlier work, I approached Fury with plenty of interest despite its slightly ho hum reception both critically and at the box office.

You might wonder whether a film about World War II in 2014 could actually find a fresh angle on its subject matter and in the case of Fury, I think Ayer accomplishes just that.  He sets the film in the final stages of World War II with the Nazis on the backfoot and the Allies steam-rolling into Germany.  We follow the fortunes of a single tank, the eponymous Fury, and its five man crew lead by Don “Wardaddy” Collier, played by Brad Pitt, alongside “Bible”, “Coon-Ass”, “Gordo” and new recruit Norman.  The crew of the Fury are all seasoned and war-weary veterans who are at times shockingly desensitized to the horrors of their surroundings.  The audience will relate more closely to Norman, who knows almost nothing of his surroundings and is naive about what lies ahead in the campaign.  Norman is well mannered, meek and a pacifist which immediately draws the ire of Wardaddy who is concerned that his inability to pull the trigger will jeopardize the Fury’s safety.  His soft spoken temperament also acts like honey for flies as the rest of the Fury find him an easy mark to bully and antagonize.

Over the next two hours, we see Norman undergo a trial by fire as he experiences several rites of passage for soldiers in combat.  At first, his hesitation in firing on a young SS soldier results in the gruesome fiery death of a comrade which infuriates Wardaddy.  Unable to chance Norman failing in his duties a second time, he takes a German POW and forces Norman to kill him.  It is a brutal initiation but has the desired effect.

Fury features a catalogue of scenarios that will be familiar to anyone who has watched classic war films such as All Quiet On The Western Front, Saving Private Ryan and The Big Red One.  There is a fleeting romance with a beautiful farm girl who doesn’t speak English.  A tense stand off with a German tank that has superior armour.  Grief and mourning over the death of a colleague.  A deadly sniper.  The loss of innocence for those who live through it all.  What makes Fury particularly effective is that there is a strong and believable comradery between the crew of the Fury.  The relationship between Norman and the rest of the crew gradually evolves as he becomes battle hardened and wins their respect with his marksmanship.

The film also takes a warts and all approach towards the behavior of the Allies which is pretty uncharted territory for World War II films.  There are many films about Vietnam or Desert Storm that cast a more critical eye towards the behavior of the American soldiers but when you consider even relatively recent World War II classics such as Saving Private Ryan, which is championed for its gruesome but realistic portrayal of combat itself, the troops are always shown in a flattering light.  Not so in Fury where the crew are shown to be cynical and hardened grunts that can find catharsis in killing, who slaughter animals for therapy and claim sexual conquests in the towns they ‘liberate’.

I don’t believe Ayer intends to demonize the soldiers’ behavior.  Instead he uses a realistic and unflinching lens to study his characters so we can see what makes them tick and how they cope with the horrors of war.  With this in mind you can see some thematic similarities to the officers in Training Day and End of Watch. 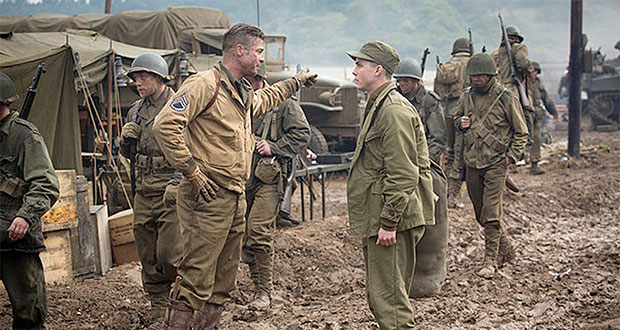 What I like about Ayer is that he has a knack for writing great conversational dialogue.  Its not particularly flashy or predisposed to giving us one liners.  Instead it feels natural and organic which goes a long way towards building up that sense of friendship and comradery between the soldiers in the tank.  They have in-jokes, little idiosyncrasies and traits that get on one anothers nerves.  But in time they also come to care deeply for one another.  After all, all they really have is each other.  And when one of them falls in combat, you care and you feel for them.  And thats just about the most important thing for a film such as this.

Fury also serves as a great showcase for David Ayer in other ways beyond his writing.  The tank combat scenes are extremely well crafted and put together.  The battles are shot and framed dramatically but we can always understand what is happening, who has the advantage and what the Fury must do to try and survive.  Ayer also gets plenty of value out of his actors.  Sure Brad Pitt is an experienced and reliable hand but when was the last time we saw Shia LeBeouf play such an entertaining role?  And for the part of Norman, who has the most challenging and well rounded character in the film, Ayer draws a fantastic performance out of the lead from the Percy Jackson movie.

Sadly, I think Fury is a film that will be forgotten by most very quickly.  It’s not a blockbuster, nor is it an award season film.  Mores the pity because I think its an excellent if not understated work that delivers tension, thrills, humour and heart ache.

Fury follows the fortunes of five soldiers in a tank during the final days of World War II.

Summary : Fury is a tense yet rewarding film that delivers a unique take on the World War II combat genre.