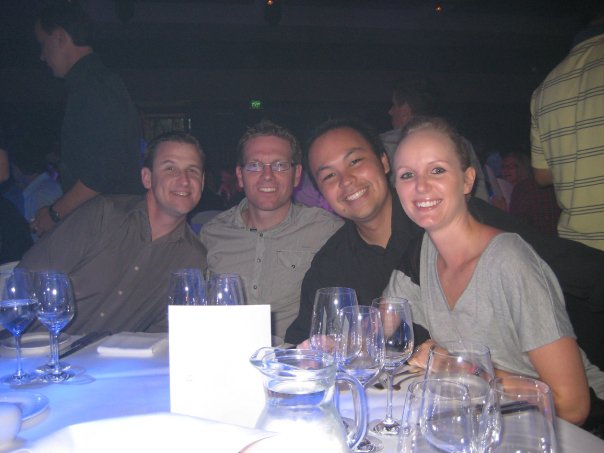 Work conferences are a strange beast.  Its a great time to catch up with lots of work colleagues, particularly those interstate and out of town who you don’t get to see that often.  There’s 2 nights put up in a nice hotel and plenty of drinking.  You usually get some nifty swag from the vendors peddling their wares too.  And sandwiched in between all of it, is a lot of sitting down and listening to people give power point presentations.

This year was our first ever merged 3/Vodafone conference.  The scale of the event was a pretty good reflection of just how massive the two companies are when put together.  The first day of the conference ran for a considerable nine hours (!) but they packed it with a lot of stuff.  The list of special guest appearances included no less than Craig Lowndes, Ricky Ponting, Brett Lee, Simon Katich, Carl Barron, a former young Australia of the Year and trainer Michelle Branch from The Biggest Loser.

So about Michelle Branch.  She came out and gave a motivational talk and decided to hold an impromptu fitness contest.  She threw out several balls into the auditorium and whoever they hit, she invited on stage. 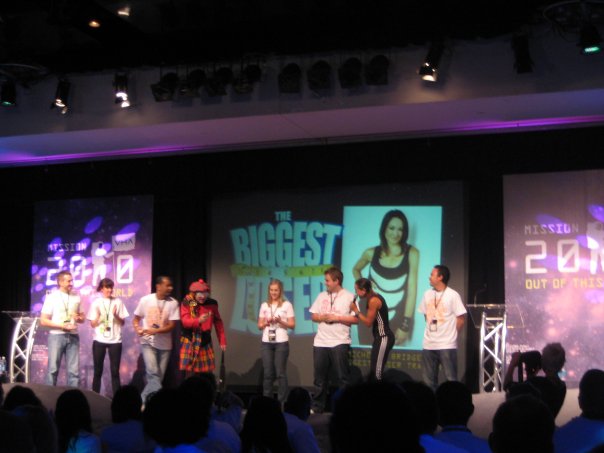 So I end up on stage with five other people in front of seven hundred of my work colleagues and peers.  Our first challenge was to have all six contestants maintain a ‘hover’ position (resting on forearms and toes, without stomach touching the floor) until 2 people dropped out.  This went on for nearly 3 minutes before two people dropped out. 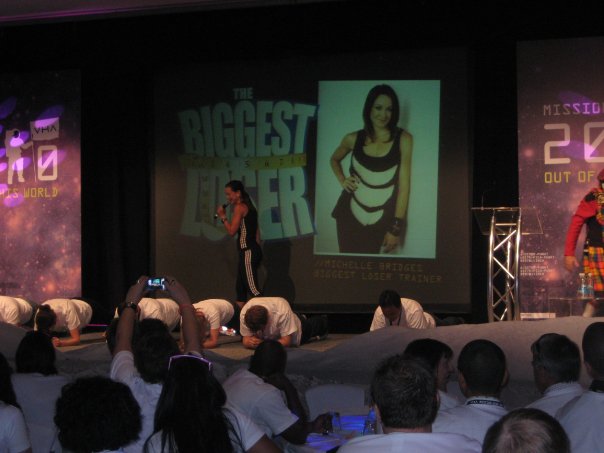 Then when we were down to four, we had a push-up elimination round, with the fastest two to complete ten proceeding to the final round. 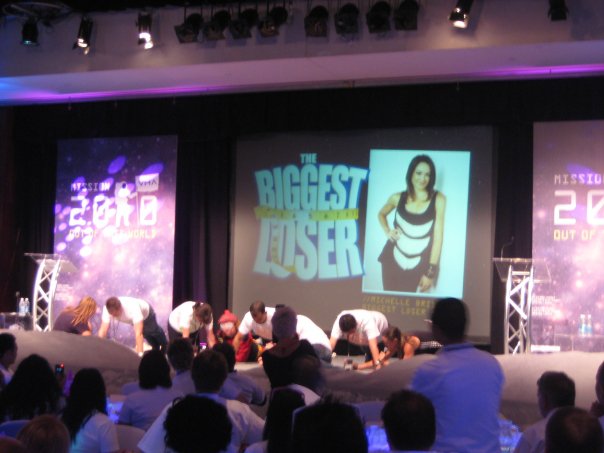 I don’t quite know what business I had making it through to the final round but it came down to a 1 minute challenge to see who could do the most step-ups.  I was already exhausted and it was pretty hard doing all this when you’re out of shape and wearing jeans.  It was nice being cheered on and having such vocal support from all the different people I had worked with in the last eighteen months (my old Sales team, the Sydney Marketing team, my current Servicing team and all the other random people I’ve met along the way).

In the end, I came out on top and won a new Samsung 40″ telly.  Thats right.  I won a fitness competition.  Woo!

I’m not really sure what to do with it since we just bought a new tv less than two months ago but this minor inconvenience was more than made up for by all the backslapping and compliments from the people during the rest of the conference who are now under the illusion that I am actually in shape.  I grew quite a humongous ego that day, to paraphrase a line from BASEketball.

Tagged with: The Biggest Loser work

Previous: The Holiday in Sydney
Next: Lost Season Six