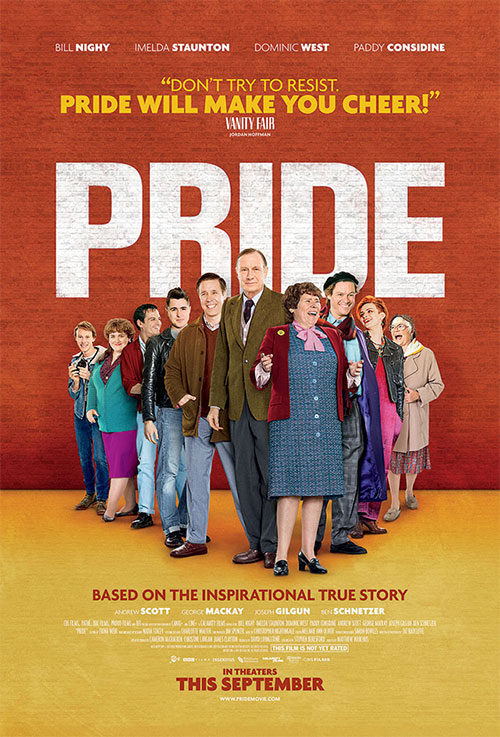 In the civil rights movement of the modern age, the struggle for equality spanning gender, race, religion, class and sexuality can often be a divided one.  Mark Stanton, a young gay activist in the Eighties recognized that this divide and conquer approach was a big part of what helps the establishment maintain the status quo.

During a rally for gay rights which draws a small, indifferent audience and close to non-existent police presence, Stanton realizes its because the national spotlight has shifted to miners who are on strike.  Rather than compete for attention, Stanton decides the right thing to do would be to help their cause.

Pride is a feel good film told about what he did next.  It’s based on a true story in which a London based Gay and Lesbian community (Lesbians and Gays Support the Miners) reached out to miners in Wales who were on strike during the Margaret Thatcher era and fund-raised a record sum of money for their cause and their families.  Although the mining families were initially reluctant to accept the support of the group, the relationship was eventually a success and lead to the recognition of LGBT rights in the Labor Party’s charter.

Pride is told in the style of Billy Elliott or The Full Monty, a fish-out-of-water tale in which a conservative pint-sized Welsh village is confronted by and comes to accept the support of an unlikely ally.  The film uses a well worn formula but does so with such gusto, enthusiasm and love for its subject matter that it won me over.  It’s an effective, populist style of film making that purposefully keeps the darker and unseemly elements of the story off-screen to make it suitable for the broadest possible audience.  Of course, this didn’t stop the conservative arm of the British Board of Film Classification from giving the film an ‘M’ rating and the Motion Picture Association of America rating the film ‘R’. 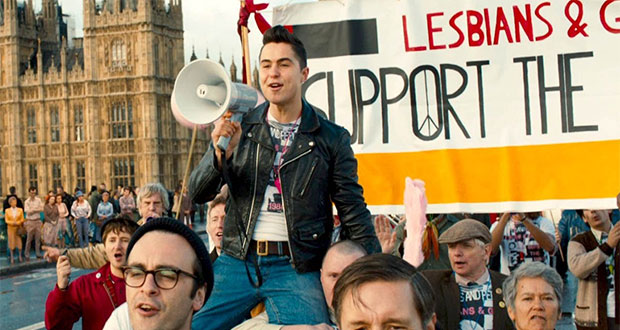 Pride is a such a delightfully put together film and its come from a very unlikely source.  Director Matthew Warchus is not a man that has a prolific body of work. Pride is just his third feature in fifteen years.  And yet he clearly has the calibre to rival many more celebrated and recognized names out of the UK as he draws fine performances out of his cast – both the fresh new faces like George McKay and Ben Schnezter, as well as the old favourites such as Bill Nighy and Imelda Staunton.

When it comes to civil rights films, there are films that can invoke anger and outrage at the treatment of the persecuted.  Most recently Ava DeVerna’s Selma was one such polemic that shined a harsh light on the police force in Alabama.  Pride is the opposite end of the spectrum.  It is a celebratory film about what people have done to combat persecution.  There isn’t much of the film that dwells on acts of bigotry.  Instead it prefers to look at how the miners and the LGBT community came to form a bond together.

In some ways, this type of film making can be a trickier proposition, as you risk giving off a sensation of ‘white-washing’ the harsh realities that the people faced.  Fortunately, Pride strikes all the right notes.  It avoids feeling facile and its sunny disposition doesn’t stand in the way of opportunities to inform, educate and open the eyes of the audience as to what Mark Stanton and his friends were able to accomplish.

Feel good films aren’t exactly in vogue nowadays.  Maybe it’s a sign of the times.  But Pride is a feel good film that is easy to recommend.  It celebrates the life of some brave, young activists that not only risked persecution and hardships for their own cause, but had the compassion and courage to support the cause of others as well.

A young group of gay and lesbian activists begin to fundraise for miners striking against Margaret Thatcher.

Summary : A crowd-pleasing film that shines a light on the amazing true story of the fundraising group "Lesbians and Gays Support The Miners" and the legacy they left

Previous: Ori and the Blind Forest
Next: The Classic Movies Project 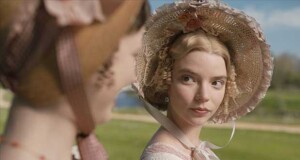