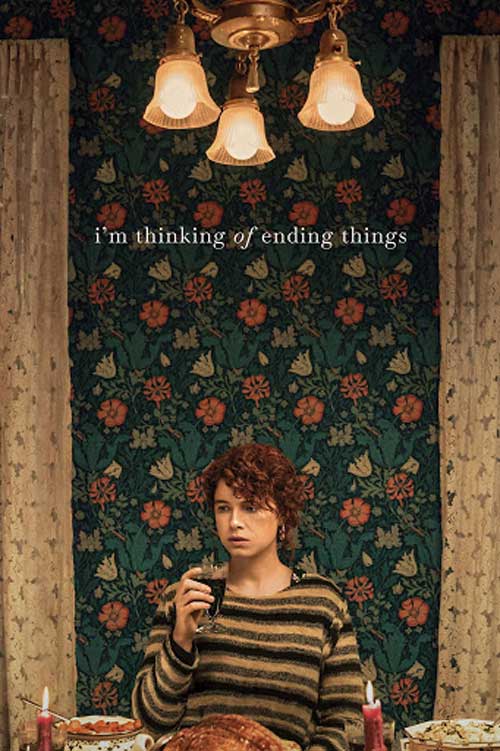 A young woman sits in the passenger seat of a car as her boyfriend Jake drives them to meet his parents.  They’ve been together for seven weeks and she ponders whether its worth continuing the relationship.

From this simple premise I’m Thinking of Ending Things develops into a tense, uncomfortable psychological thriller before descending into a full blown surrealistic horror where time becomes non linear and the characters travel through multiple dimensions.  Well, I’m not totally sure.  Months later, I’m still processing what I witnessed.

Each act in I’m Thinking of Ending Things feels like it exists as its own entity, as the film jarringly (by design) shifts between genres and keeps the viewer disoriented.  The young woman (played by Jessie Buckley) isn’t even named.  Nor is anyone else for that matter, except the boyfriend Jake.

The set up for meeting Jake’s parents has the trappings of a traditional horror film.  There’s some unexplained scratches on a door.  The music and lighting is moody and oppressive.  The meeting with Jake’s parents – played by David Thewlis and Toni Collette – is agonizing and uncomfortable. Thewlis in particular seems unhinged although the film doesn’t immediately play its hand as to whether he’s sinister or simply strange.

Soon after, I’m Thinking of Ending Things begins an accelerated descent into madness and chaos.  Timelines suddenly appear to skip and fold back on itself.  The young woman receives a cryptic voicemail memo about having “one question to answer” and suddenly the parents seem to exist in the house as both their younger selves and older selves.  What is going on here?

On the drive home, Jake mentions to the young woman several events she doesn’t recall.  A brief pitstop at an ice cream parlour gets weird.  One thing leads to another and soon Jake and the woman visit a high school whose sole occupant is a janitor that the film has flashed back to periodically throughout the film.  Something happens which I’m not sure I can do sufficient justice to describing and the final act concludes. 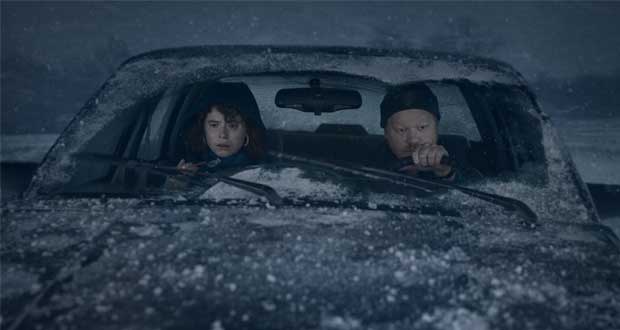 I’m Thinking of Ending Things is Charlie Kaufman’s first live action film he’s written in twelve years.  In Australia it was released at a time when most of the country was in some state of lockdown.  Watching this experience, where time is non-linear and character names don’t matter, was arguably perfectly timed.  During the time-stands-still mental haze of lockdown, I’m Thinking of Ending Things was probably evoking moods and feelings that Kaufman didn’t intend, but it is to the film’s benefit.

I can appreciate that when viewed in the wrong mood or mindset, I’m Thinking of Ending Things could feel like a shapeless mess.  But I can’t deny the film worked for me.  As a dark, trippy headfuck like the best works of David Lynch.  It’s evocative and expressive, a timely work during these strange days.

Full of misgivings, a young woman travels with her new boyfriend to his parents’ secluded farm. Upon arriving, she comes to question everything she thought she knew about him, and herself.

Summary : A sublimely weird surrealist horror film. A welcome return after a long absence from Kaufman.