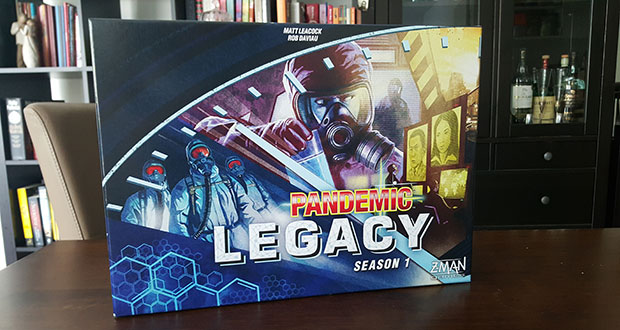 Earlier this year I wrote about Pandemic: Legacy, a table top game that was designed to be played as a 12 part series with any events in the game (character death, city succumbing to virus outbreaks) having a permanent effect on the board.  That write up has more detail on the general overview of the game.

This will be a blog that keeps a record of what happened each month in my play through of the game.

Needless to say it will be pretty spoilerific so if you ever intend to play this game, probably best not read this. 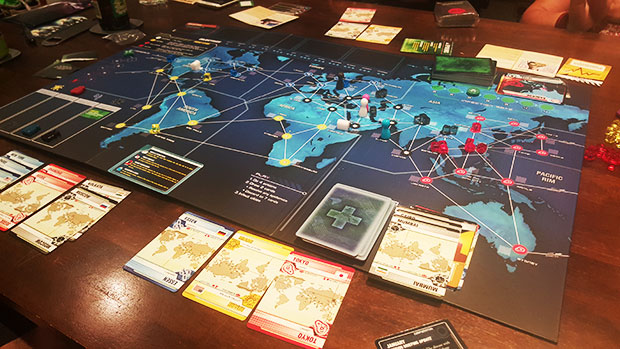 The first game plays pretty much like the vanilla edition of Pandemic.  In our team of four, three have very distinct roles designated to them.  As the medic, Edo is the ‘healer’ who can quickly clear cities of infection.  As a researcher Jaden can quickly trade and accumulate research cards so he finds the cures as quickly as possible.  Jen can move other players as the dispatcher so she acts as the conduit when we need to move someone across the globe quickly.  Jules was a generalist and contributed equally to curing and researching.

An event card was introduced into the player deck.  It introduces the first big shake up for the game.  The black virus has become incurable.  With a modified objective of curing 3 viruses, we still make it home relatively easily.  Only Essen succumbed to an outbreak and is now marked as ‘unstable’ (although this has no tangible affect…yet).

Outcome:  OBJECTIVE COMPLETE.  3 viruses cured.  1 outbreak.  As part of the end game, we unlocked a new character perks called relationships.  You can be rivals, families, co-workers or friends with other players and that introduces new rule modifiers unique to those two players.  For example family members starting a round in the same city are granted an extra move.  A rival can pick up research cards played by the other rival. 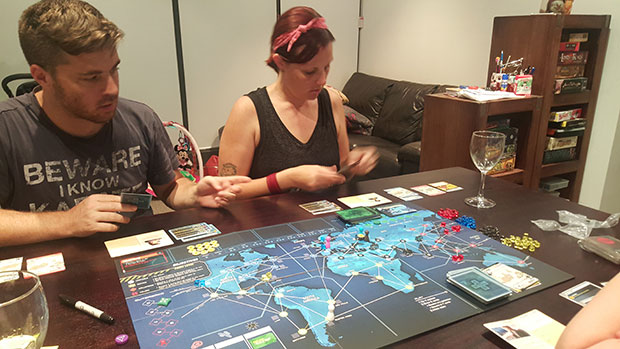 Once again, we worked really well together and pretty much aced this round with only a single outbreak in Osaka.  This was thanks in large part to Jules’ new quarantine officer character who was able to stop outbreaks in cities that were sitting on three virus cubes.  She bailed us out of at least three or four with this skill.

Outcome:  OBJECTIVE COMPLETE.  3 viruses cured.  1 outbreak.  Because we’ve won back to back games, we no longer receive any ‘funding’ bonuses – one time bonus cards that help our team. 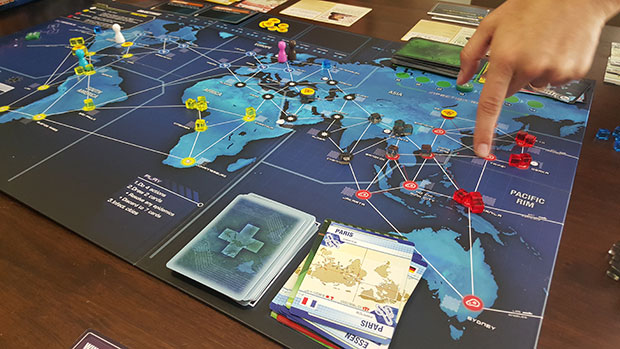 March introduced a new character – the Operations Expert who can build structures and fast travel to cities even if they’re rioting, collapsing or falling.  Although not immediately useful, he will almost certainly come in handy as more cities fall into ruin with a permanent effect.  We also got military bases introduced into the game.

This round was much tougher with no funding and two separate objectives – cure the viruses and eradicate one.  Without any funding bonuses and the inability to cure black virus cubes, its very easy for regions to get overloaded if you draw outbreak cards for the player deck in quick succession.  Thats what happened in this game as we had our worst performance so far.  Five outbreaks including repeat occurences in Kolkatta and Lagos which have left them in a ‘rioting’ status which means they are harder to travel to.

Outcome:  OBJECTIVE COMPLETE.  3 viruses cured.  1 virus eradicated.  5 outbreaks.  We won this round but only by the skin of our teeth.  The complexion of the map is getting interesting with two cities rioting and a handful more on the brink as ‘unstable.’ 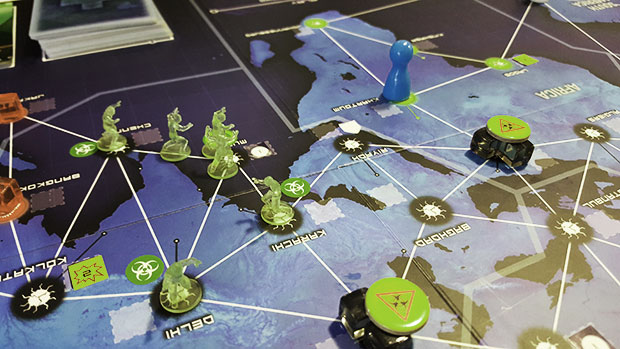 April started off with nothing new.  Huh.  But we did have an ‘x’ marker on the infection tracker which would kick into effect once there was a couple of epidemics.

About two rounds into the game…BAM!  We triggered it.  We learned that the incurable virus has mutated into COdA 403c and that the infected people in the cities have begun developing translucent skin and have transformed into rage filled monsters known as The Faded.  See-through zombies!  The game replaces the black virus cubes with Faded figurines.  Finishing a round in a city overrun with Faded means your character picks up a ‘scar’ wound.

This was by far the biggest development in the game so far and I’m so glad I was able to stay spoiler free for it.

Thanks to judicious use of Jules’ Quarantine officer and her handy remote quarantining capabilities, we were able to stave off any epidemics effectively and won the round with just a single outbreak.  I think when playing with four players, quarantine officer/medic/dispatcher/researcher is a pretty perfect combination.  You’ve basically got all four major food groups covered – remotely stopping outbreaks, quickly clearing viruses, moving players quickly and finding cures quickly.

I can’t wait to see where the game goes from here. 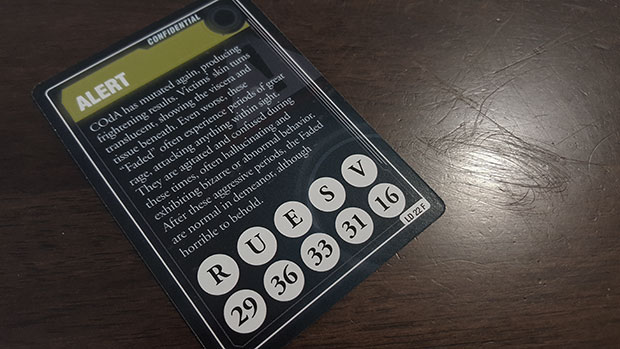 Outcome:  OBJECTIVE COMPLETE.  3 viruses cured.  1 virus eradicated.  1 outbreak.  We won this round easily but the introduction of the Faded is an exciting twist and presumably will make things even more challenging in the rounds to come. 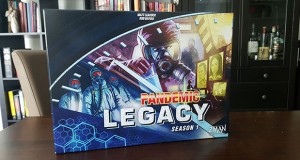 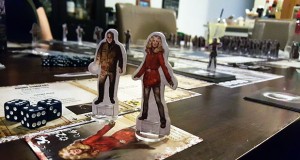