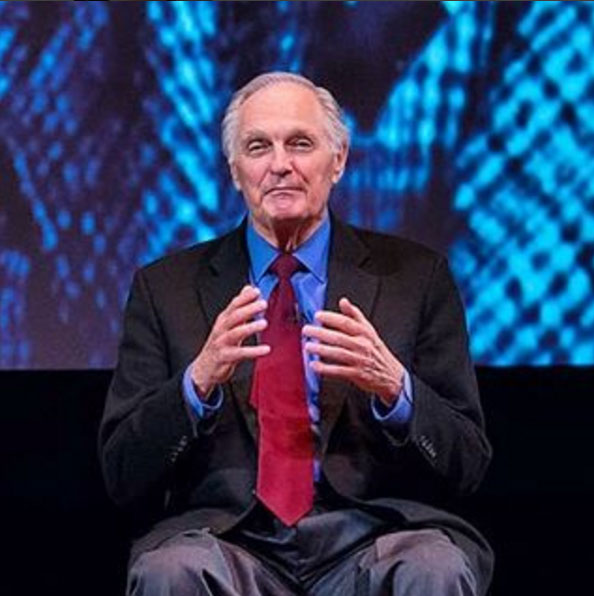 The World Science Festival is an annual event that began in New York in 2008.  It’s stated goal is to raise awareness and promote science to the general public.

In a major coup for our local community, somehow it was decided that the 2016 instalment would be held in Brisbane, Australia.  Hey, I’m not complaining.

There are plenty of fascinating looking exhibits and events that are held over the week.  There is a broad range of topics to explore from artificial intelligence to robotics to dinosaurs to saving the Great Barrier Reef.

On Friday, I was fortunate enough to see the opening night of Dear Albert, a play written by Alan Alda (M*A*S*H, The West Wing) about the life and times of famed scientist Albert Einstein.  Although Alda was not a performer in the production, he opened the evening and held a conversation with physicist Brian Greene at the closing of the show to discuss some of Einstein’s work.

As Alda explained in his introduction, Einstein is something of an enigma.  He is perhaps the most famous scientist in the world but little is known about his private life.  But he cuts an intriguing figure with his signature hairstyle and the widely seen photos of him cheekily poking his tongue out.  He’s also been co-opted for a bunch of internet memes quoting his theological musings.  Who is this guy?

This play is constructed by Alba but a lot of it is transcribing Einstein’s own words from the letters he exchanged with the various women in his life.  Einstein, is turns out, was quite the womanizer.  His veracity for scientific exploration was seemingly only matched by his fondness for courting women. 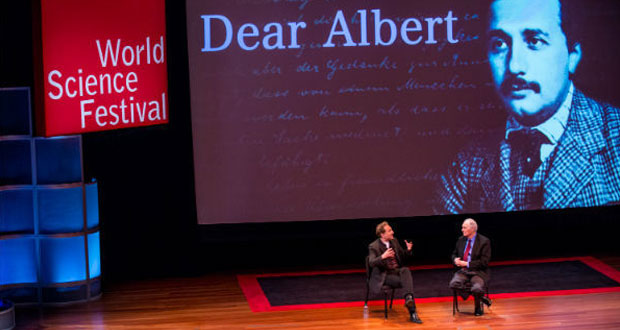 Dear Albert is a performed by three actors on stage exchanging letters.  Despite the sedentary stage direction I was completely absorbed by the readings of Einstein’s letters.  His first serious relationship was with a student named Maric – the only girl in his class.  Einstein’s flirtation in his letters show him to be confident, persistent and playful.  The exchanges are written in an eloquent turn of phrase that veer between explanations of scientific hypothesis and asking a girl out for a sausage and a cuppa.

It’s revealed in the letters that Einstein and Maric had a child named Lieserl whose fate is unknown.  It is presumed that she was either adopted or died of scarlett fever.  Einstein eventually marries Maric and they have two sons together but within five years, their relationship is strained to breaking point.

Einstein rekindles a relationship with a woman named Marie but is frustrated when Maric won’t grant him a divorce.  These exchanges are written in pretty terse, eyebrow raising exchanges as Einstein bluntly barters his money and possessions in the hopes of being granted his marital freedom.  Amazingly – and I believe truly – he offers Maric the winnings of the Nobel Prize for Science which he is yet to win but believes is a shoe-in to claim.  During the bitter exchanges, it is revealed that Maric slept with a rival professor who was publicly critical of Einstein’s work.

Eventually Einstein is granted his divorce only now he has his eye on his cousin Elsa.  Well, sort of.  A letter reveals that he was possibly playing along with Elsa but was actually interested in her daughter Margot (?!).

Although not always a flattering look at the life of Albert Einstein, Dear Albert humanizes the great scientist in a way that will never let me look at him in the same way.  He was insatiable in his pursuit of women.  He was also witty, charming and has a lot of the same hang ups in life as the rest of us.  Sometimes he’s working a dead end job he doesn’t like or is worried about money.  He has rivals at work that he has challenges with.  He has friends who he confides in and help him get through the troubled times.  Many of his challenges don’t seem all that different from the ones people face today.  Except for having a relationship with your cousin and possibly her daughter.  That’s not really a thing any more.

After the production, Alan Alda and Brian Greene held a sit down conversation about Einstein and space time in front of the audience.  I’ve been a long time admirer of Alda and love his most famous work as Hawkeye Pierce in M*A*S*H and as Senator Arnold Vinick in The West Wing.  At the age of eighty, Alda still had a captivating stage presence.  In his discussion with Greene he came across as passionate, funny and intelligent.  To this day he remains a prominent advocate of the arts and science.  It was a pleasure to spend the night watching his work.