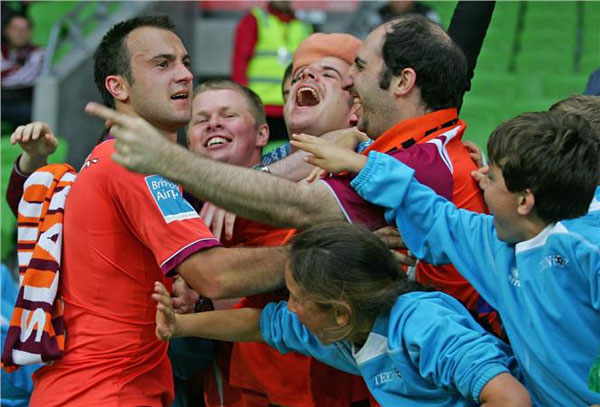 This weekend I was thinking back to Tim Parks’ book A Season With Verona where he talks about why we support the teams we do and what it tells us about ourselves as people.  When was the last time you sat back and thought about why you are a fan of one club but not another?  Or why you watch a game at all?

Being a sports spectator is often an amplified extension of your personality, an outlet for passion and even aggression.  There are those people who obsess over referees and almost seem to insist on arguing with their decisions as much as they do watching the game.  To them, its almost a mandatory requirement to believe the ref has got it in for your team and that every call against your side is an injustice.

There are those die hard fans who went to see every wretched game when the Reds were bottom of the table and getting hammered week in, week out.  Think about those loyal followers who still support once glorious clubs such as Nottingham Forrest and Leeds United who went from winning Premiere Leagues and FA Cups to becoming minnows in lower divisions.  What does that say about the psyche of a person who is willing to spend so much time and money, often sitting in miserable conditions, watching their side get flogged each week? 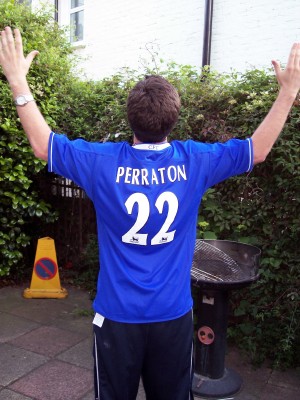 Others love the glory and backing winners.  Like the 20,000 additional fans that turned up when the Wellington Phoenix made it to the semi finals of the A-League last season when they hit a rich vein of form.  Or Pat, who supports Manchester United and Chelsea.  I think its a lot easier to understand the appeal of jumping on the bandwagon of popular clubs.

One unwritten rule of supporting clubs though is that its considered very poor form to change the team you support.  So even though your initial reason for supporting Westham or Blackburn Rovers might be as frivolous as antagonizing your brother by backing the team most likely to beat their side, you stick with them.  For years after.

Don’t even get me started on the complicated internal machinations that decide which national teams you support and in what order.  What happens for me when Japan plays against Australia?  Or Kenya meet New Zealand?  It depends on what sport, how good the team is and how I feel on the day.  How does Matt decide who he backs when Italy and England play each other?  Hypothetically, if Brunei reached the final of a World Cup and were facing England, who would the staff of The FAT Website cheer for?

Anyway, its interesting food for thought.

This weekend the Roar came up against an in-form Melbourne Hearts side that have been undefeated in five games.  Not long after kickoff, the Roar also found themselves a goal down after a quickfire volley from Gerald Sibon put the homeside in front.

A true test of a league-winning side is their ability to overcome setbacks.  The Roar were playing without suspended striker Reinaldo and they found themselves being outplayed at the end of the first half.  At halftime, manager Ange Postecoglou earnt his paycheck as the Roar came out a different side in the second half.  They lifted the tempo and peppered the Heart goal with plenty of shots.  Eventually, they had their equalizer through Kosta Barbarouses.  There was a minor hiccup when Costa Rican striker Solorzarno was brought down in the penalty area and Ivan Franjic flubbed the subsequent penalty but the Roar pressure eventually resulted in an 87th minute match winner from Solorzarno who tapped in from close range to seal the game.  The Roar are now undefeated in ten games and thanks to Adelaide’s unexpected 3-0 capitulation at the hands of the troubled Newcastle Jets, they go four clear at the top of the table.

With Adelaide faltering, attention now turns to the resurgent Central Coast Mariners who have been in fine form and can potentially leapfrog to the top of the table if they win the games in hand that they have over the Roar.  This week they sent out a warning shot to the league leaders by crushing the Wellington Phoenix 3-0. 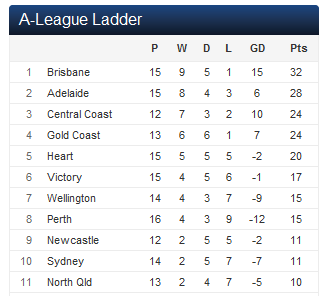