I Love You Phillip Morris is the remarkable true story of a gay con artist Steven Russell who commits a massive amount of credit card fraud, gets sent to prison, finds love with an inmate and then sets about becoming a lawyer so that he can secure an early release for his newfound lover.

The story is told as a black comedy and was penned by the John Requa, who’s previous work includes Bad Santa.  The material definitely suits his style.  A film starring rubberfaced Jim Carey acting as a campy prison convict gives you plenty of material to work with.

Carey is excellent as Steven Russell.  By the end of the film, you begin to wonder how this tale could possibly be true.  It’s never really explored how this small town guy with a sheltered religious upbringing managed to become so resourceful at committing such a sophisticated level of commercial and courtroom fraud.  Perhaps no one has ever been able to interview him to find out?

Regardless, this is an entertaining bio pic and Carey delivers some of his best work here since Man on the Moon where his performance as Andy Kaufman has familiar behavioural connections to Russell.  Both are enigmatic outsiders who gains notoriety by deceiving people on a massive scale.  Only difference is that Kaufman parlayed that into a successful acting career and Russell ended up as a white collar criminal. 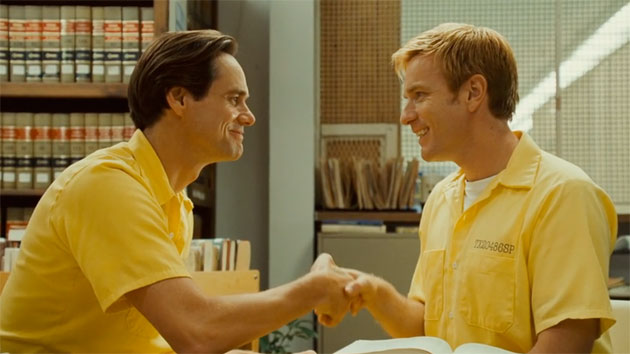 Tagged with: 5 Second review I Love You Phillip Morris

Previous: The First Blog of 2011
Next: 5 Second Review: The Legend of the Guardians: The Owls of Ga’Hoole