I went to a small dinner party last night with two friends from work and their partners.  It was an enjoyable evening  and it was also the first time I had met the wives of these particular guys that I work with.  They both had rather interesting careers:  one of them was an art curator and the other was a writer for Home and Away.

Tracey, the art curator, told me about a recent exhibit she helped set up for a guy from New Zealand.  This Maori dude had a ‘performance art’ piece that involved taking one tonne of polystyrene and then hacking at it with a pick axe.  We all enquired as to whether it was a sort of ‘Kill Whitey’ theme but apparently its not even supposed to be any expression of anger. 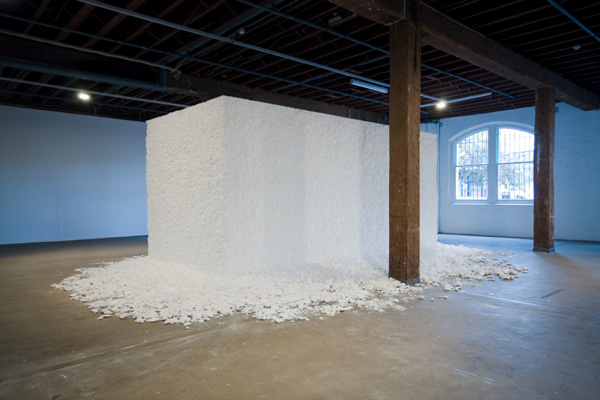 Working in a contemporary art gallery sounds like the best job.  Tracey told me about all sort of eccentric people she had met and the various exhibits they held including one where a guy pooped in 17 buckets as his masterpiece and another one where a Japanese guy made a gallery of common household items, such as Chair and Telephone.  During this exhibit, a puzzled civillian stuck his head in the door, saw some furniture scattered around the place and asked if ‘they had any art on today?’

After I had a few glasses of wine I started giving Faith, the Home and Away writer, some suggestions for new storylines.  All of these centered around Alex Papps and Nicolle Dickson reprising their roles as Frank and Bobby and coming back to Summer Bay.  Faith told me that they had to stick to the show’s lore and bringing back Zombie Bobby was out of the question.  So there you have it folks.  You heard it here first.  Frank and Bobby are not coming back to Summer Bay any time soon.  I was a little stunned to hear those characters hadn’t been on the show now for twenty years.  Has it really been that long?

I haven’t watched Home and Away since then although I’m told Alf Stewart is still on the show and he still says ‘S’truth’ and ‘flamin’ mongrel’.

On a different note, I spoke to Mike on the phone a couple of nights ago.  After a bit of peer pressure, he convinced me to sign up to the Twitter so I’ll give that a go this weekend.

Tagged with: art Frank and Bobby Home and Away Maori Justice Twitter

The Art of Nick J Boyd