Leave it to Brisbane to win a Grand Final in the 7th minute of injury time.  The team are the comeback kings of the competition and now they have become the first team to win back-to-back Grand Finals after a highly controversial night at Suncorp Stadium. 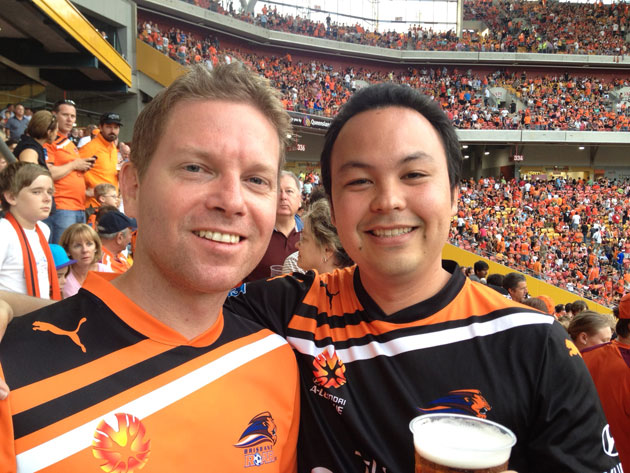 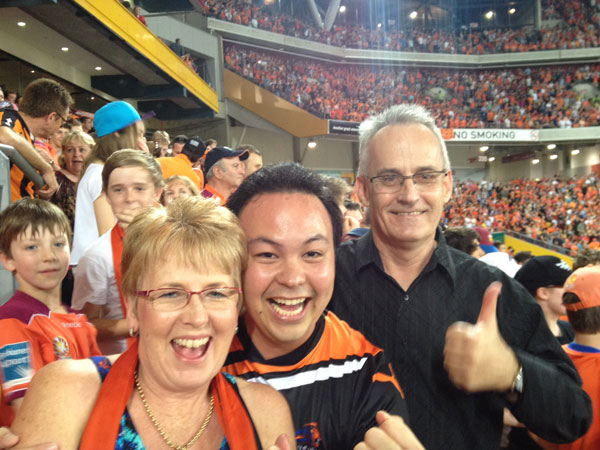 Season ticket holders that sat next to us from Day One 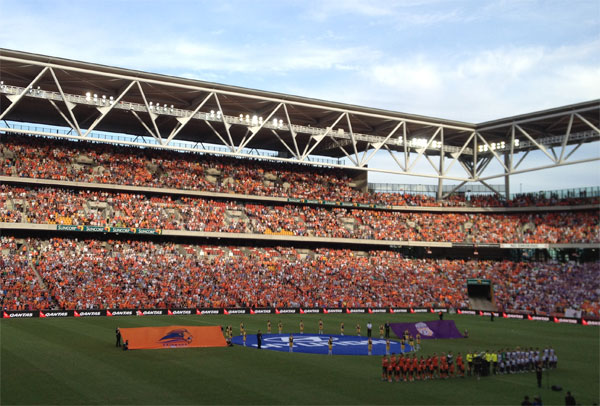 There’s nothing quite like a packed out Suncorp Stadium

The game was dubbed Orange Sunday II by the fans.  Just as last year’s home final, the game was a sellout with over 50,000 fans in attendance.  There was also a decent sized cluster of Perth Glory supporters in attendance – some 2,000 fans making the six hour flight to get to Brisbane.  The stadium was heaving, the crowd was in good voice and the stage was set for a thriller.  It wasn’t quite the spectacle we hoped for but it certainly offered up its share of drama.

For Perth’s part, they played a disappointingly conservative game.  Content to sit back in a Christmas tree formation, they rarely ventured forward and incredibly, they failed to register a single shot on goal in the entire game.  The official stats registers two shots on target but having watched the replay, I believe they are counting two crosses that goalkeeper Michael Theoklitos snatched up.  Their striker Shane Smeltz may have scored eight goals during the finals but the Roar marked him out of the game.  I was impressived with his tenacity however.  He copped an accidental elbow to the face from Roar captain Matt Smith that broke his nose.  He ended up playing for another sixty minutes wearing a Hannibal Lector style mask to hold his face together.  After the game he required fifty stitches and had to have plastic surgery.  What a trooper! 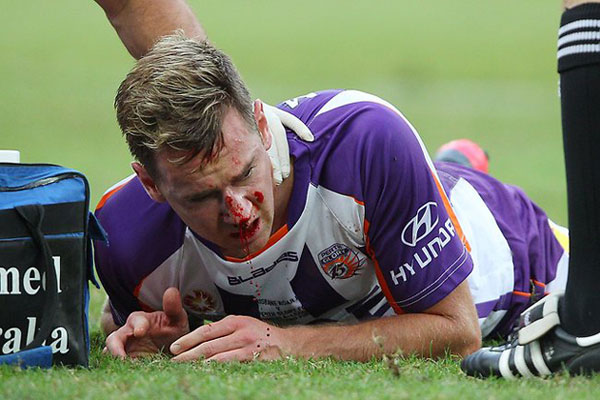 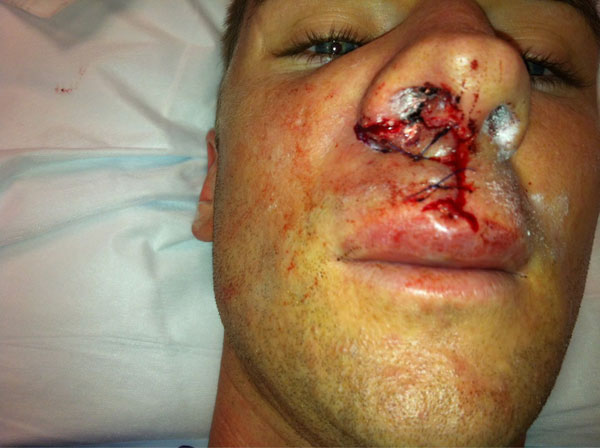 Smeltz required fifty stitches and plastic surgery after the game

The Roar had a couple of decent chances in the first half, with Franjic and Nichols both forcing a save from Danny Vukovic but didn’t fully capitalize on their dominance of territory and possession.

The second half started in the worst way with Glory taking the lead on the 50th minute thanks to an unlocky Ivan Franjic owngoal.  Billy Mehmet made an excellent run forward and after having his initial cross blocked, a second attempt saw the ball bobble through some player’s legs before coming off Franjic into the goal.

From there, it was game on and the Roar lifted.  They always looked like they had a goal in them but time gradually became their enemy.  I was nervous after seventy minutes.  I was anxious after eighty.

The team found an answer in the eighty third minute when playmaker Thomas Broich curled in a pinpoint cross that found Besart Berisha who headed home his twentyth goal of the season.  The stadium erupted.  I lost my composure for a second year in a row and we were back in business.  If only I could bottle those Grand Final Moments when the Roar find the back of the net and the crowd let out that collective cheer.  Those precious few seconds feel absolutely amazing and
make the measely $250 bucks we pay for a season ticket worth every penny.

From there, it felt academic.  The Roar would win.  Perth Glory had no answer, no ideas.  They had struggled to contain our playmakers all game and in stoppage time fullback Dean Heffernan was shown a red card for his umpteenth clumsy challenge.  The Glory were down to ten men and heading into extra time. 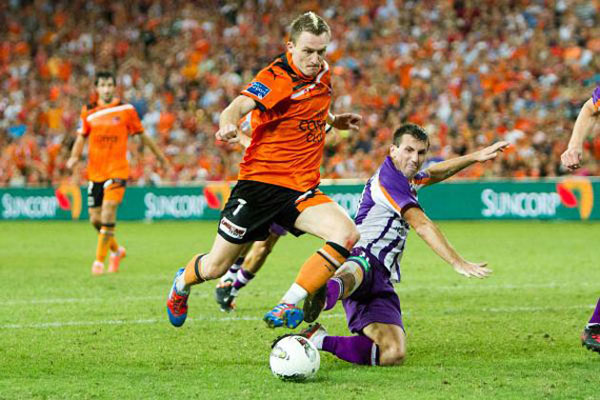 In the final minute of stoppage time, Thomas Broich once again linked up with Besart Berisha who charged through a cluster of Perth defenders.  He went down after airswinging a shot at goal.  A penalty was awarded.  In the 97th minute, Besart Berisha slotted the ball past Vukovic to give Brisbane their second Grand Final win.

In the heat of the moment, I was delighted and had a great night celebrating a successful Grand Final win and a thoroughly enjoyable season. 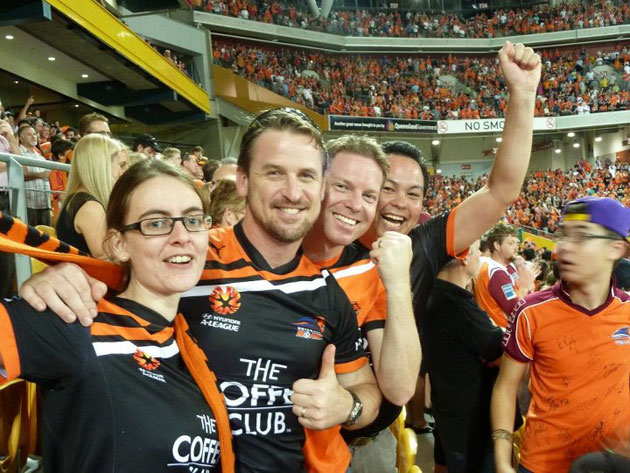 I was pretty happy when we equalized 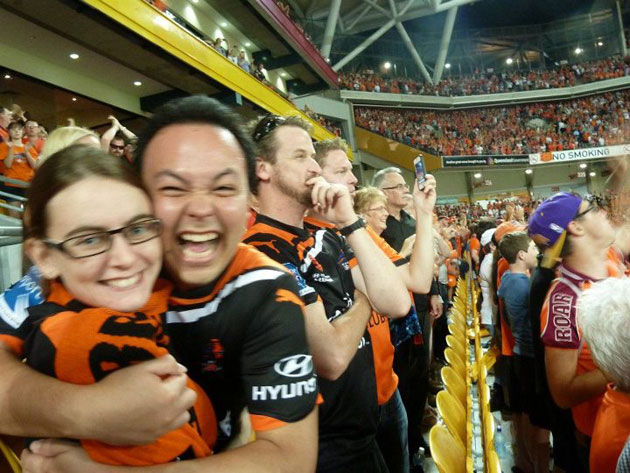 The next day at work, there was plenty of watercooler talk about ‘that’ penalty.  In the video, depending on which angle you look at, Berisha clearly dives or is clearly clipped in the shins by Liam Miller.  Then came the revelation on Twitter that referee Jarred Gillett’s girlfriend works for Brisbane Roar’s media team.  The Joe Marston Player of the Game award was also incorrectly awarded to Thomas Broich instead of Perth Glory player Jacob Burns.  The error was only picked up by journalists comparing votes…on Twitter.  It all added up to a lot of noise and whinging and conspiracy theories from Perth Glory fans.  It bugs me a little bit because they were completely rubbish, had 0 shots on goal, were down to 10 men and were about to be steamrolled in extra time regardless.  Stupid FFA mistakes like getting wrong the Joe Marston medal and chosing a ref for the Grand Final who is dating someone working for one of the teams adds unnecessary fuel to the fire.  I would have preferred a cleaner winning goal.

Fortunately, it doesn’t bother me that much since I felt the scoreline reflected our dominance in the game.  We’ve had plenty of wonky penalty decisions go against us this season, including a dubious one that Perth received to secure a 3-3 draw with us.  I’m happier thinking about how we had another amazing season.  That an awesome dude like Mohammed Adnan who left Bahrain in political asylum got to find some stability in life and play a Grand Final in front of 50,000 people.  That Besart Berisha came to this club, scored 21 goals in his first season and has signed on for another two.  That Ange got his fairytale ending before his apparent move to Melbourne Victory.  I didn’t think I could ask for a better season after last year’s dream run but this year was pretty great when you think about it. 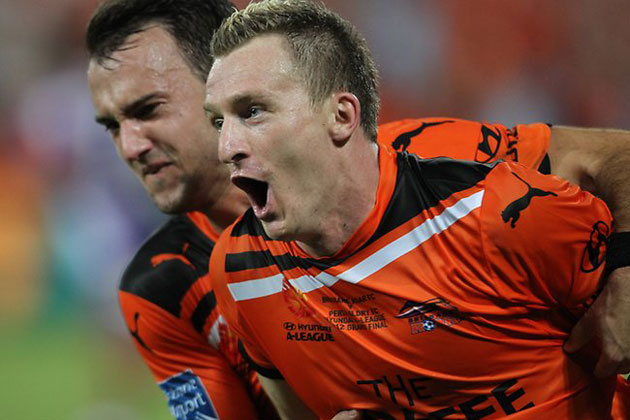 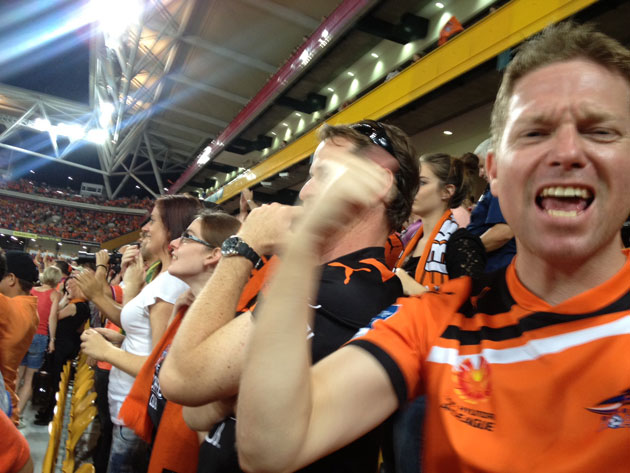 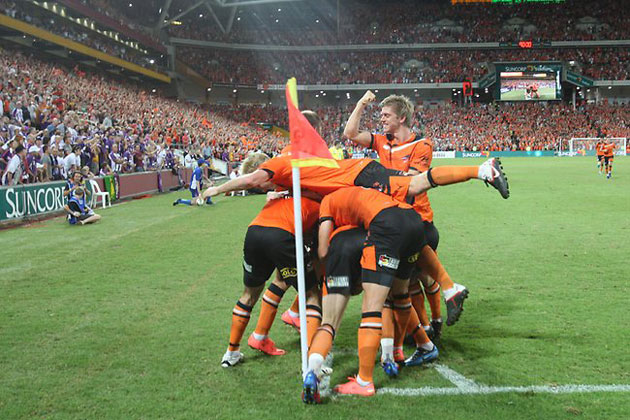 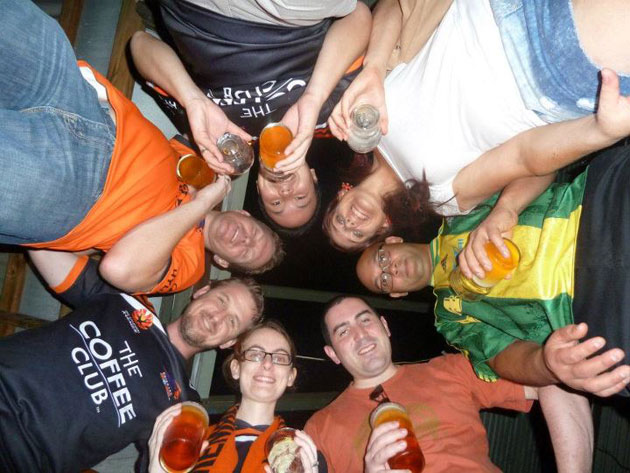 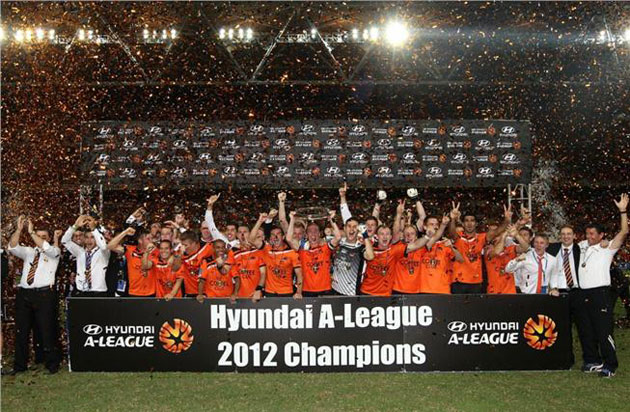 Thanks for the memories Brisbane Roar.  The 2011/12 season has been a hell of a ride.