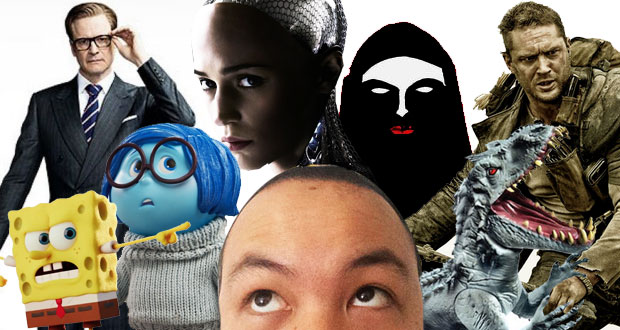 When the dust settles on 2015, it may well be looked back upon as one of the biggest years in the history of cinema.  Just six months in, Avengers Age of Ultron and Fast and Furious 7 have both grossed over a billion dollars and are amongst the ten highest grossing films of all time.  Crazier still, Star Wars VII: The Force Awakens is widely tipped to do even bigger business when it finally arrives in December.

There have been plenty of big budget nostalgia trips in 2015.  You can be excused for wondering what year it is when Jurassic Park, Mad Max and Terminator have all been charting at the box office recently.  Happily, the quality of these films has been much better than anticipated.  When you consider both Jurassic World and Mad Max: Fury Road have been in development hell for over a decade, its a minor miracle they both came out smelling of roses.

I think there’s been a fine selection of movies spanning a wide range of genres in the year already.  Looking at the list of films I’ve seen this year (an even twenty), there’s been solid fare amongst the sci-fi, action, animation and horror genres.  The exciting thing is that the best may be yet to come.  Still on tap for the rest of the year is the new Quentin Tarantino film, the final chapter to The Hunger Games saga, a second Pixar film and of course Star Wars VII.

But for now, in no particular order, here it is, my ten favourite films of 2015 so far. 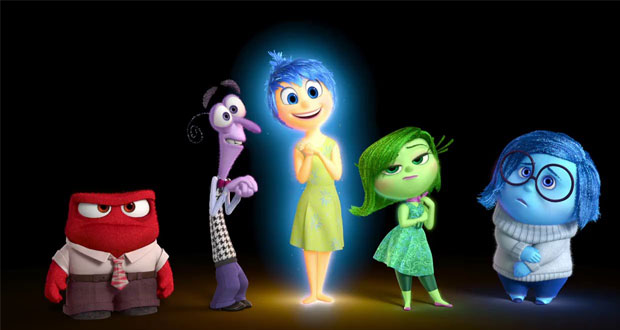 “Crying helps me slow down and obsess over the weight of life’s problems.” – Sadness

Inside Out is the charming and highly inventive new film from Pete Docter, arguable the most accomplished director to work with Pixar.  His previous works include Up, Wall-E and Monsters Inc.  Inside Out exists mostly inside the mind of an eleven year old girl Riley, struggling to adapt to her new life in San Francisco.  The film is like an all ages version of Eternal Sunshine of the Spotless Mind, exploring Riley’s headspace through the lens of five emotional beings that make up her personality.  Docter has always been an ambitious film creator and here he tries nothing less than to teach children why sadness and melancholy are an integral part of the human soul.  Inside Out is funny, charming and heart warming. 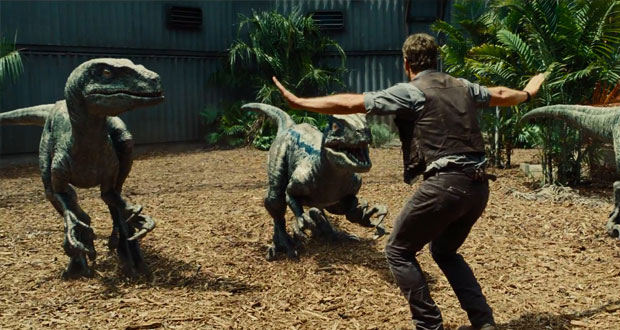 “Corporate felt genetic modification would up the ‘wow’ factor.” – Claire

When its at its best, Jurassic World has action sequences that rival the intensity of the original Jurassic Park.  The genetic frankenstein Indominus Rex is a terrifying new addition to the dinosaur park and thankfully for monster movie fans, the security team at InGen haven’t learned their lesson for a fourth time and they keep this new unstoppable eating machine in an easily escapable enclosure during peak tourist season.  The result is an entertaining thrill ride in which director Colin Trevorrow serves up exhilarating action sequences in spades and gives a respectful nod to the original film.  Easily the best of the Jurassic Park sequels and a fine film in its own right. 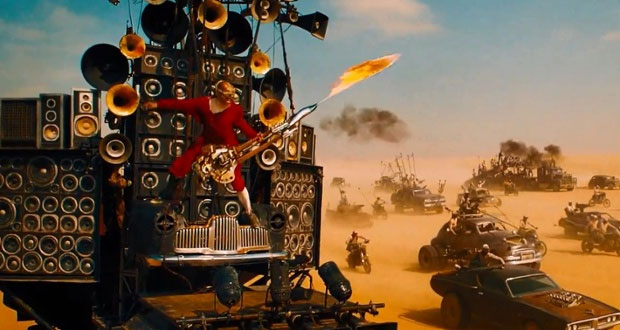 If you had to choose a single frame to represent the films of 2015, surely you couldn’t pick a more instantly recognizable and iconic image than that of Doof Warrior – the masked, jump suit wearing, guitar shredding freak that rides on a truck stacked with amps in George Miller’s Mad Max: Fury Road.  Fury Road has been the surprise package of 2015.  At seventy years young, Miller has breathed new life into the action genre with an unrelenting heart pounding thrill ride and along the way, he and Charlize Theron have helped create a memorable new action heroine in the form of Imperator Furiosa, the ass-kicking, one armed star of the film. 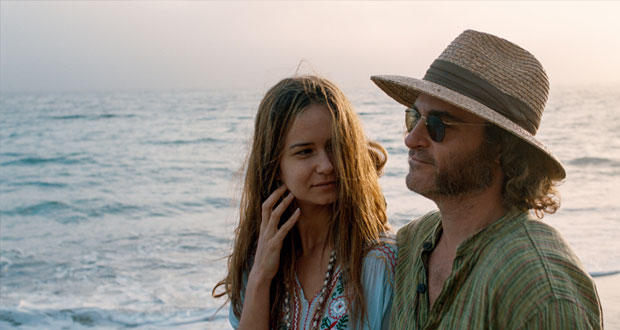 “Well, it’s dark and lonely work but somebodies gotta do it right?” – Petunia

Based on a popular piece of literature written by Thomas Pynchon, Inherent Vice was long considered to be an ‘unfilmable’ tale.  After sitting through Paul Thomas Anderson’s shambling, psychedelic and hilarious neo-noir adaptation (all 148 minutes of it), I think he’s made a pretty good fist of it.  The film is stacked with an oddball cast of mistfits including corrupt cops, cultists, loan sharks and sex workers.  At the centre of this cesspit of crime and corruption is “Doc” – a perpetually stoned private detective who takes on a case looking for his missing ex-girlfriend.  Inherent Vice was every bit as weird, wonderful and indecipherable as I hoped it would be. 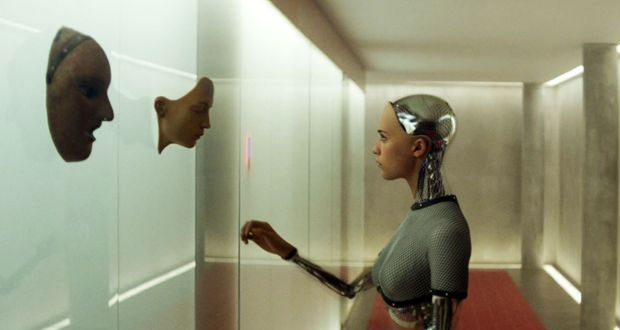 “I am become death, The Destroyer of Worlds.” – Caleb

You may not know the name but Alex Garland is a writer who has been the ideas man behind many of Danny Boyle’s most famous films including The Beach, 28 Days Later and Sunshine.  With Ex Machina he makes his directorial debut with this sci-fi thriller about a billionaire tech mogul Nathan who invites one of his employees Caleb to spend a week at his remote research facility in the mountains.  There he reveals Ava, a robot creation that he is convinced can pass the Turing test.  During a temporary outage of the CCTV feeds, Ava confides to Caleb that she feels imprisoned and needs his help to escape Nathan.  As you’d expect from Garland, nothing is quite what it seems and you have all the ingredients for a clever morality tale about artificial intelligence and what happens when its sophistication makes it near indistinguishable from humans. 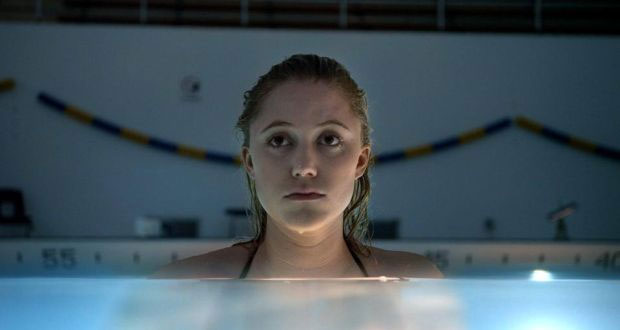 “It could look like someone you know or it could be a stranger in a crowd. Whatever helps it get close to you.” – Hugh

It Follows is a fantastic teen horror film that draws its inspiration from the works of John Carpenter and Sam Raimi whilst still maintaining an identity of its own.  Writer and director David Robert Mitchell shows a real flair for understanding how to set the stage for a supernatural horror of this kind.  There’s a terrifying killer on the prowl, it has strict rules it must adhere to and then there’s a cast of young naive teenagers who are its prey.  The film is handsomely put together with some evocative cinematography that gives It Follows the look of a Seventies or Eighties teen slasher film.  The tension gets ratcheted up another score when you add in the fantastic pulse pounding synth score from Disasterpeace.  Watch this movie in the dead of night with the lights out for maximum effect. 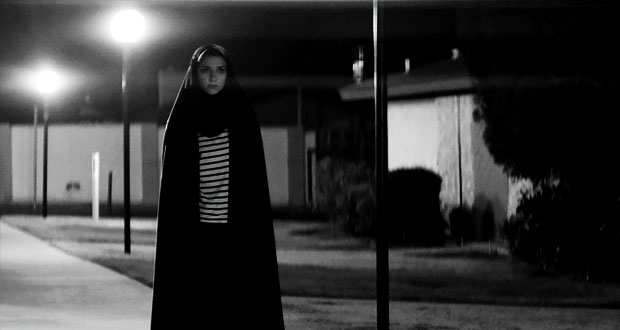 2015 was the year that Netflix finally arrived in Australia and one of the finest hidden gems in its catalogue is the Iranian vampire horror western A Girl Walks Home Alone At Night.  Set in the ghost town of Bad City, a blood sucking shape shifting vampire prowls the streets at night, to the peril of the hapless men who cross her path.  As you can probably guess by its genre categorisation, A Girl Walks Home Along At Night is worth watching because of its unique premise, eye catching visuals and effortless cool. 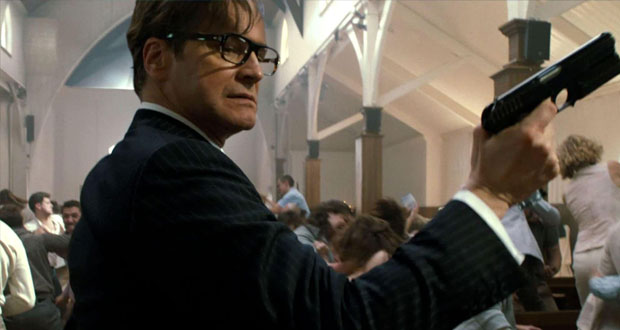 “”Manners maketh man.” Do you know what that means? Then let me teach you a lesson.” – Harry Hart

Who knew British thespian Colin Firth had it in him to be such a great action movie lead?  In Kingsman: The Secret Service, Gary ‘Eggsy’ Unwin is a troubled street kid from England who gets plucked out of a life of hardship and initiated into a secret spy agency that fights international crime syndicates.  Firth plays the Obi Wan Kenobi to Taron Egerton’s Anakin and he is the centrepiece of the film’s greatest scene – a memorable, bone-crunching brawl in a church involving a hundred crazed and blood thirsty Americans attending Sunday service.  The film is directed by Matthew Vaughn whose previous works include Kick-Ass and X-Men First Class as well as production credits on Snatch and Lock, Stock and Two Smoking Barrels so that should give you an idea of what you’re in for. 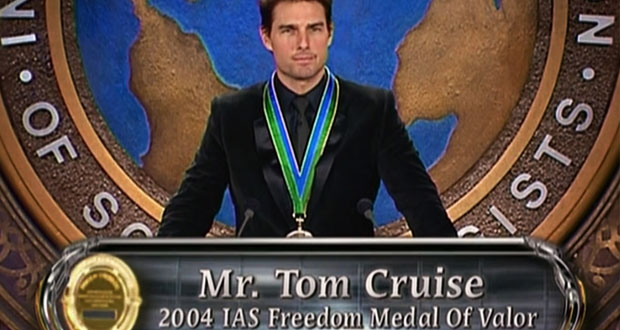 Going Clear: Scientology and the Prison of Belief

“The war is over” – David Miscavige

There have been plenty of exposes on Scientology over the years but none that would rival the breadth of content seen in HBO’s most recent documentary Going Clear which has interviews with some of the most high profile and famous people to leave the church as well as fascinating rare video footage of Scientology gatherings, including a ceremony where Tom Cruise receives a comically oversized Freedom Medal of Valor as seen in the screen shot above.  With a running time of over two hours, I think the film does a pretty solid job exploring the origins of Scientology and the guarded nature of its belief structure before moving on to the more well documented challenges people have faced when they have either tried to leave the church or question the organization’s behavior in a public forum. 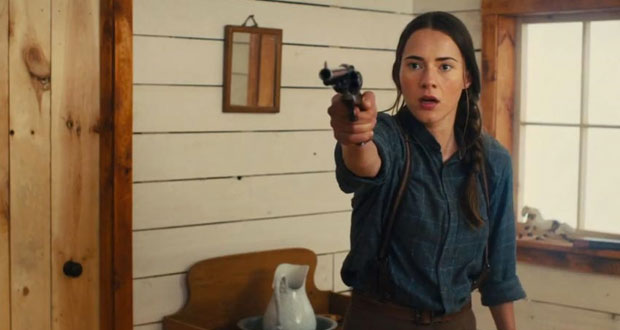 Werner: So, now… East. What news?
Cavendish: Violence and suffering. And West?
Werner: Dreams and toil.

It’s really only been in the last five years or so that I’ve discovered a love of Westerns and begun exploring them – both the classics and the new.  Slow West is the directorial debut of John McClean, a musician who was a part of the Scottish musical group The Beta Band.  With Slow West, he has made an impressive sure-handed first feature that deserves to find a wide audience.  As the name suggests, the film is in no hurry and moves at the same laconic pace as its two stars – Jay Cavendish, a Scottish teenager who has travelled to America in search of his lost love Rose, and Silas Selleck, a seasoned and weary outlaw who takes Jay under his wing and gives him safe passage across the West, for a price.  The film is beautiful to look at – shot in New Zealand of all places – and Jay and Silas’ journey is a touching one.  They cross paths with all manner of folk in their search for Rose and in the final act, the film shifts into a memorable crescendo that I won’t spoil.  Needless to say, I think Slow West represents the best of its genre.  McClean shows an understanding of the characters, tropes and landscapes that make a good Western and then he puts his own spin on it, as he modernizes it and makes it his own.